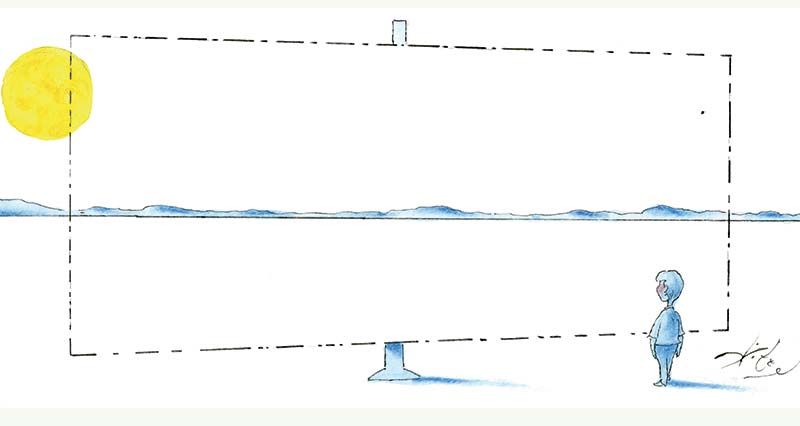 I have wondered many times what it is about far West Texas that I find both uplifting and settling. Miles and miles of wide-open spaces, the big sky—those things make me breathe deep. But ultimately, it is the light that draws me back time and again.

I think that magically lit, great big beautiful nothingness must be what attracts the artists, too. Seven years ago I took my 10-year-old son with me to Marfa to introduce him to a few galleries, and take a measure of his reaction to the artistic wattage.

We went to a show by an artist who worked in deeply textured paint with results as prickly and rustling as the featured landscapes. Elliott was drawn to the bright palette of a splendid salute to hoodoos (the vertical pikes of igneous rock that are a signature of the Davis Mountains). When he turned away, he gave me his first review. He liked this art, he said, because it seemed both strange and familiar. He said he felt like he’d seen it all before, but was also seeing it for the first time.

Always, everywhere, we remarked on the light. Pools of light flooding gallery showrooms. Tickling the mountains, illuminating the grasslands. And, of course, we took in the Marfa Lights, which did not fail to mesmerize.

In the dancing light of a courtyard firepit we’d rehash the day. When Elliott explained how the interplay of shadows and light double an artwork’s impressions on the viewer, I thought: My job here is done.

Making one last stop before heading out of town, we met Jason Willaford. In his studio workshop the artist mixed a magical blend of beeswax, copal, and carnauba wax for his encaustic painting. The process results in a hot, syrupy liquid that, layered onto a canvas and reheated, fuses into an enamel-like finish. Elliott looked bewitched as he watched Jason scrape incisions into that finish and summarize the reductive process: “It’s harder to paint nothing than something,” Jason said.

That observation stuck with Elliott long after the art was out of view. “It’s cool that the nothing becomes what’s beautiful,” he said on the way home.

Maybe that’s the answer, too, to why I find time spent in West Texas so freeing. All the West Texas nothingness is the backdrop to a reductive thought process that allows me to connect the dots of meaning in my life. Beneath the Big Sky, I scrape away all the big city hubbub and discover that less is so much more.