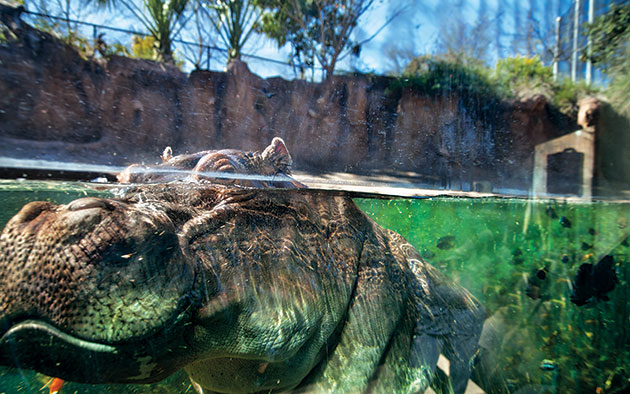 Sunburst glitters across a creature-filled pool on a bright afternoon, piercing the ripples and illuminating the aqua depths.

A school of cichlids flashes their gilded fins against the rays as a hippopotamus breaks the surface and yawns. Gibbons chatter in roundelays of squeaks and squeals from nearby bluffs. Egrets nest in the surrounding treetops. Suddenly, a crocodile glides forward from the watery shadows, eyeing you with interest. Apparently, it’s snack time.

Fortunately, you stand safely behind a glass wall while the croc and its hungry African friends enjoy their three o’clock meal in the San Antonio Zoo’s water-filled section of the Africa Live! exhibit. From your secure vantage point, you and your family can watch zookeepers feed the exhibit’s menagerie, then listen as the keepers address your questions about the critters you see. Just how much, you might ask, does a hippo eat? Not as much as you’d think. And when will a crocodile actually chew its food before swallowing? Never.

Feeding the animals and answering visitors’ questions are just two of the many daily chores handled by keepers at the San Antonio Zoo, which reaches its centennial mark this year. In celebration of the milestone, the zoo has unveiled its Zootennial Plaza in commemoration of a century in service to the world’s wildlife. The plaza, designed to provide a gathering area for both casual and special occasions, features a restaurant and a dazzling, custom-designed carousel.

The zoo provides a home for more than 9,000 animals in its 35 acres of exhibits, representing 750 species from around the world.

A simple gift of land inspired the zoo’s creation, courtesy of philanthropist and San Antonian George Washington Brackenridge. Brackenridge, a native of Indiana, arrived in Texas in 1853 at the age of 21. Shortly after the outbreak of the Civil War, Brackenridge established a cotton trade business, profiting from the war until driven out of the state for his Union sympathies. He returned to Texas after the war ended, relocating in San Antonio to continue his business pursuits, which included banking and publishing. In 1914, Brackenridge deeded a small plot of land to the City of San Antonio for the public viewing of a collection of elk, buffalo, deer, monkeys, two lions, and four bears. Although the menagerie wasn’t the first zoo in the city (the small collection of animals that once occupied nearby San Pedro Park earns that title), the Brackenridge gift and the odd selection of animals formed the genesis of the San Antonio Zoo we recognize today.

In 1928, local San Antonians keen on educating the public about wildlife organized the San Antonio Zoological Society to help guide the progress of the new zoo. Within the next year, an additional tract of land was added to Brackenridge’s gift, including the site of a limestone rock quarry. The property allowed zoo designers to create a new kind of habitat incorporating the quarry’s limestone bluffs as natural barriers, eliminating the need to keep some species in traditional cages. At the zoo’s official opening in 1929, 344 species were on view, many of them occupying the unusual cageless exhibits, a revolutionary design for zoos worldwide at the time. 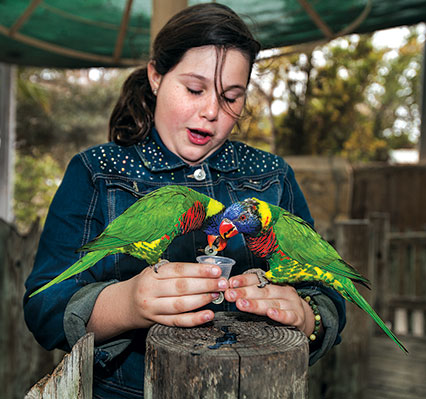 More than 9,000 strong, members of the zoo’s menagerie include these colorful lories native to the South Pacific.

Today, the zoo provides a home for more than 9,000 animals in its 35 acres of exhibits, representing 750 species from around the world. Animals native to Australia, Central and South America, and Asia highlight the zoo’s extensive collection along with a robust selection from Africa. In addition to the Africa Live! exhibit (an indoor-outdoor facility featuring hippos, Nile crocodiles, African wild dogs, colobus monkeys, an aviary, and a termite mound), the zoo’s African species also include lions, zebras, ostriches, and an elephant, all who share much of the zoo’s limestone cliffs exposed a century ago by quarry workers.

Next to the African exhibits, a favorite zoo feature called Lory Landing entices visitors into an open-air environment where a large flock of colorful, parakeet-like birds called lories fly freely within the confines of a “cage” defined by tented netting. These lively entertainers, native to the South Pacific, will perch on your shoulder, on the top of your head, and even on the tip of your finger, especially if you’ve provided them with a little nectar to sip (available for purchase). They also like the salt in human sweat in the summer. Be prepared to experience their brush-like tongues tidying up your face and forearms.

In the summer of 2013, the zoo added an especially unusual member to its family of animals on view—a two-headed turtle. A year old in June of this year, “Thelma and Louise” delight zoo visitors with their sideshow-like appearance and have gained so many fans they now have their own Facebook page. The curious-looking Texas cooter is a result of twin embryos that didn’t quite separate completely but continued to develop, resulting in two fully formed and functioning heads on a single body. Although uncommon, Thelma and Louise appear healthy, enjoy meals, and, according to their Facebook page, have become BFFs.

Education and outreach are two important aspects of the zoo’s mission, accomplished in part by informative animal encounters led daily by zoo staff and volunteers and taking place throughout the exhibit grounds. A schedule of the zoo’s encounters can be found on the zoo map and brochure, provided free at the entry gate and on the zoo’s website (www.sazoo.org). Encounters, which highlight interesting facts about the animals and often include feeding, are headed by knowledgeable personnel and feature creatures like tigers, king vultures, Komodo dragons, and birds of the Africa Live! aviary (who get treated to a bug toss). 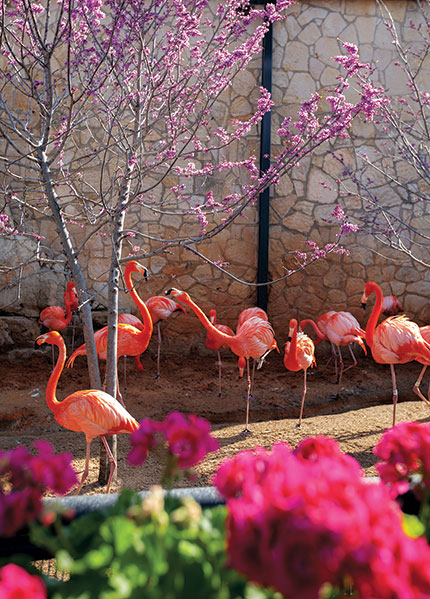 Caribbean flamingoes blend in with the pinks of spring.

Conservation also plays a leading role in the zoo’s mission. Participation in conservation programs has earned the zoo “firsts” in a number of landmark achievements, including the first reproduction of an endangered white rhino outside Africa, the first to exhibit the endangered whooping crane, the first to exhibit the rare addra gazelle, the first to hatch and rear Caribbean flamingos in captivity, and the first to build an amphibian conservation center. The zoo participates in more than 230 endangered species breeding programs, several targeting species native to Texas. As an active participant in the Association of Zoos and Aquariums’ “Species Survival Plan” (SSP), the San Antonio Zoo helps to manage the breeding of captive animal populations in order to maintain genetic diversity throughout zoo and aquarium populations nationwide. In addition to breeding programs, SSP participants engage in research, education, field projects, and species reintroduction. Results help ensure species survival for both captive and wild populations.

The zoo’s contribution to the Whooping Crane Recovery Program is of special interest to Texans. Initiated in 1956 when only 16 known whooping cranes remained in the wild, the zoo’s efforts have involved hatching and rearing whooping crane chicks, several of which have been released into their native habitat. Captive propagation by program partners like the San Antonio Zoo has helped increase the native whooping crane population to more than 500 birds to date, making great progress in securing the gene pool for this important and imperiled migratory species.

While the whooping crane occupies a special place in the hearts of Texans, it has also captured a key position on the Zootennial Plaza’s custom-designed carousel. In fact, the Zootennial Carousel, the highlight of the Zootennial project, features four animals familiar to all Texans—the endangered whooping crane, the white-tailed deer, the horned lizard, and the imaginary jackalope. The unique carousel features 60 animals in total, comprising four tiers of beautifully crafted and hand-painted creatures. The Texas natives are joined by a menagerie of real and imaginary animals like the white ostrich, a seadragon, the hummingbird, a tiger shark, and a polar bear. Two chariots, including a spinning “bird’s nest,” complete the collection of carousel rides. This remarkable work of carousel art is a creation of Chance Rides, one of the premier roller coaster and mechanical ride design and manufacturing companies in the country.

The San Antonio Zoo gives Texans a place to explore the fascinating animals populating our world and, with the addition of the Zootennial Carousel, in our imaginations as well. But the zoo also serves as an important link between humans and the natural world, particularly for those of us who may never get the chance to see the planet’s wildlife in their native habitats. In an age when animal populations are increasingly threatened and endangered, conservation-guided entities like the zoo help to enlighten minds and reverse declines, admirable efforts that, at 100 years old, are certainly worth celebrating.