Written by Art Williams, Photographs by Will van Overbeek | From the May 2016 issue | Updated: May 11, 2016 | Filed Under: detourTRAVEL 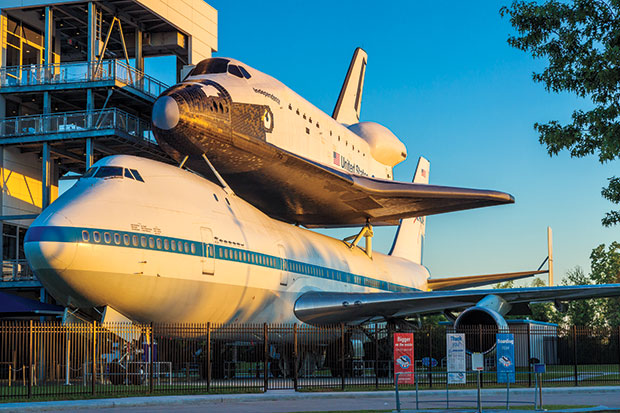 Together, the shuttle and airplane reach a height of nearly 80 feet and span 232 feet in length. This new attraction, called Independence Plaza, is the only one of its kind. While real shuttles can be seen elsewhere, none are attached to an actual shuttle carrier aircraft, and you’re only able to see them from the outside. At Independence Plaza, you can explore the interiors of both vehicles, gaining an up-close perspective offered nowhere else on earth.

This triumph started as a disappointment. When the Space Shuttle Program came to an end in 2011, 29 sites across the United States vied for the retired orbiters. As home to NASA’s Johnson Space Center, the Bayou City seemed like an obvious fit, but Houston lost out to Washington, D.C., Los Angeles, Cape Canaveral, and New York City. As a consolation, the Kennedy Space Center offered Houston its 20-year-old replica shuttle, Explorer.

To Paul Spana, exhibits manager at Space Center Houston, the replica at first seemed like a booby prize, but he soon realized that it came with some advantages. Whereas the interiors of flown orbiters are inaccessible to the public in order to preserve them, the replica could be fitted with exhibits to showcase the history of the Space Shuttle Program. “I never thought I’d say it was a good thing we didn’t get a flown shuttle,” says Spana, “but it opened doors we didn’t know existed.” The center also held a contest to re-name the orbiter, and Independence was the winning submission. “It’s a good Texas name,” Spana affirms.

To accommodate the carrier and orbiter, Space Center Houston created a 1.7-acre outdoor plaza and an eight-story structure to house the necessary elevators and stairwell to access the vehicles. Visitors pass by the huge engines of the 747 before taking an elevator up to go inside. This aircraft, called NASA 905, was the first of only two used in the Space Shuttle Program, and served on about three-fourths of the missions. In its former life, the carrier was an American Airlines passenger plane from 1970 to 1974. Although a few of the original first-class seats remain, the rest of the interior was gutted to reduce the weight for missions, and Spana has subsequently filled it with exhibits.

Inside, visitors encounter artifacts such as a 747 “black box” and pig-iron blocks used as ballast. These artifacts are scattered among displays that explain Johnson Space Center’s crucial role in the Space Shuttle Program. Here, in the 1960s, scientists conceived the idea of a reusable space vehicle. However, returning the shuttle from one of its landing sites, such as Edwards Air Force Base in California, to its launch pad in Florida proved to be a major challenge. NASA engineers Owen Morris and John Kiker championed the idea of using a plane to transport the shuttle back, and their 1/40-scale model of an orbiter atop a carrier is on display. A nearby video loops grainy footage of some of their experiments with radio-controlled models at Ellington Air Force Base (now Ellington Airport). 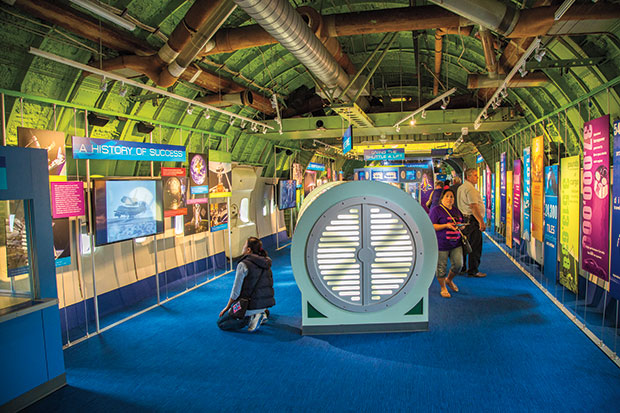 At Space Center Houston, you can engage with exhibits inside the historic 747 used to transport orbiters back to base.

Several other video monitors throughout the shuttle carrier feature original NASA footage, TV reports of shuttle launches, and interviews with astronauts discussing their experiences in the orbiter. In the middle of the fuselage, interactive exhibits address engineering issues; stress test and wind tunnel simulators allow visitors to activate buttons to maneuver orbiter models to overcome these challenges. A Mate-Demate simulator requires up to three people to coordinate efforts to move a model shuttle carrier aircraft into position, then align and lower an orbiter onto its back using a crane. Toward the rear of the plane, three kiosks with touch-screen monitors give visitors a behind-the-scenes look at activities taking place at the adjacent Johnson Space Center (such as testing a rover on rocky terrain made to resemble the surface of Mars), a look into the various jobs at NASA (including lesser-known yet relevant careers such as nutritionist), and which jobs may suit them best. (I was happy to learn, after answering a brief series of questions, that I would make an excellent flight director.)

After exiting the plane and taking an elevator up to the next level, visitors can venture inside the orbiter replica to check out the flight deck and peer through a Plexiglas barrier at the control panel, with its multitude of switches. Stairs lead down to the mid-deck, where a video shows astronauts floating in zero gravity, with spoons and wrenches drifting weightless about the room. These cramped quarters house a “kitchen” (a bank of cabinets), a not-so-discreet toilet, and small lockers for equipment and the astronauts’ personal effects. A bright orange spacesuit and a sleeping bag (attached by Velcro to the wall) hang nearby.

Beyond the mid-deck, the payload bay has been retrofitted with a catwalk flanked by a wall-mounted timeline of the Space Shuttle Program, which ran from 1981 to 2011 and entailed 135 missions. One of those missions involved moving a satellite into a higher orbit. The metal cradle used to transport a rocket motor to boost that satellite can be seen at the back of the payload bay, accompanied by a video of the astronauts hard at work during the task.

Overall, Independence Plaza successfully conveys the magnitude of what NASA accomplished during the Space Shuttle Program, and no other shuttle display matches its scale. At the opening ceremony, on January 23, 2016, Fred Griffin, chairman of the Manned Space Flight Education Foundation, praised the outsized ambition of the new attraction: “You know the saying ‘Everything is bigger in Texas?’ Well, you know what? It is.”