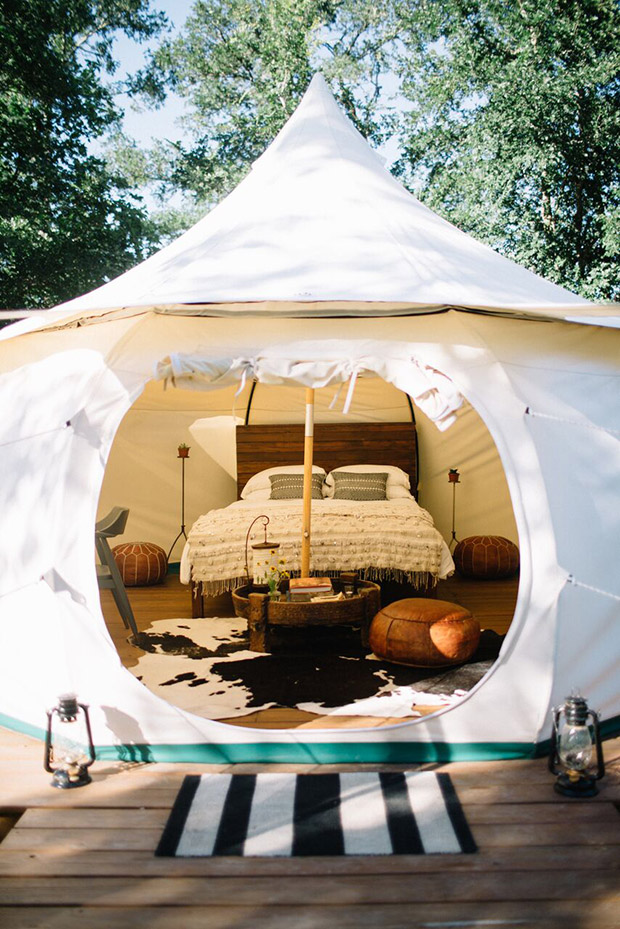 Glamping: A combination of “glamorous” and “camping” that blends great outdoor adventures with the comforts of home or a hotel. It’s the perfect merger of ideas for people who want to connect with nature without disconnecting from comfort.

Texas rises to the challenge of catering to this niche market as glampsite offerings are popping up across the state. Accommodations range from charming tepees and yurts (wooden-framed tents) to trailers and luxurious safari-style tents with indoor restrooms and kitchens.

That means, with glamping, you can enjoy more time assembling s’mores over a campfire and gazing up at the stars, because the readied sites eliminate the need to haul and assemble tents and camping equipment.

“Texas is perfect for glamping because of the weather and outdoor lifestyle,” says Kelly Ostendorf, who travels throughout Texas for her company, Contentment Camping. The company sets up safari tents, with real beds, at music and antique festivals, weddings and events.

“The whole concept is much bigger in Europe, but it is growing in the U.S.,” she says.

Apparently, it’s getting bigger in Texas, as well. Contentment Camping, which started in New York, expanded to have an office in the Lone Star State last year after the company started getting more business in Texas than one office could handle.

While Contentment Camping is event driven, there are plenty of permanent sites for a civilized camping experience throughout the state. More are popping up each year.

Although most of the state’s glamping sites are found in the Hill Country, we sought out places throughout the state and looked for a range of amenities and prices – from simple to indulgent.

No matter where you live in Texas, there’s likely something nearby. And if it sounds like a great idea to you, know you’re not alone. Demand is high for glamping sites. Plan ahead.

Look to Texas’ state parks for an array of lodging options, from rustic screened-in shelters and full cabins to a resort hotel, but the most unusual are the yurts at Abilene State Park. For $50 a night, plus the park entrance fee, you can get a camping upgrade by staying in one of the five-person yurts, which include double/single bunk beds and a pullout couch or futon. Each yurt also has air conditioning, a refrigerator, microwave, and a coffee pot. Restrooms and showers are nearby.  Bring your own pillows and sheets. They’re not provided, but it’s a far cry from lugging in and setting up a tent. During the day, you can take a dip in the pool or explore the park’s nature trails and structures, many of which were built in the 1930s by the Civilian Conservation Corps.

Glamping on the Farm

One of Texas’ newest glamping options is just a half-hour’s drive from Austin. Established in June 2015 by a couple of self-described city folk, Green Acres started with one Marrakech-style yurt for rent, which proved so popular that they quickly had to add another artistically decorated yurt. Each can fit families of up to four; however, smaller tents can be added to accommodate more. Amenities include a modern bathhouse with a shower and washer and dryer, a fully-equipped outdoor kitchen, vintage barn, hammocks, and a corral fire pit perfect for making s’mores, which are provided by Green Acres. Hike the nature trails, or try your skills on the trampoline and half-pipe skate ramp on the property.

Pets are not allowed; however, guests are invited to feed and hang out with the miniature donkeys, alpacas, and cats that call the property home. There is no wireless access on the property, so be prepared to truly unplug.

This peaceful glampsite is surrounded by organic farms and is about 10 minutes away from the famous barbecue town of Elgin. 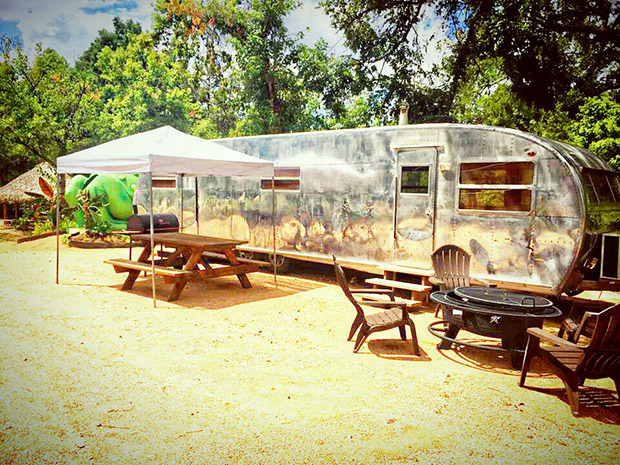 Son’s Island is a three-and-a-half acre island on Lake Placid that is part daytime fun with thatched-roof, day-use cabana rentals and part peaceful island nights for those renting one of two vintage RV trailers.

The 26 cabanas, including water, electricity, barbecue pit and floating boat dock, make this a great spot for families and water lovers. Large cypress and pecan trees keep the island cool during the day while playing volleyball or a game of horseshoes or washers. Guests can bring their own boat, rent a kayak or paddleboard, or use the waterslide or rope swing to jump on in.

Once the island shuts down for the night (between 5:30 and 7 p.m. depending on season), only those renting the two vintage RV trailers are allowed to stay overnight. With the whole island to yourself, you can wind down in a hammock or cook dinner over the fire pit.

“People love the experience and return for more,” says Best Texas Travel owner Byron Riedel. He owns four properties around New Braunfels and Seguin, but he said that this is his most unique one. He purchased the lush island last year and fixed it up after the floods. Busy season runs Memorial Day to Labor Day and the island will close during the winter, so plan ahead. If the trailers are full, check out Geronimo Creek Retreat, another of Riedel’s nearby properties. It features four tree house cabins and five tepees along a spring-fed creek.

Often described as magical, Sinya is an African safari tent for two nestled comfortably into the hillside overlooking Lone Man Creek. Owner Lynn Gallimore had the tent shipped from South Africa so that she could bring a taste of her time in Tanzania to Texas.

Sinya, named after an orphaned elephant in Kenya that Gallimore fosters, is as glamorous as tents can get, with billowy ceilings, heating and air conditioning, Turkish towels, a king-size bed, and an indoor restroom with an antique claw-foot tub. During the day, you can hike in the creek bed or fish by the dam, but most people like to just relax and hang out on the hammock or soak in the Japanese hot tub, according to Gallimore. You also can indulge in a massage on the veranda.

A small kitchenette, complete with herbs and spices, is provided, as is a grill.

Sinya attracts people from all over the world, but most of Gallimore’s guests are Texas artists, musicians, and couples looking for a romantic retreat, many of which return time and time again. 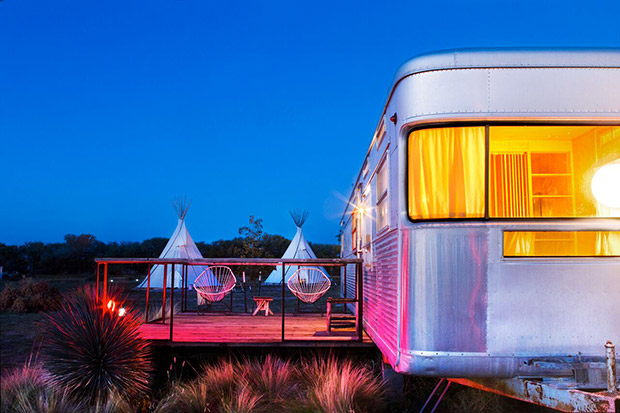 A Simple Wonder out West

Getting to El Cosmico is an adventure in itself. Located in the remote West Texas town of Marfa, this chic modern-day campground is a three-hour drive from the nearest town of El Paso, but that’s more of a draw than a deterrent. Since artist Donald Judd set up shop in Marfa in the 1970s, this charming one-stoplight town has been a magnet for adventurous and creative souls, and recently it has garnered the attention of hipsters and celebrities—most recently Beyoncé—as well. El Cosmico was the creation of attorney-turned-hotelier Liz Lambert, who wanted to return to her roots in West Texas and capture the spirit of the land. Everything on the 21-acre property is about simplicity, community and a concept described as “Dolce Far Niete,” or the freedom to do nothing. Among the trailers, safari tents, tepees, and yurts dotting the desert landscape are a communal bathhouse and kitchen, a hammock grove, wood-fired hot tubs, and a lounge (the only place where you can get wireless access). Wander into town to check out the art galleries and dining options representative of the town’s quirky spirit, such as the Boyz2Men food trailer and the Museum of Electronic Wonders & Late Night Grilled Cheese Parlour. At night, head to the Marfa Lights Viewing Center, nine miles east of the town, to try to get a glimpse of the mysterious glowing orbs for a truly otherworldly experience.