Written by Art Williams, Photographs by Brandon Jakobeit | From the November 2015 issue | Updated: October 13, 2015 | Filed Under: made in texasTRAVEL 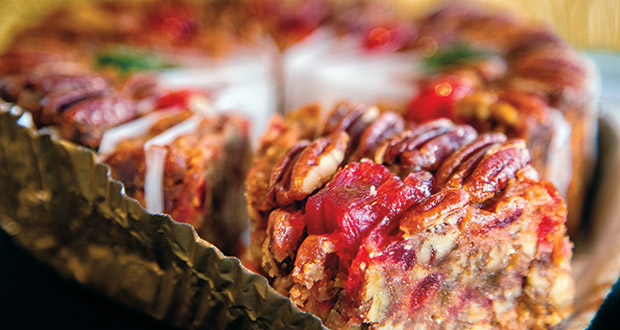 My family’s love affair with the chewy and crunchy good taste of Collin Street Bakery’s DeLuxe Fruitcakes began years ago when we sent a cake by mail-order to my in-laws.

The Original Collin Street Bakery and Headquarters is at 401 W. 7th Ave. in down-town Corsicana, with additional stores just east of Corsicana and in Lindale, Greenville, Waco, and Tyler. Call 903/874-7477 (original Corsicana store).

The cake—loaded with pecans, cherries, dates, pineapple, and papaya—was so well-received that we expanded the list of recipients each December, but it wasn’t until recent road trips to Louisiana and Mississippi that our family had the opportu-nity to visit the original, historic Collin Street Bakery and Deli in downtown Corsicana. Now, even though there are Collin Street bakeries throughout east-central Texas, the original sweet shop is a regular stop when we’re passing through—exactly what we need to break up a long drive.

If your nose wrinkles with aversion at the suggestion of fruitcake, Collin Street Bakery’s vice president, Hayden Crawford, proclaims, “Then you haven’t tried ours yet!” Even though more than a million customers worldwide enjoy the bakery’s holiday delicacy every year, Crawford says he understands why fruitcake has long suffered from a bad reputation. “The problem for fruitcake is that there is a lot of generic product out there. Our fruitcake isn’t like that,” he says.

In the days before refrigeration, says Crawford, homemakers often candied fruits to preserve them. These fruits, along with pecans and other nuts, made their way into dense, sweet Thanksgiving and Christmas cakes that stored well in a family’s root cellar, a common feature of many houses back then.

Collin Street’s recipe, which originated more than a century ago with German immigrant and master baker Gus Wiedmann, has only been tweaked slightly over the years. The story of how the bakery came to be goes something like this: After arriving in Galveston from Europe sometime in the late 1890s, Wiedmann set out to join northern family and friends by train. When he ran out of money, he disembarked in Corsicana and founded a bakery, which specialized in bread and other staples—including fruitcakes when customers wanted them—while it began to develop a mail-order following. In 1940, Collin Street Bakery was sold to seven investors, including Texan Lee William McNutt Sr., who often claimed that the fruitcakes helped him win the affection of his future wife. Some seven decades later, grandson Bob McNutt is the third generation of the McNutt family to lead the company’s operations.

This continuity has contributed to Collin Street’s success, Hayden Crawford asserts, but he believes the real reason the company has survived so long is the quality of ingredients it uses. “Here in Corsicana, we have one of the world’s largest pecan shelling plants. Our nuts come from Texas and Oklahoma and are the native, hard-shelled variety, not the thin-shelled variety you find at the grocer. They’re full of flavor. And our cakes are about one-third nuts.”

The cakes also contain pineapple and papaya from the company’s private organic farm in Costa Rica. Golden Sultana raisins from California, candied cherries from Washington state, locally sourced honey, and a bit of batter hold it all together. The farm in Costa Rica grew out of necessity, says Crawford. “We got so big, and we need-ed so much product. It was a way to prevent delays and deal with shortages in the market. Growing our own fruit in Costa Rica allows faster turnaround and quality control.”

Each cake—whether it’s a two-pounder, three-pounder, or party-size five-pounder—comes packed in a signature red tin decorated with an old-fashioned holiday scene. The cakes themselves are topped with a mosaic of hand-placed pecans, cherries, and red and green chunks of pineapple, and look especially pretty on a holiday table. Collin Street also sells bite-sized morsels called DeLuxe Fruitcake Petites; they’re packed in gold-foiled trays similar to chocolates and come 12 to the box.

And Collin Street offers more than fruitcakes. Harkening to its roots as a bread baker, the Corsicana store produces a half-dozen types of specialty breads, including dill, jalapeño, whole wheat, and bacon-cheddar, which employees use to build gourmet sandwiches. You can enjoy them—along with salads and soups—in a dining room just off the main shop. We’ve gotten ours to-go sometimes for an impromptu roadside park picnic. The egg bread is silky perfection; it makes a great edible souvenir that freezes well.

Besides the fruitcakes and breads, the Corsicana display case includes four varieties of the company’s popular pecan cakes, along with cheesecakes, sand tarts, lemon sugar cookies, fruit-filled oat-coconut cookies called Princess Squares, and maraschino-studded Cherry Ice Box Cookies, which Crawford says are a favorite of many customers. He’s personally loyal, though, to the company’s Chocolate Pecan Cluster cookies, which combine dark chocolate, egg white, and crisp rice cereal. “They’re crunchy on the outside and chewy on the inside,” he says.

If you’re undecided, the staff is happy to let you try before you buy, offering generous samples—whole cookies, not just a nibble. Whenever I visit, I can’t help but wish that every day started with such hospitality.

Thankfully, the road to Corsicana runs two ways, allowing us to stop by in each direction to and from our trips. But whether we visit in person or receive a mail-order delight, Collin Street Bakery offers sweet satisfaction.