Learning to Cherish Moments of Uncertainty 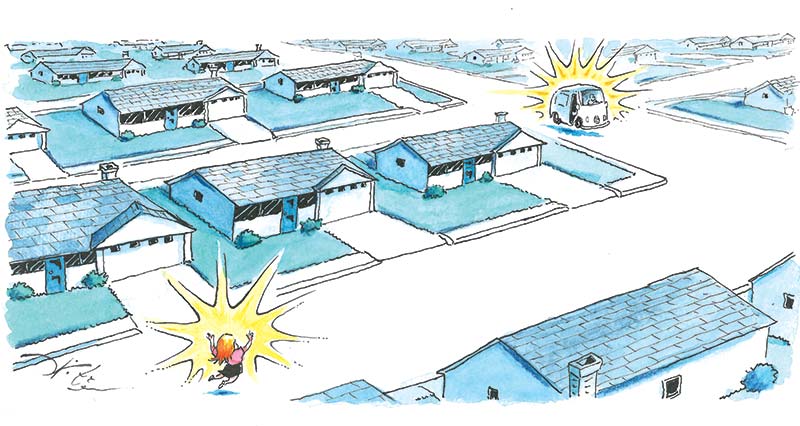 When I was six years old I got lost.

An older girl whom I didn’t know came skipping by my house and invited me to hers. I dutifully followed her, crossing many streets—breaking all the rules—until we paused at the end of a driveway. Then she bolted, glancing once over her shoulder before dashing into the house and slamming the door. No amount of knocking produced a response. After a few minutes, I squared my shoulders and determined to find my way home.

That proved impossible. We lived on Sheppard Air Force Base and all the houses looked alike. The streets were named for planets. I might have navigated my way to Jupiter Street if only I’d known a little astronomy.

I walked and walked, every noisy step of the tap shoes I had taken to wearing daily making things worse. I sat down on a curb to cry. That’s when I heard the familiar rattle: Ernie was coming. Everyone knew Ernie. He delivered crisply starched uniforms right to our doors. His white van was as familiar as the Popsicle truck.

I gave Ernie my father’s name and rank and he immediately delivered me to my anxious mother. Soon after the tears dried, the day became an adventure I bragged about.

It was 20 years before I got lost again. My husband and I had met up with our best friends for a getaway on a ranch outside Buda. The accommodations were a rustic, two-room stone ranch house filled with a great many mismatched beds and a bare bones kitchen. It was chilly most of the year, given its insulation-free construction, but there was always a fire to stoke and the river twinkling by. We loved everything about it.

When we were settled in, we played the requisite number of card games, then wandered the riverbank looking for arrowheads, whiling away the day.

The guys were law students and, as we walked, there was much rehashing of opinions on statutes and teachers. We soon left the river banks and stumbled through cedar thickets, yakking and laughing as we lost track of time. When we finally stopped chattering long enough to note the sun hovering above the horizon, the day took a chilly turn. We realized we were lost.

I didn’t remember Ernie then, although I should have when we first recognized the rumbling of a truck somewhere close, the engine whining to conquer the rutted terrain. We headed for the sound and found a small man methodically emptying his truck bed of feed corn. We introduced ourselves, Kathryn mentioned her family’s adjacent ranch and we explained our predicament. Stone faced and silent, he sized us up. Then he laughed. Belly-laughed.

Basically, he thought we were complete idiots. But he kindly offered to take us where we belonged if we could tolerate bumping along as he finished up his chores. Kathryn and I were invited inside the cab, an invitation we leapt to accept as by now our fingers were numb with cold. When he dropped us off, we built a bonfire of gratitude and sat a long time beneath the stars.

I’ve traveled around the world since then and not lost my way in places both far-flung and otherworldly. In the age of GPS and cell phones, it is no longer easy to get lost. Sometimes navigators lead me wrong, like the one in a rental car that insisted a grain silo outside Amarillo was my destination. Sometimes, I leave the path on purpose. Often when I travel, while I have a destination in mind, I intentionally don’t plot a course. Once it took a great many strangers and a lot of sign language to direct me to Tokyo’s famed fish market.

I try to cherish moments of uncertainty. I think sometimes that with so much sure-footedness we may have lost the chance to chart our own adventures.