Paddling the Mission Reach of the San Antonio River 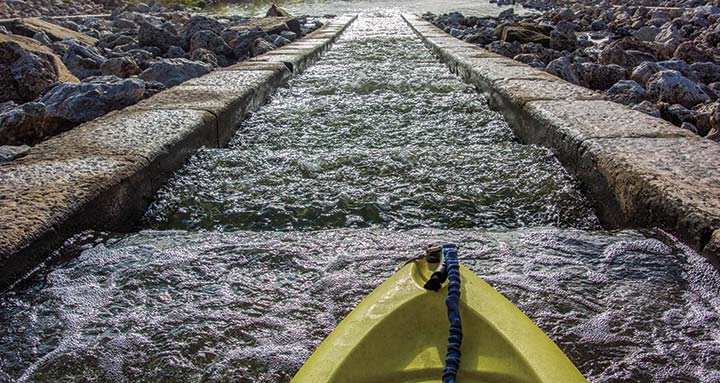 The river rounds a bend and six mossy-backed turtles sunning on a row of rocks drop into the water—plop, plop, plop, one after the other, as if in a water ballet. Ahead, the shores pull farther apart and I see several bright white egrets and yellow-crowned night herons standing statue-like at the waterline. A breeze ripples the tall grasses around them.

For information, including recreation and history, call the San Antonio River Authority at 210/ 227-1373.

I almost forget that I’m paddling a kayak on the San Antonio River just a few miles from bustling downtown San Antonio. While most people are familiar with the city’s River Walk—that horseshoe-shaped bend of the river lined with restaurants, shops, and hotels—fewer know this stretch, dubbed the Mission Reach. It runs eight miles from Roosevelt Park, just south of downtown, to Mission Espada, passing Missions Concepción, San José, and San Juan along the way.

In the first half of the 18th Century, the San Antonio River attracted the Spanish missionaries who founded these pioneering outposts, as well as Mission San Antonio de Valero (the Alamo). Together they represent the largest collection of Spanish colonial architecture in North America and have been nominated as a World Heritage Site. All but the Alamo remain active Catholic parishes and are part of the San Antonio Missions National Historical Park.

The San Antonio River Authority and the U.S. Corps of Engineers channelized the river and built a series of dams in the 1960s and ’70s to control flooding. Now, the River Authority, working with other governmental entities, is transforming this portion back to its original state. The project includes restoring natural contours and plants to the shorelines, which are home to 15 miles of hike-and-bike trails and about a dozen paddling access points on the river, marked by blue buoys.

It will take decades for the restored native plants to flourish, but already grasses and wildflowers have turned the banks into a riot of color and texture. The restoration project included planting 20,000 trees and shrubs representing 39 species, such as walnuts, cypress, and possumhaw, and more than 60 species of native grasses and wildflowers, such as bluebonnets, scarlet sage, and prickly poppy.

My river trip starts at Roosevelt Park, where Jack Michel, co-founder of Mission Kayak, drops me off with a kayak, paddle, and life jacket. “We started this because we had a big place in our hearts for making things happen in this city,” says David Morin, co-founder and owner of Mission Kayak. “We thought it would be cool to give people the opportunity to enjoy the extension of the River Walk out on the water.”

After launching, I soon encounter the first of dozens of “chutes,” the concrete water slides that make it easy to navigate a kayak through rocky rapids. Soon, I float under Interstate 10, then through Concepción Park. My route passes three missions, each a short distance from the river. But unless you can lock up your kayak, paddling isn’t the best way to visit them.

Paddling the Mission Reach is relatively easy—the trip is suitable for beginners—which gives me time to sit back and observe my surroundings. I travel through a constant symphony of the melodious calls of red-winged blackbirds, native residents lured back by the restored vegetation. A pair of red-tailed hawks circle above at one point, taking off and landing from a towering cottonwood, one of many old trees lining the banks above the flood line. Ducks and cormorants flee from my approach, flapping noisily downriver. Every now and then, a fish splashes next to the boat, most likely a bass or catfish.

The water occasionally slips beneath the stone bridges of the hike-and-bike path, where cyclists wave and walkers stop to watch me navigate the chutes. In some places, both banks are wild, making for a nice mix of solitude and company.

I encounter more chutes, the most memorable at San Juan Dam, where the chute gradually drops six feet down over its 125-foot length. After about three-and-a-half hours and five miles of paddling, I approach Espada Park, where Espada Dam creates a wide point in the river called Davis Lake—a popular spot for kayakers to paddle around and practice. The hike-and-bike and paddling trails continue on to Mission Espada another two-and-a-half miles to the south, but I’d have to portage around Espada Dam to continue, and shuttle service from below here is not yet available. So I stop at the blue buoy marking Mission Kayak’s tent, next to a row of brightly colored kayaks for rent.

Michel bounds over to help me out of the boat. “Wasn’t that great?” he asks, beaming. The man is clearly a fan of the paddling trail, and now so am I. On the short drive back to my River Walk hotel, I hear a well-deserved Mexican-food dinner calling my name.