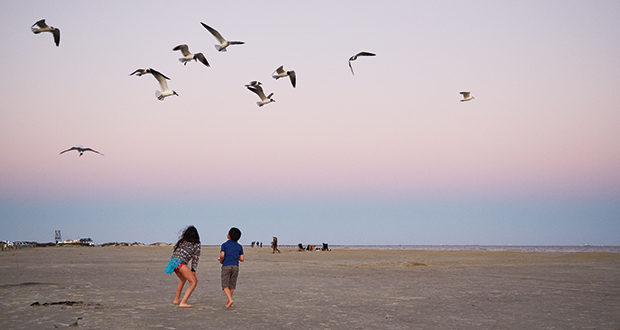 Head east down Seawall Boulevard in Galveston, past the lights and activity of Historic Pleasure Pier, beyond the elegant Hotel Galvez and Stewart Beach Park’s broad expanse of sand dotted with blue umbrellas and beach toys, through tangles of grasses and mangroves on either side and, just past a tranquil lagoon before the pavement dead ends at water, turn right onto Boddeker Drive.

Welcome to East End Lagoon, where locals have come for decades to swim, fish, birdwatch, and otherwise enjoy nature.

“When I was a small child, before World War II, families had little cabanas in front of the Seawall on that end of the island,” former Galveston Mayor Lyda Ann Thomas says. “There was a Beach Club and a dock for sailboats. Our families went there for picnics, and we swam in the lagoon.” In a home movie made by one of Thomas’ great uncles in August 1930, kids run on the sand, women wear one-piece suits and bathing caps, and men sit in the surf.

After the war, the Beach Club moved, and the cabanas gradually washed away. Families began to go elsewhere, Thomas says. This eastern tip of the island, owned by the federal government, sat ignored for years.

Thomas served as mayor from 2004 until 2010. She recalls local businessman and philanthropist George Mitchell insisting she do something to preserve the east end. “He believed this acreage could be a destination for people interested in nature, an asset Galveston has to offer not only to our own citizens but visitors as well,” she says. “The Army Corps of Engineers gave title to the property to the city in exchange for a commitment to keep it wild. The city is mandated, if you will, by that gift from the federal government, to keep the area and enhance it for people who love nature.”

Beginning in 2009, the city parks board and Galveston Island Nature Tourism Council took on the task of transforming these 685 acres into a nature park and preserve. Currently, the land is open for a variety of activities, including fishing, birding, and kayaking, but improvements call for making it more accessible by adding trails, a pavilion, viewing platforms, and launch areas for canoes and kayaks. This work will be done in phases as funding is secured, with the vision to offer a natural experience and leave the land as untouched as possible. Long-term, the park staff plan to provide environmental education and interpretive programming in the pavilion, Thomas says.

In addition to the lagoon, the site contains wetlands, ponds, upland prairie, and beaches. These natural habitats once covered all of Galveston Island but have disappeared from much of it. Keeping what remains has benefits beyond recreation. Beaches offer protection from storms, while lagoons, marshes, and wetlands provide habitat at some point in the life cycles of many ocean species. A variety of wildlife depend on beaches and prairies, including birds, coyotes, and rabbits.

Any future structures will be built on upland property, says Sheryl Rozier, project manager with the Galveston Park Board. “We are sensitive to the ecosystem here. That is overarching throughout the project.” 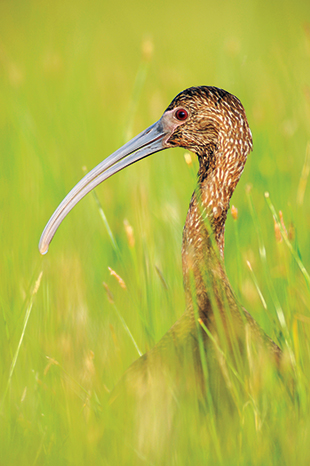 Galveston resident and volunteer guide Alice Anne O’Donell leads birding tours for the Galveston Island Nature Tourism Council and monthly field trips for Galveston County Audubon Group, here and elsewhere on the island. Common bird sightings at East End include a variety of ducks, hawks, sandpipers, and terns. Cormorants, egrets, herons, and ibis frequent the lagoon, while birds seen on the beach and in grass and pond areas along the road include black skimmers, gulls, terns, rails, and, in season, bitterns. Four species of plovers—piping, snowy, semipalmated, and Wilson’s—can be seen frequently throughout the year. Galveston Island boasts as many as 300 bird species, including year-round residents, spring migrants, and late wintering birds.

“You can bird right from the road at East End,” says O’Donell, who has seen birds right out her car window, including white herons standing in cordgrass, their white plumage in stark contrast to its green, and osprey perching on poles and tall trees. “Birding is best here in the evening, though, with the sun behind you.” People also bird from kayaks in the shallow lagoon.

The jetties along the channel off Boddeker often fill with anglers. Common catches here include trout, red drum, and flounder, and crabbing is also popular in the park. In addition to fishers and birders, this area, known as Big Reef, attracts those who like to watch giant ships and barges pass by.

Local outfitter Artist Boat offers guided kayak trips on the lagoon and other local outlets rent stand-up paddle boards and provide lessons. Everyone with their own human-powered watercraft is welcome to paddle the lagoon at no charge—in fact, access to the entire park is free and will remain so.

Whether visitors come to look for birds, reel in a fish, walk along the surf, paddle a kayak—or all of the above—East End Lagoon offers a place where anyone can make like a local and experience the untamed side of Galveston.