4 for Fall: The Autumn Trails

When the timing is right, these four points around the state put on a splendid seasonal show 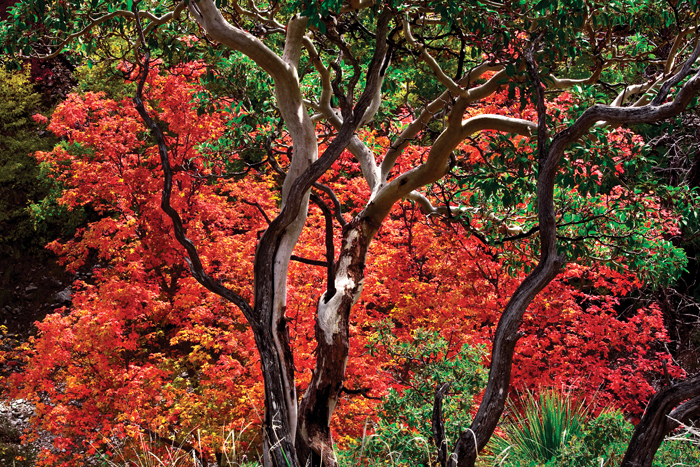 The trails through McKittrick Canyon are relatively easy and wind among a range of brilliant fall colors. (Photo by Laurence Parent)

The coming of fall lights certain swaths of the Texas landscape with bursts of flame-colored leaves painted red, gold, and yellow, creating the image of a blazing sunset before the long night of winter. Many plants, in fact, spend that wintry night slumbering in a hibernation of sorts, with autumn’s impressive display a visual side effect of their preparation for sleep.

Trees, along with other plants, spend their summer days transforming sunlight into sugar through a process called photosynthesis. This seeming alchemy uses a substance called chlorophyll, which gives leaves their green color. Winter provides inadequate light and water for photosynthesis, so as days grow shorter, many trees simply turn off the process, and their chlorophyll fades away. Other colors present in leaves now become visible, including yellow-orange carotene, yellow xanthophylls, and red anthocyanin. Tannin, a leftover byproduct, creates the final brown color that characterizes the last stage before the dead leaves fall from the tree.

The shorter days and longer nights of late summer and early fall trigger this sequence of events, according to Damon Waitt, senior botanist at the University of Texas at Austin’s Lady Bird Johnson Wildflower Center. Weather conditions also influence the amount and intensity of fall color. A warm, wet spring followed by a mild summer, and a sunny fall with cool-but-not-freezing nights, along with moisture in the soil, create the best results. Specific plants have characteristic colors; oaks and maples turn red, yellow, and orange, while aspens and cottonwoods glow yellow. The timing of color also varies by species. Many oaks, for example, turn colors long after other trees have lost their leaves. With so many factors at play, fall never looks the same twice. This year’s drought caused most plants in many parts of Texas to lose their leaves or change color early, says Texas Parks and Wildlife Department botanist Jackie Poole. But we found four areas that, thanks to consistent moisture, should still offer an impressive show of color this fall.

This year’s drought caused most plants in many parts of Texas to lose their leaves or change color early, says Texas Parks and Wildlife Department botanist Jackie Poole. But we found four areas that, thanks to consistent moisture, should still offer an impressive show of color this fall.

This former ranch, now a Travis County park, tucks into a bend of the Pedernales River with almost three miles of river frontage. Kevin Connally, Senior Natural Resource Management Specialist for Travis County, says the park is a popular destination for mountain bikers, hikers, and rock climbers, as well as anglers.

Fall color at Reimers Ranch starts with cedar elm, which turn from yellow to orange then red before dropping its leaves. More color comes from vines such as poison ivy (Toxicodendron radicans) and Virginia creeper (Parthenocissus quinquefolia), which can sport orange and a red nearer to deep maroon.

Timing of peak color depends on weather, of course, but Reimers Ranch typically bursts into color after a few cool fronts. For 2009, predictions suggest that an El Niño event building in the Pacific during late summer is likely to bring Central Texas a cool and wet fall, and should generate a photo-worthy display of colorful foliage.

Stands of bigtooth maple weave a fabric of bright reds, yellows, and orange, which are particularly vivid along two-and-one-half miles of this popular canyon’s hiking trail. In addition to its high concentration of bigtooth maples, says Ranger William Leggett, the canyon also sports gray oak, gold chinkapin oak (Quercus muehlenbergiz),and rosy desert sumac (Rhus microphylla) shrubs. During the growing season, gray oak is not gray, but more dull green or even grayish green. It is considered to be deciduous or subevergreen and can grow in drier sites than the chinkapin oaks, which typically grow along the base of the canyon walls and along the stream bed, as well as on the terraces above the canyon floor, and in isolated spots on the slopes.

McKittrick Canyon’s color usually peaks around the end of October or the early part of November, Leggett says, because the weather is generally very mild then, with daytime temperatures hovering in the 60s.

“To get a good impression, you need to walk into the canyon,” Leggett says. “The best area is about two-and-a-half miles up to Pratt Cabin. The next mile, up to the Grotto, has the biggest concentration of maples. From that point, you start to climb up McKittrick Ridge and it becomes strenuous. But it takes you up for amazing views of the canyon, real panoramas of color.” The trail is well marked and well maintained, and hikers will find a convenient picnic area at the Grotto. As you plan your hike, remember that McKittrick Canyon is a day-use area, and the gate on the highway is locked after 6 p.m. through Nov. 1 and 4:30 p.m. starting Nov. 2. If you don’t get back by closing time, you could face a seven-mile walk back to the campground.

Walnut and sycamore trees turn around early October, says John Stuart, park superintendent, with maples starting to follow as nights get cooler later in the month. The maples typically peak in early November and last about two weeks, then start to drop their leaves by mid-November, ending up mostly bare by Thanksgiving. Note that for autumn of 2009, the combination of heat stress and drought has caused some maples to start turning earlier than usual.  The oaks turn in late November or early December, typically after a freeze. The greatest concentrations of maples occur on the East Trail, with red and lacey oaks more common on the West Trail. Stuart writes a foliage report on the park Web site, updated every Wednesday or Thursday from October through November.

Stuart expected average or below average color at Lost Maples this year. “The big maples made a lot of seed after a four-inch rain back in spring. When they do that, they don’t make as much color,” he said. “It’s all in the Lord’s hands what kind of color we get in any particular year. If we get cold nights and sunny days, that makes the best color. Warm nights and rain, cloudy days, the worst color.” On weekends during fall, park visitors wait in line for two to three hours just to get into the park, Stuart warns. Weekdays are much less crowded.

Woods of mixed pine and hardwood surround this 45-acre, man-made lake in East Texas’ Davy Crockett National Forest. Fall color around Ratcliff Lake comes from sweetgum (Liquidambar styracifiua) and red maples (Acer rubrum), set off nicely by a backdrop of bald cypress (Taxodium distichum), which typically lose their leaves later and are common around the lake. From 1906 to 1920, the lake served as a mill pond for a commercial sawmill. In the 1930s, the Civilian Conservation Corps rebuilt the lake, explains U.S. Forest Service employee Pearlie The CCC cut and milled wood to build a bathhouse and picnic shelter, both still in use. Some of the mill’s rock foundation remains in the recreation area, which now features an additional covered pavilion as well as fishing piers, a swimming beach, boat ramps, campgrounds, and trails. The one-and-one-half-mile Tall Pines hiking trail, marked with blue tags, or three-quarter-mile accessible trail, marked with yellow tags, both begin in the picnic area and provide all visitors a way to wander among the fall colors. The 20-mile Four C National Hiking Trail, marked with white tags, also originates in the Ratcliff Lake Recreation Area.