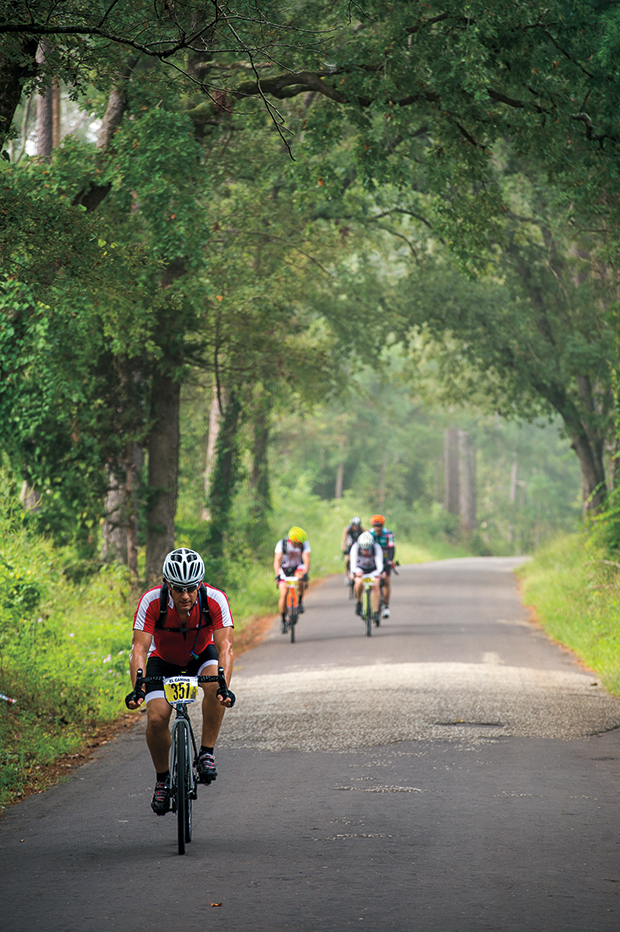 We rise before daybreak to a chorus of birdsong and pump up our tires. It’s the morning of my first gravel grinder, a gritty and popular organized bicycling event that mostly takes place on unpaved roads. As I sip my coffee and slip on my bike shorts, I hope the past few weeks of spinning over the potholed streets of southwest Houston, where I live, will be enough to carry me across the finish line. I have convinced Perry, an old mountain-biking buddy, to join me on El Camino 205, an annual grind that traverses the Piney Woods outside of Palestine.

The Camino is not a race, so we don’t have to worry much about competition. But as we roll into the Palestine old town square, I feel the anxious tickle of butterflies in my belly. Perry and I have registered for the 65-mile version of the ride, which organizer Dave Morrow explains has been extended to 70 miles to avoid some of the sand bogs along the course. The Camino’s signature 205-mile route actually intersects the historic Camino Real linking Louisiana and Mexico, one of several Spanish trade routes between missions and colonial settlements established in the late 17th century and used by merchants and military forces until the end of the 19th century. A 25-mile ride on paved roads provides new cyclists an introduction to the touring experience, while saddle-hardened riders might choose the 105-mile route skirting the Davy Crockett National Forest.

“Bicycles have been used through history for all sorts of surfaces,” says Morrow, a 63-year-old former road racer who waxes poetic about East Texas scenery. “We just thought that if we could find someplace that is close enough to the major metros, where riders can get into the country and not spend more time in the car than you would spend riding your bike, then we could put on this great event.”

Our band of 65 or so riders on the 70-mile route follows a police escort out of town, where the fun begins. East Texas may not have the limestone cliffs and escarpments of the Hill Country, but anybody who thinks the Piney Woods are flat would do well to think again. The course we follow undulates between forested uplands, flower-strewn prairies, and sandy swales formed not long after dinosaurs had been wiped off the face of the earth some 60 million years ago.

Lately, adventure cyclists and endurance athletes across the country have embraced rides like this to test their mettle. Texas gravel grinds include the Texas Chainring Massacre north of Dallas-Fort Worth (Jan. 27, 2018) and the Iceman’s Challenge at the Talbert Ranch near Waco (Dec. 2, 2017). The godfather of the Lone Star gravel rides is probably the Castell Grind, held annually in April. Chas-ing empty farm roads deep into the Hill Country near Llano, the Castell event offers 62-mile, 45-mile, and 31-mile options.

Despite the grueling distances, gravel grinders in the United States tend to be more democratic affairs than traditional road races. Events such as the Camino and Castell evince a “come-one, come-all” ethos, with participants more interested in casual camaraderie than crushing the competition. (The Camino provides a meal and serves free beer at the finish line.) At least that’s Perry’s and my experience, as we pass other riders and in turn are overtaken—huffing along dusty, forgotten country roads where the French and Spanish once vied for control of the region.

Through the years, Perry and I have spent many hours pumping burly mountain bikes across Texas and beyond, but for the gravel grind we managed to find steeds better suited for lengthy rides over rough roads. Bicycles in this category come with knobby tires, disc brakes, and the sort of “drop” handlebars associated with road racing bikes like those seen in the Tour de France. (For the Camino, bicycle-maker Jamis loaned me a Renegade Exploit, which retails for about $2,000.) 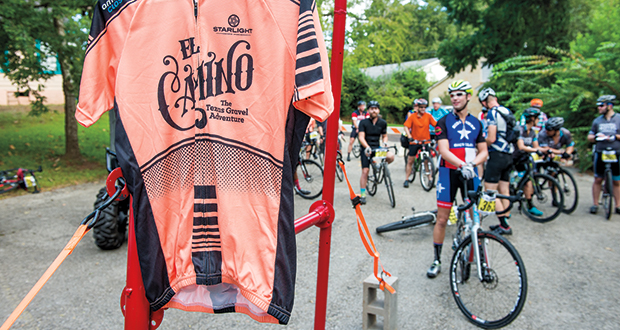 With gravel grinding gaining traction nationwide, Texas is well positioned to become a major player. According to the Federal Highway Administration, the United States has more than 1.3 million miles of unpaved roadways. The exact number of dirt roads (including gravel, shell, and stone) in Texas is hard to pinpoint, but a 2015 TxDOT report tallied about 83,000 miles of unpaved county roads across the state.

There’s a disconnect between the primitive conditions we tackle on the red-dirt track of the Camino and the 21st-century technology of our bikes. Yet this ability to explore rustic landscapes relatively unencumbered is one aspect that draws people to gravel grinding as a sport. Unlike mountain biking, you can sit up and enjoy the vistas and passing country without risking a crash, and unlike speeding along city streets or busy highways, you don’t have to worry about vehicle traffic.

As Austin-based journalist Ian Dille, a competitive cyclist who authored The Cyclist’s Bucket List: A Celebration of 75 Quintessential Cycling Experiences, says: “The great thing about gravel grinding is it’s fun. It makes me feel like I’m a kid again.”

For the most part, as we skirt the dappled woods past horse pastures and lowing cattle, Perry and I share that sense of freewheeling excitement. But before we roll back into Palestine for burgers and beer at the cozy Pint & Barrel Drafthouse, a last brace of big hills sparks my lumbago and drops my speed from 12-15 miles per hour to a pathetic 6 mph. What started out as a great gravel baptism turns into a slog for the ages. With gritted teeth, I pedal past the timekeeper. The entire circuit takes just about seven hours.

On the drive home, I stop by the shady Mission Tejas State Park southeast of Palestine to see traces of the original Camino Real. Poking around the park’s Mission San Francisco de los Tejas, a replica of the first Spanish mission in the Texas territory built in 1690, I feel a kinship with those early settlers. As a newcomer to gravel grinding, I still managed to prevail against the odds and have discovered a wild new frontier.