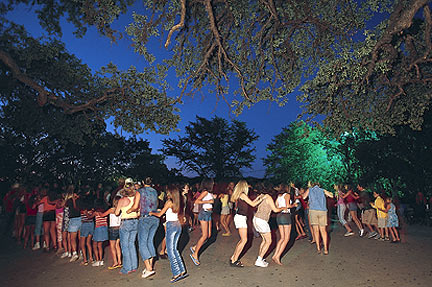 In the 1930s, workers from the Civilian Conservation Corps started Garner’s famous summer dance party for their own entertainment.

On a sweater-cool October day, I stood in Garner State Park in solitude and silence, watching the clear Frio River rolling through, silver sunlight reflecting from the washboard ripples of its shallow stretches. The surfaces of the water’s deeper pools wore blended shades of blue and green. Massive cypress trees lined the water’s edge, their gnarled roots crawling around the trunks like grizzled pythons. Downriver towered Old Baldy Mountain, the legendary limestone bulwark at the park’s south rim. I strolled beyond the picnic area through shady pecan and oak groves where squirrels scurried across scattered campsites.

“Garner is so tranquil, so relaxing,” I thought, “without the summer throngs.” Almost simultaneously another thought countered, “But it’s not really Garner without the people.” I sensed and sanctioned what thousands know: The essence of Garner can only be found by pairing the natural beauty of the park with the people who nurture the Garner Park mystique. To these generations of families, Garner is not just a campground or an idyllic vacation spot. It is a passion, almost a shrine, and a trip to Garner like a pilgrimage.

Even before its official opening, in 1941, Texans began to discover the park’s charms. “I came to Garner in 1939 with my family,” recalls Frank Wahl of Sinton. “Like most flatlanders, we were hooked when we saw the Frio River valley and those hills. To us it was like being in Colorado.” Since that initial visit, Frank has been to Garner every summer except for his years in the military. In 1959, Frank met his wife, Irene, at Garner. Through six decades, they’ve continued the Garner tradition Frank’s parents started.

“One day in the early Seventies,” said Frank, “Irene and I decided to take the family to Disneyland. Our two kids came in about an hour later and asked, ‘So, when are we going to Garner?’ When we explained that we couldn’t go to both places, the kids changed their minds. So we didn’t go to California. We went to Garner. Amazing!”

Numerous parents of different generations relate similar tales. Terry Lankford, a retired state police officer from Austin, remembers a time in the Eighties when his children rejected Disney World in favor of Garner. In the late 1990s, Jim and Annette Beeler of Austin offered their teenage daughters, Amber and Charissa, the choice of a Caribbean cruise or camping in Garner State Park. “Let’s go to Garner!” they begged.

Garner’s smorgasbord of summer pastimes—not to mention its beautiful river and Hill Country setting—explains the park’s enduring appeal. Tubing, swimming, and floating the clear, cold river. Swinging out from a cypress tree on a rope, suspended for a nanosecond over the water—then dropping into its icy embrace. Gathering rocks from the river’s bottom in shallow spots and building your own dam. Whiling away an hour or two in a paddleboat. Watching the ducks and geese waddling along, seeking handouts from picnickers. Savoring the scents of smoke and barbecue wafting from picnic sites where families occupy every table and others wait to snag the next one available.