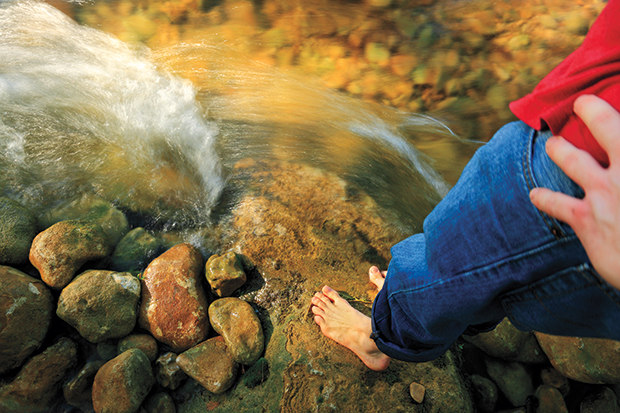 There’s something about the summer solstice that inspires adventure. As the official start of summer and the longest day of the year, the solstice illuminates a world of possibility with more than 14 hours of daylight. On June 21 this year, the sun will rise at 6:30 in the morning and shine until 8:36 at night. What better excuse to explore the outdoors?

7. Guadalupe River: The Ingram Dam, about eight miles west of Kerrville on Texas 39.

I was pondering this potential last June as reports from around the Hill Country carried news of a rainy spring that had replenished the aquifers and swelled creeks and rivers. Numerous watersheds bisect the Edwards Plateau as spring-fed rivulets flow into creeks and rivers en route to the Gulf of Mexico.

Other parts of the world have their natural wonders, but it’s hard to beat the summertime satisfaction of swimming in a pristine Texas Hill Country river. Add the summer heat of late June, stretch the day into solstician proportions—and a refreshing challenge began to take shape. “How many different rivers could I swim in in one day?” I asked myself, pulling out a map and gauging the distances.

I scanned the state southwest from Austin and walked my fingers across the map’s squiggly blue lines, hopping from river to river like playing a game of Chutes and Ladders. I envisioned a western loop from Austin to Concan and back—an excursion across scenic Hill Country canyons, savannas, and river bottoms with stops for plunging into cold rivers, hiking rocky trails, and snacking on small-town eats.

A plan in place, I set my sights on a nine-river day. 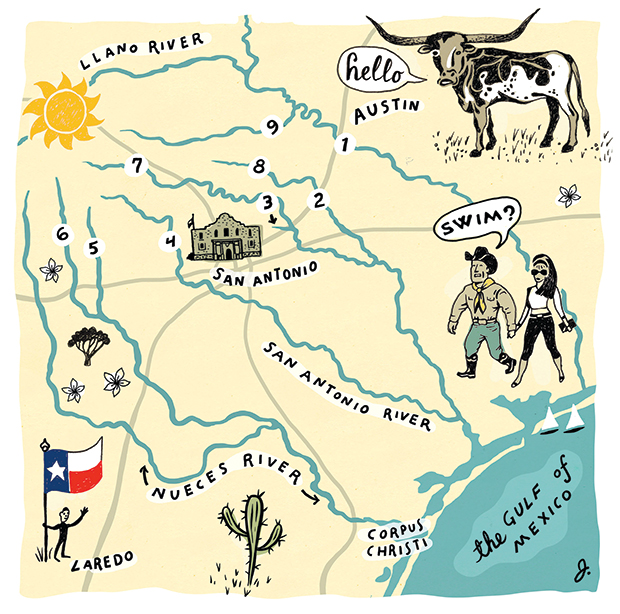 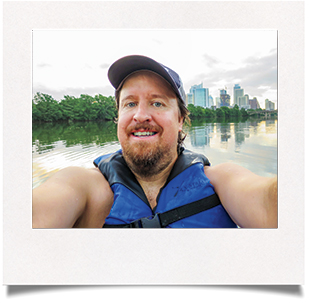 TH Associate Editor Matt Joyce is brainstorming adventures for the 2017 summer solstice. Share your ideas online in this story’s comments section below.

A speck of yellow light flickered across the ebony waters of Lady Bird Lake as I launched a rental kayak from the Texas Rowing Center dock and paddled my way into the pre-dawn darkness. The speck was a fishing skiff, my only company on this stretch of the Colorado River in downtown Austin at 6 a.m.

As I paddled downstream, the pale light of daybreak revealed the sights and sounds of the city waking up. Runners churned along the gravel hike-and-bike trail looping the lake, the hum of traffic grew, and the first rays of sun illuminated downtown’s glassy buildings in reflected shades of lavender and peach.

I navigated up the Barton Creek inlet to the spillway below Barton Springs Pool, watching the water’s surface simmer with rising fish and swarms of swifts swooping for insects. Landing the kayak on a dirt bank, I dove into the water for a refreshing jolt. It wasn’t until I emerged that I realized I had interrupted a photographer’s daybreak photo shoot with a tattooed bikini model. Only in Austin…

The morning was cool and comfortable, but signs of the day’s gathering heat mounted as an angle of sunshine widened across the shady lawn at Sewell Park at Texas State University.

Devouring breakfast tacos from nearby Lolita’s Cafe, I peered over the canopy of pecan trees and watched sunlight engulf the red spires of the 114-year-old Old Main, the oldest building on campus.

I held my breath and jumped into the San Marcos River’s cleansing current, brushing my feet against the wispy, kelly-green leaves of Texas wild rice—a species found only here. Floating downstream, I pictured the water burbling from the Edwards Aquifer into Spring Lake, the river’s headwaters only 1,000 feet upstream from the park. 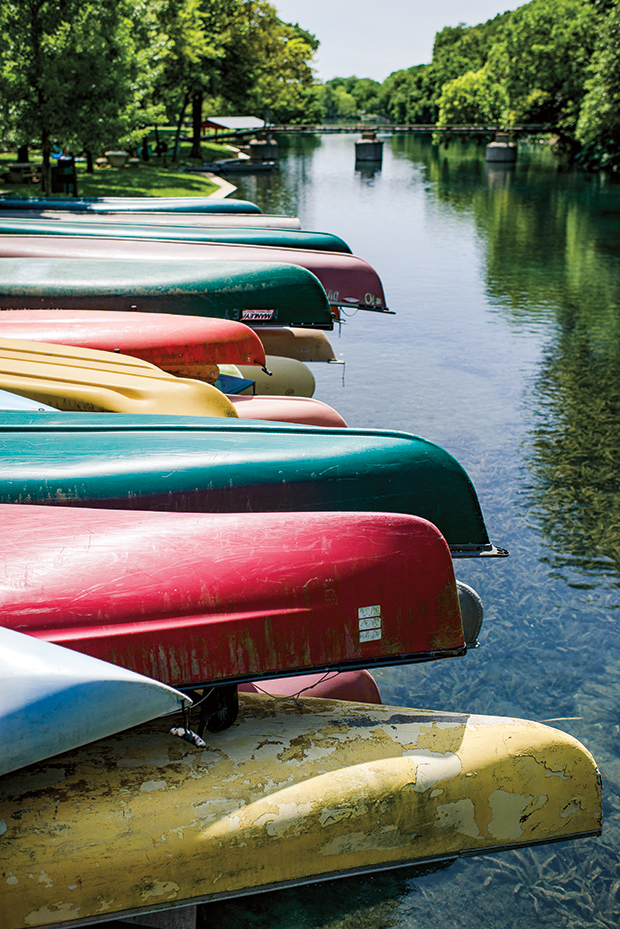 The water of the spring-fed Comal River—the state’s shortest river—appeared shiny blue-green as I walked down to the river at Prince Solms Park in New Braunfels. But standing on the bank, I could see clearly down 10 feet to the bottom, where perch and bass darted among the vegetation.

Three hours into the day, I was already on my third river, and I had bypassed chances to access two others (the Guadalupe and Blanco), saving them for later stops. This was a reoccurring theme: I passed up numerous chances to stop at inviting swimming holes—Guadalupe River State Park, Privilege Creek near Bandera, Williams Creek in Tarpley, and others—as I held to my schedule.

I had no tube to ride Prince Solms Park’s short tube chute, which lies just upstream from the colossal Schlitterbahn Water Park, so I swam a bit and then took a seat at a picnic table under a stout live oak tree. Nearby, children from a summer science camp dipped fishnets in the water, and submerged scuba divers explored the river’s depths, leaving a trail of bubbles percolating on the surface.

“It’s a very relaxing environment down there,” diver Ben Flores of New Braunfels told me, relaying how he’s recovered everything from GoPro cameras to diamond rings, key chains, bikini tops, and even a prosthetic leg from the river’s floor. “I can’t afford to go to Cozumel every day, but I can swim and dive here every day.” 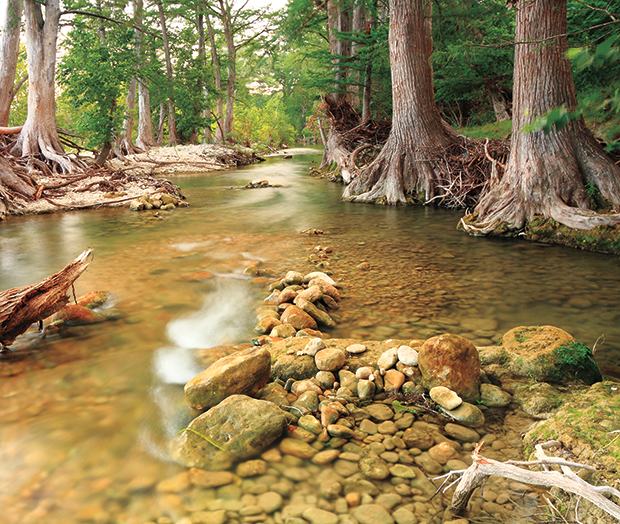 A few bystanders glanced over quizzically as I scrambled around to take pictures of my barbecue sandwich, which I had balanced on a cypress-tree root on the bank of the Medina River. The image turned out pretty well, I thought, capturing the meaty sandwich (from Sid’s Main Street BBQ in Bandera) in the riverside’s sun-dappled light against a background of an emerald river and towering cypress trees.

Apparently I was getting a bit lost in my own thoughts on this fourth stop of my nine-river journey. But I snapped to attention when I jumped into the cool water and semi-swift current of the Medina River at the Ranger Crossing on Texas 16, a few miles west of Bandera.

After drifting downstream in the chest-deep water, I turned and swam against the current, spellbound by the water-level view of the river upstream. The cypress-lined banks enveloped the Medina like the walls of a Spanish Colonial chapel; the pristine river stretched to the horizon where it converged with the pale blue sky. 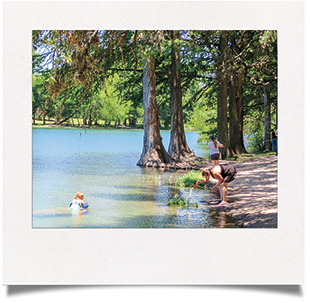 Swimmers play in the Sabinal River at Utopia Park.

The Hill Country terrain buckled into steeper and taller slopes as I drove west across Bandera County to Utopia Park. Here, a dam creates a broad swimming hole on the Sabinal River, which rises upstream near Lost Maples State Natural Area.

I noticed some other visitors fishing, so I grabbed my pole and cast a line as well. As I stood on the grassy bank, I thought back to a recent conversation with Doug Wierman, a hydrologist and fellow with the Meadows Center for Water and the Environment at Texas State University.

Wierman had explained that most of the Hill Country’s rivers surface in the Edwards Plateau region. The rivers give and take from shallow aquifers, and both the rivers and aquifers depend heavily on rainfall.

“What makes these rivers so unique is that the originating waters and springs are very nutrient-deficient—there’s very little nitrogen compounds or phosphorous—and that’s what discourages algae and makes them so nice and clear and pretty,” he said.

The water’s clarity made it possible for me to see several perch ignoring my lure. So I reeled in my line and jumped in the water. 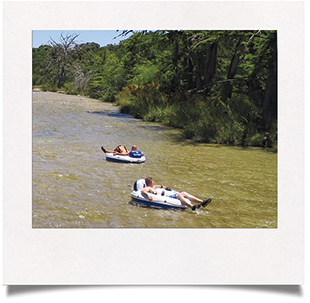 Floating on the Frio River.

“Sorry, the park’s at capacity. We’ve been closed since 1:30,” the Garner State Park gate attendant informed me as I pulled into the entrance at about 2:15 p.m.

Rats. I had been looking forward to renting an inner tube for a short float on the Frio River, as well as an ice cream cone from the park concessions stand. I know that Garner is the state’s busiest park, but it didn’t occur to me that it would be full by early afternoon on a weekday.

So I drove a short distance to a bridge on Ranch Road 1050, where I parked on the roadside and walked a trail down to the river. Here, water about 18 inches deep washes swiftly across a broad, flat
limestone riverbed.

I sat down with my back against the current and watched cliff swallows dart around the bridge as tubers floated by. In the distance, a ridge of green hills undulated across the baby-blue mid-afternoon sky. 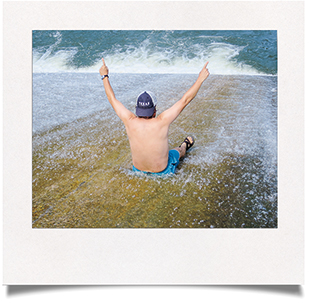 On the Guadalupe River, daredevils slide down the Ingram Dam on foot.

Having reached the westernmost point of my trip, I drove back northeast across Real and Kerr counties to Ingram and the Guadalupe River. The route climbed sharp bluffs carpeted in juniper, crossed big-sky savannas splashed with yellow huisache daisies, and then descended to the forested Guadalupe River valley.

The Guadalupe stretches at least 100 yards wide at the Ingram Dam, which has a sidewalk on top that’s popular for sunbathing. On the upstream side of the dam, swimmers bob in deep water while minnows nibble their toes. On the opposite side, water pours over an angled spillway; algae and the rushing water combine to create a 45-foot slide to the river below.

I hadn’t slid down the Ingram Dam since I was a teenager, but the slide and splash into the river were as thrilling as ever. Climbing back up onto the slippery spillway, however, was harder than I remember.

Back on top of the dam, I was chatting with a local when we saw splashing in the shallows near the bank below the spillway. We looked closer. A water moccasin had its jaws locked on a bird and was thrashing back and forth to subdue it. After about 10 seconds of struggle, the stubby snake pulled the bird’s body into a dark crevice in a pile of boulders lining the bank. Time to move on. 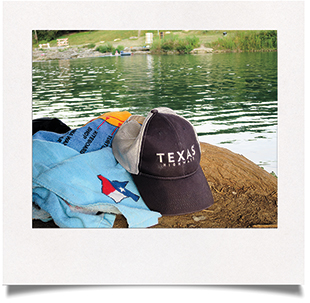 Finding respite along the banks of the Blanco River.

The 70-foot-long picnic table at Blanco State Park offered a relaxing spot to eat the chicken-salad sandwich I had picked up at the Clear River café in Fredericksburg. The Civilian Conservation Corps built the concrete table in 1933, placing it on an oak-shaded bank of the Blanco.

The CCC also built the park’s main swimming area, including a dam and an adjacent swimming pool that’s continually refreshed by water pouring downstream (unless the river is low).

Though it was about 7 p.m. and the sun’s lateral beams cast lanky shadows over the river, tireless children formed a loop as they jumped from the dam into the swimming hole, climbed a ladder back up to the dam, and jumped again—over and over and over.

I wonder if the CCC boys ever could have imagined the generations of Texans their creations would entertain? 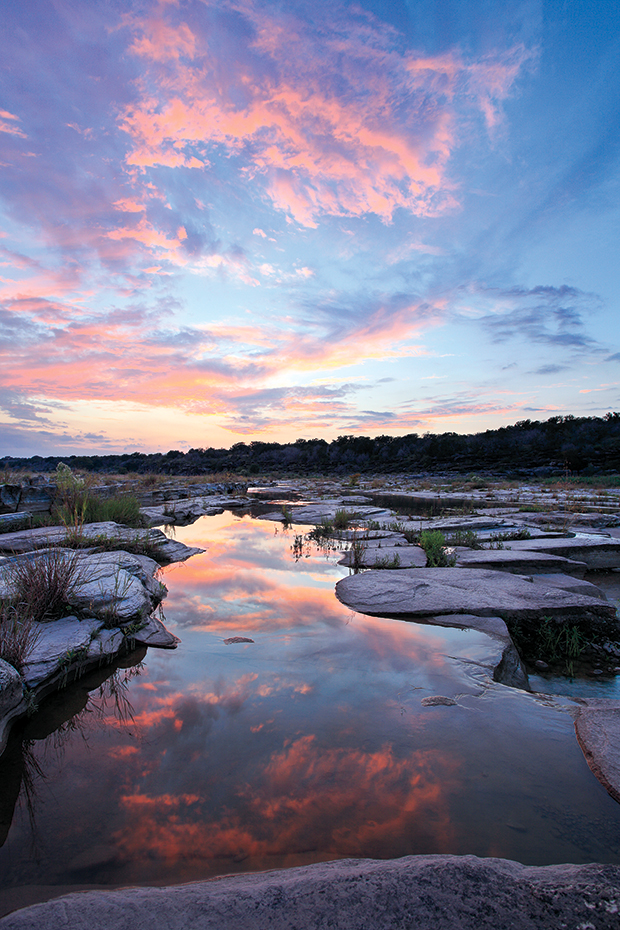 Hiking down the western side of the river valley at Pedernales Falls State Park, I watched the shadow of dusk advance up the opposite hill. The day’s final sheets of light retreated to the ridge top of oak and juniper trees like warriors making a final stand. I made it just in time to jump in the Pedernales before sunset.

Floating on my back, I listened to the rattles and clicks of cicadas and bullfrogs. I turned my eyes skyward as the sun’s final rays grazed puffy cumulus clouds. The clouds looked like marshmallows ignited by a campfire, blazing from white to orange, red, purple, and gray.

By the time I got back home to Austin, I had driven 370 miles over 16 hours, crossing nine rivers (some of them multiple times), and countless creeks.

“What’s the point?” a friend asked me later, suggesting that she would prefer a more leisurely trip than a nine-river day.

Fair question. The point was to bask in the bounty of the Texas Hill Country’s rivers and make the most of the year’s longest day. Next time, maybe I’ll swim in one river a day for nine days, or better yet, spend nine days at each of the nine rivers.

When it comes to swimming in a spring-fed Hill Country river, you really can’t go wrong.