From sewage to avian refuge at Mitchell Lake Audubon Center 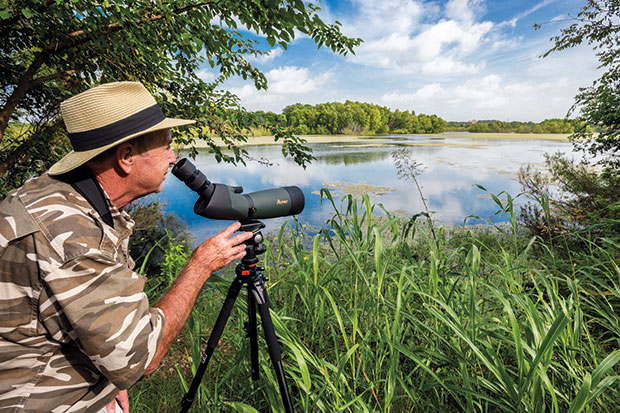 Sara Beesley, director of the Mitchell Lake Audubon Center in San Antonio, thought she might have fallen prey to some strange trick when she first started working at the center two years ago and didn’t see any American white pelicans for a few weeks. “After all,” she explains, “the pelican is our signature bird, and Mitchell Lake is one of the few places in North America where you can see them year-round.”

Beesley’s first weeks were an anomaly, however, and her exploration of the refuge’s lake, mudflats, and shallow wetlands soon coincided with the presence of the white pelicans, characterized by large throat pouches and long beaks. And when Beesley gave me a tour of the 1,200-acre preserve this summer, we saw dozens of the broad-winged birds, as well as neotropic cormorants, black-bellied whistling ducks, scissor-tailed flycatchers, and dickcissels.

“We are right along the central flyway, so we are a perfect stopover as birds migrate through,” Beesley says. “We have a range of unique habitats so we attract all types of birds—we have uplands, ponds, wetlands, and brushlands. We also get lots of coastal birds. Birders come here from all over the world.”

When you visit Mitchell Lake, stop first at the visitor center to register, pay the $5 entry fee, and pick up a loaner pair of binoculars and a map. The center is in the 1910 Leeper House, the former home of the McNay Art Museum’s first director, John Leeper; the building was moved from the museum grounds to Mitchell Lake in 2003. The home’s broad porches with overhead fans offer a relaxing place to gaze at the surrounding xeriscaped gardens and their frequent butterfly and hummingbird visitors, and to study the list of birds that have been spotted at the refuge.

Mitchell Lake Audubon Center offers about two miles of walking trails through its 385 acres of upland habitat—thorny South Texas Brush Country with thickets of oak, mesquite, huisache, and prickly pear. There are also five-and-a-half miles of roads that visitors can drive or hike among the refuge’s 215 acres of wetlands and ponds, and along the shore of the 600-acre lake. Catering to birders, the refuge has a bird blind on its “bird pond” and clears brush in certain areas to create views of the basins and polders.

While there are plenty of birds in the upland habitat, the majority of the action is typically at the lake and the wetlands. The center offers guided birding tours each week (normally on Sundays). A tour this summer recorded 53 species, including a great blue heron, six black-bellied whistling ducks, and eight painted buntings. In the late summer, shorebirds like black-necked stilts, American avocets, sandpipers, herons, and egrets flock to the refuge’s wetlands; in the winter, ducks are the most common sight, including northern shovelers, blue-winged teals, and hooded mergansers.

With its mission to connect people to nature through conservation and education focused on birds and bird habitat, the Mitchell Lake Audubon Center hosts some 4,000 school-children for camps and field trips each year. “Kids don’t spend as much time outside these days and have less opportunity to experience nature,” says Danielle Ormon, a spokeswoman for Audubon Texas. “When kids touch and feel nature, hold it up close, the experience sticks with them and they in turn teach their parents.”

The center also offers opportunities for older children and adults to participate in “citizen science” data collection projects, such as a recent Frog Watch. Participants memorized the sounds of various frog calls and then identified eight separate species in the preserve, from small Blanchard’s cricket frogs to large Gulf Coast toads. This fall, citizen scientists will look for the endangered Texas horned lizard.

Catering to birders, the refuge has a bird blind on its “bird pond” and clears brush in certain areas to create views of the basins and polders.

Formed thousands of years ago through natural drainage, Mitchell Lake has always been a magnet for migratory birds. Native Americans likely camped at the site, and given the lake’s proximity to San Francisco de la Espada Mission (about three miles away), the missionaries probably relied on the lake to water their livestock. Early maps identified the lake as Laguna de los Patos (Lake of the Ducks), and it was a popular site for duck hunting and bird watching in the 19th Century. The lake takes its name from Asa Mitchell, a veteran of the Battle of San Jacinto, who bought the lake and surrounding acreage in 1839.

In the early 20th Century, San Antonio enlarged the lake with a dam and began piping its sewage there, at first untreated sewage, and then after 1930, treated wastewater. While that may sound unpleasant, landfills and sewage treatment plants attract a diversity of winged creatures and are often popular with birders. Regardless, don’t let the site’s distant past dissuade you from a visit today. The Texas Legislature decreed that the lake no longer be used for wastewater treatment in 1972, and the San Antonio City Council declared it a bird refuge in 1973. The National Audubon Society took over management of the site in 2004.

Retired biologist Ruth Lofgren, 98, worked with the League of Women Voters to help resurrect the lake from a sewage swamp into a wildlife center—a transformation she calls a “miracle.” “It’s wonderful for people, especially children, to have an opportunity to get acquainted with nature,” Lofgren says. “I just love seeing a thousand pelicans swoop from one area of the wetlands to another. It provides such a soothing experience in a person’s life.”