Whether your favorite spring feeds a public swimming hole or a clear Hill Country stream, or trickles warm water into the Rio Grande, the reward is worth the journey. 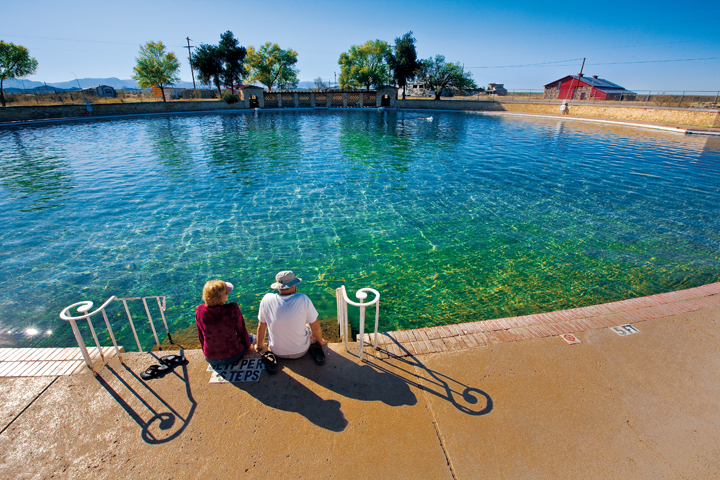 Springs feed the life force for humans (and other living things) throughout Texas, and  have done so ever since … well, ever since there have been humans in Texas. Archeologists point to evidence that shows people were hanging around some of Texas’ largest springs more than 10,000 years ago. That’s a long time, especially in a region historically regarded as too harsh and hellishly hot in the summer to support large numbers of people. At least until air conditioning came along.

Prehistoric human presence at Texas springs is indicated by tangible evidence such as flint Clovis dart points unearthed near San Marcos Springs. For more evidence, consider the extensive rock art adorning the walls of shelters and overhangs throughout the region west of Del Rio defined by the confluence of the Devils and Pecos rivers with the Rio Grande. The more lighthearted modern-day equivalent of those prehistoric clues might be today’s symbols of time spent near springs: inner tubes, fly rods, swimsuits, kayaks, and paddles.

Prehistoric and contemporary evidence both pretty much speak to the same truth: When the heat is on, Texans seek out springs. Springs make the summer worth anticipating and pretty up the landscape by nourishing plants and animals-even during the driest and hottest years. And, just as importantly, springs simply feel good. Immersion in cool, pristine waters forced up to the surface from the depths of an underground aquifer beats air conditioning any day. In my book at least.

Truth be known, springs make their particular pieces of Texas a pleasure any time of the year, because of the way they bring sustenance to vegetation, to wildlife, and to the entire natural world—humans included.

All the springs of Texas together produce 117,000 liters of water per second, according to the late Gunnar Brune, a geologist for the U.S. Soil Conservation Service and the Texas Water Development Board. Brune’s landmark book The Springs of Texas is regarded as the Bible of Texas Springs because it’s the only source of detailed research and information on the subject. Originally published in 1981 as a privately printed labor of love, the book was revised by geologist Helen Besse and published by Texas A&M Press in 2002.

Brune tempered his passion for springs with a prophetic observation in his writing: Numerous springs were failing or had gone dry while the underground aquifers that fed them were being drawn down. Increased human and agricultural use, the spread of impervious cover through development, and a climate trending toward less rainfall were the main culprits.

The considerable number of communities, schools, churches, and other places across Texas with the phrase springs or spring affixed to them, particularly along the 98th Meridian where the rocky limestone hills meet the blackland prairie and coastal plains, attest to the value Texans have placed on springs for many generations. During periods of extreme drought, like the summer of 2009, springs often become a widespread public obsession—a keystone indicator of the state’s need for water.

Then there are those of us who pay tribute by simply jumping in.

My own personal springs odyssey began as a child, first at Burger’s Lake on the far west side of Fort Worth, a public swimming lake whose chilly waters are fed by Roaring Springs. Next, I experienced Aquarena Springs in San Marcos, a water-oriented tourist attraction inspired by Weeki Wachee Springs in Florida. At Aquarena Springs, the star attractions included Ralph the Diving Pig, underwater mermaids, Glurpo the Clown, and a ride over Spring Lake in a glass-bottom boat. I can still remember being fascinated by one springs complex named Cream of Wheat, whose puddles of bubbles vividly illustrated how perfectly its name fit.

As an adult, my girlfriend turned me on to swimming at Barton Springs in Zilker Park, just across the Colorado River (now Lady Bird Lake) from downtown Austin. It took a few weeks to adjust to the instant chill whenever I hit the water, but once I did, I was hooked. Soon, I was swimming a mile a day on all but the coldest days of the year (on those days, the constant-temperature spring water actually felt warm). I proudly wore my Barton Springs T-shirt that bragged the water temperature was 68 degrees year round.

Barton Springs led me to quit cement ponds (traditional swimming pools), swear off chlorine and lap lanes, and search for more springs. On my odyssey, I sought out the wholly charming Krause Springs in Spicewood, visually dazzling Hamilton Pool in western Travis County, Blue Hole and Jacob’s Well in Wimberley, the natural swimming pool fed by Comal Springs in New Braunfels’ Landa Park, and back to San Marcos. At Aquarena, the swimming pigs are gone and the tourist attraction has transformed into Aquarena Center, home of the Texas River Center and the Texas Rivers Systems Institute, both part of Texas State University-San Marcos.

As I continued my quest, I discovered Las Moras Springs, which supply Fort Clark in Brackettville, San Felipe Springs in Del Rio, the spring-charged Devils River (arguably the most pristine waterway in Texas), an unnamed spring that fed a long stretch of the west fork of the Nueces River, and the desert cienega, or springs, known as Independence Creek, south of Sheffield. Further explorations in far West Texas took me to Rio Grande Hot Springs in Big Bend National Park, Chinati Hot Springs, seven miles north of Ruidosa, (which is about 50 miles west of Presidio), Indian Hot Springs south of Sierra Blanca, and San Solomon Springs at Balmorhea State Park.

Of all these spring-fed destinations, Balmorhea remains my favorite swimming place in all of Texas-except for a few secret swimming holes, the locations of which I’ll never reveal.

Springs have inspired my writing over the years, and research into the dynamics of springs (as well as the politics associated with water rights) has led me to better understand these unique environments. While on the quest, I have been privileged to witness artesian springs literally gushing out from the ground from a “honey hole” in Kinney County and (only a few weeks ago) a spring roaring out of a jumble of rocks at the bottom of a limestone cliff on the banks of the Blanco River.

Springs are not limited to the western half of Texas. One of the most unexpected springs I’ve visited are those near Bayview and Port Isabel where General Zachary Taylor’s troops refreshed themselves on their journey to the Mexican War in 1846.

The streams that springs feed draw me in just as strongly as their sources do. I’ve lazed under and around waterfalls on the Devils River, including Dolan Falls, which lies at the juncture of Dolan Creek and the Devils River; at Krause Springs along the Pedernales; in Hamilton Pool; at Gorman Falls, created by spring-fed Gorman Creek near the Colorado River in Colorado Bend State Park; Mexicana Falls in Big Bend Ranch State Park; Cottonwood Falls in Big Bend National Park; and other unnamed (but not unappreciated) falls. I’ve canoed, kayaked, snorkeled, swum, tubed, fished, and soaked in some of the most wonderful water on earth, each and every adventure a Technicolor splash.

I have swum alongside thousands of endangered pupfish and with hundreds of other piscine species, as well as scores of red-eared sliders and Texas spiny softshell turtles. More than a few great blue herons have shared the view with me on other occasions and in other spring-fed settings.

Believe me when I say the view of the undersides of ducks and geese floating on the surface of some of the clearest waters this side of the Caribbean-including the crystalline spring-fed pool at Balmorhea State Park and in Barton Springs- is strange and wonderfully exotic. So, especially, is the sight of scuba divers from across West Texas, New Mexico, western Oklahoma, and Kansas converging around the headwaters of Balmorhea. As the divers navigate the water 20 feet below, I’m skimming along the surface and watching their antics through swim goggles.

Those kinds of experiences have led me to believe that maybe Texas has the best springs on earth.

Turns out there’s more than a little truth to that perception. Texas is blessed with an abundance of springs-more than 2,900 springs in 183 Texas counties had been documented by Gunnar Brune over the course of his life; Helen Besse is researching and recording springs in the 71 other counties of the state, and they’ll be in the next book.

Beginning in the 16th Century, explorers mapped out trails and subsequently trade routes that were linked by springs. When the railroads came to Texas in the 19th Century, springs often played a role in where the tracks were laid; without them, steam locomotives could not quench their prodigious thirst. The second transcontinental railroad, which passed through Houston, San Antonio, and El Paso, included stops near San Pedro Springs, Las Moras Springs, San Felipe Springs, and the artesian springs that once flourished around Van Horn. When US 90 was constructed west of San Antonio in the early 20th Century, it passed near these same springs.

The largest concentration of Texas springs bubbles to the surface in the Hill Country, in a region roughly bounded by Austin, San Antonio, Del Rio, and Junction. Here, the famous 1,100 springs—once touted by commercials for Texas-brewed Pearl Beer—push water up from limestone beds to feed creeks, streams, and the Frio, Llano, Colorado, Pedernales, Nueces, Blanco, Guadalupe, San Marcos, and Medina rivers.

The largest cluster of springs in Texas finds the surface at the base of the Balcones Fault at Comal Springs in Landa Park in New Braunfels. The next largest springs complex emerges at San Marcos Springs, 20 miles north of New Braunfels in San Marcos.

On the banks of Spring Lake, fed by San Marcos Springs, Aquarena Center features an aquarium exhibit that explains the unique freshwater ecosystem of the headwaters here, as well as the importance of aquifers, rivers, and aquatic systems. Nearby, tanks house live specimens of some of the eight endangered or threatened species that depend on the springs for their survival. In Austin’s Zilker Park, in the bathhouse building next to Barton Springs pool, you’ll find an educational exhibit called Splash!, which takes visitors on an underground multimedia and interactive trip into the Edwards Aquifer.

No matter where they are, or whether they have been civilized with dams, stone walls, ladders, or diving boards, or if they are same as they ever were in their wild natural state, springs are destinations of choice for millions of Texans for all the right reasons: to look at, to immerse in, to play around, to appreciate, to savor, and to marvel over. Nowhere but Texas is there water like this.

Last one in is a rotten egg!