The Art (and Fun) of Stacking Rocks

Written by Art Williams, Photographs by Beverly Burmeier | From the February 2017 issue | Updated: February 7, 2017 | Filed Under: made in texasOutdoors 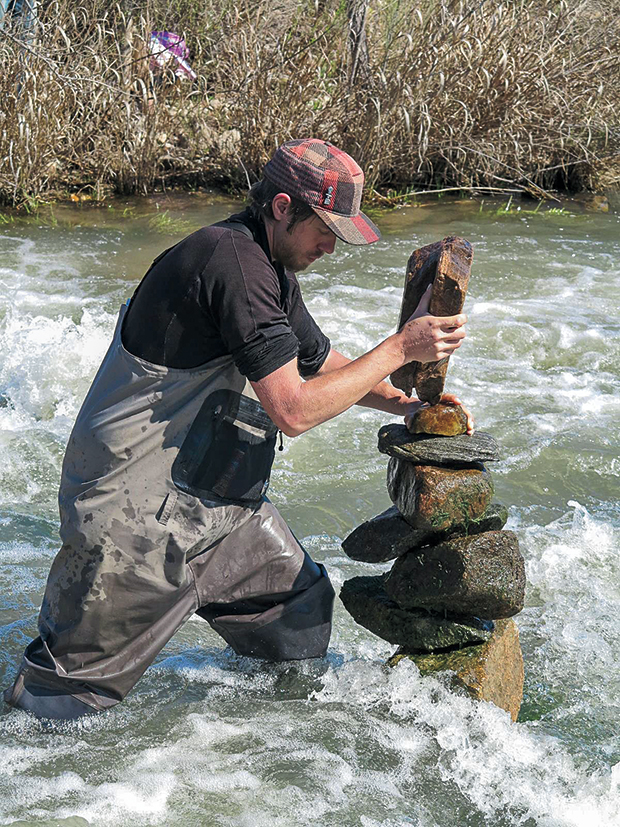 Michael Grab makes a cairn in the Llano River.

Michael Grab wades into the waist-high water of the Llano River in Central Texas, reaches down to the bottom, and fishes out a platter-size rock. Like most large stones, it’s not perfectly round, and its edges undulate in an irregular pattern.

Grab examines the rock, turning it over and over in his practiced hands, noting tiny indentations or notches that could act as a natural tripod for the stack of large and small stones he is building in the shallows. Working while the river’s current flows around his chest-high waders, Grab positions the rock, removes it, tries again at a different angle, and turns it over before dropping it back into the cool water. He’s looking for a rock with a pointed end that can be placed tip-to-tip at the top of his growing stack.

Grab, who recognizes the humorous synchronicity of his name and chosen profession, lives in Boulder, Colorado, where he has been stacking rocks since 2008. As if by magic, he and other rock-stackers balance stones in seemingly impossible formations. No glue, Velcro, wire, or supports of any kind touch the rocks; only gravity holds them in equilibrium.

I’m watching him demonstrate his technique at the Llano Earth Art Fest (LEAF), where rock-stacking demonstrations are some of the most popular activities. For the third year this community-sponsored event, scheduled for March 10-13, features rock-stacking activities for professionals, amateurs, and casual visitors. The goal of all this fun is to bring more awareness to the natural resources of the area, says Llano resident and festival organizer Belinda “Binky” Morgan.

Located in the environmentally sensitive Edwards Plateau, Llano sits on the Llano Uplift, a geologic dome known for its abundance of granite and other igneous rock. Spurred by Morgan, leaders in the community thought that a festival centered around the amen-ities and natural appeal of the Llano River would attract visitors. As I look around at people of all ages delighting in their own rock creations, it appears they were right.

Morgan’s idea for a river- and earthcentered event germinated in 2014 after she saw a picture of a cairn, or a stack of rocks, on social media. “It was one of the most beautiful images I’d ever seen,” she says.

Building cairns is an activity that goes back many centuries, she explains. Far from being extinct, it has become one of man’s newest diversions, requiring a combination of discipline, creativity, and acute awareness of variations in natural objects. 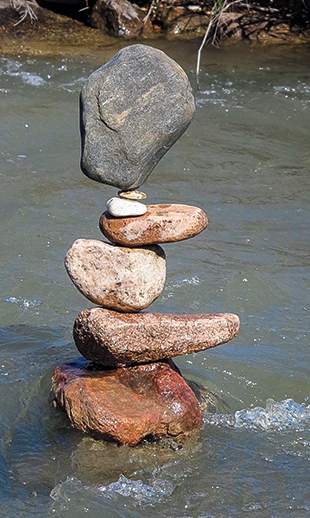 To make the initial festival in 2015 more enticing, organizers created the first National Rock Stacking Championship (now the World Championship). “We decided to just own it,” says Rich Houston, a local real estate agent and one of the organizers of LEAF. So they invited nationally known artists as well as area residents to participate on different levels.

“The response from the first festival blew us away,” Morgan says, noting that volunteers put on the event with support from the city and county. A few hundred people were expected in 2015, yet 5,000 attended. The turnout increased to 8,000 in 2016, with more expected this year. “It brings people into Llano and provides a boost for the economy,” she says.

Rock stacking is at the heart of LEAF. Not only does the event attract nearly a dozen of the country’s most prolific and enthusiastic professional artists who work in this unusual medium, it’s also a venue for local artists to create their own rock arches and towers.

Artists attending this year hail from throughout the United States and as far away as Italy and France. Each of the artists puts his or her unique spin on creating artwork with stones, and crowds gather to watch them balance rocks in delicately precarious formations.

Tim Anderson, a stone balance artist from Pennsylvania, gives popular demonstrations at the fest. Standing in the flowing river, he grabs rocks from the riverbed to stack in incredible structures. Finding the right rock and deciding how to best place it is often a slow process, but I find it fascinating to linger by the river most of the morning.

David Allen builds natural art installations for a living in his Maine studio. At LEAF, his stacked-rock installations beckon me and other visitors to stop and marvel in admiration. His meticulous arches are among the most photographed displays. As I chat with him about his craft, he tells me that he stacks stones every day for both fun and practice.

For Grab, balancing rocks is an intuitive yet meditative experience despite—or perhaps because of—the inherent impermanence of these creations. “You’ve got to know the rocks,” he says. 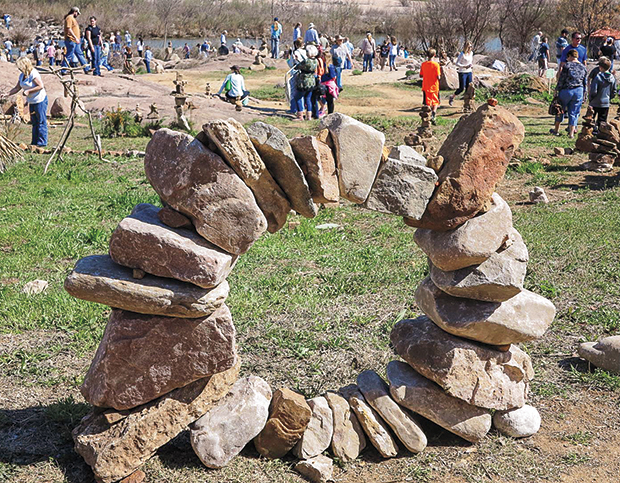 Rock-stacking requires a combination of discipline, creativity, and acute awareness of variations in natural objects.

“The professionals are interested in the artistic aspects of rock stacking and balancing, so we have fun competitions that are open to everyone,” says Houston, organizer of competitions for both pros and amateurs. “All you have to do to train is go outside and start balancing and stacking rocks.”

Soon I wander across the bridge where people are building stacks as high as they can reach. Patience and persistence rule as participants scoop up and replace tumbling rocks during this timed contest.

Large piles of rocks are brought in to supplement those that are found naturally on the land and in the river. Attendees are encouraged to build their own stacks using these randomly scattered stones. And they do.

“We didn’t envision this as a spec-tator fest,” Morgan explains. “We want people to get involved in creating earth art.”

For those visitors who enjoy being spectators, though, LEAF brings in dancers, painters, jugglers, and fire spinners in addition to live music. Workshops on such topics as light pollution, primitive fire starting, plant medicine, and survival training help visitors better understand humans’ connection to nature. Children paint rocks and make boats to float down the river using natural materials like leaves and sticks.

While I marvel at the talent of professional artists, I love watching people of all ages build their own fancy structures from seemingly ordinary objects. Best of all, visitors prove the premise of the festival is correct: Stacking and balancing rocks is a delightful way to engage with nature while creating amazing art from the earth.