Written by Art Williams, Photographs by Larry Ditto | From the May 2017 issue | Updated: October 26, 2018 | Filed Under: OutdoorsThings to Do 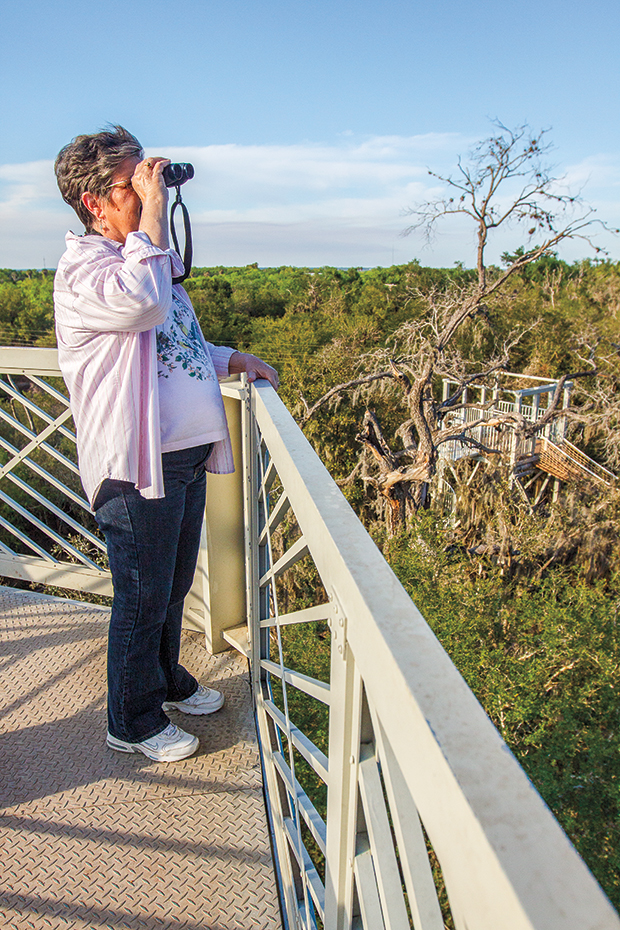 The Alamo Inn B&B specializes in lodging for birders, who flock to the Rio Grande Valley in search of the altamira oriole and other rare species.

My son Byrdie had been anticipating our planned visit to the Alamo Inn B&B for weeks. The two of us have been birding ever since Byrdie, then two years old, pulled down an unused field guide from the bookshelf and asked me to read it to him as a bedtime story. He’s six now, and thanks to him I’ve caught the birding bug, too. Still, for all our countless trips to birding destinations near and far, we’d never stayed at a place designed by and for birders. Adding to Byrdie’s excitement, he had recently decided he wanted to be a travel writer—he’s also wanted to be an ornithologist, a veterinarian, and an astronaut—and he was looking forward to serving as my apprentice.

The Alamo Inn B&B caters to birders visiting the Rio Grande Valley in hopes of catching a glimpse—or better yet, a photo—of rare species like the ringed kingfisher and altamira oriole, which help make the region one of the nation’s premier birding destinations. As a rule, birders aren’t your typical bed-and-breakfast patrons—for one thing, we tend to disappear before the crack of dawn. As we were about to find out, the Alamo Inn isn’t your typical bed-and-breakfast, either.

On the historic Alamo town square—bordered by a shaded plaza with a bandstand—we found the round sign with a picture of a golden-fronted woodpecker that marks the Inn’s entrance. Innkeeper Keith Hackland greeted us warmly. White-haired and soft-spoken, Keith dressed the part of a birder in hiking boots, cargo pants, and a long-sleeved camp shirt. His accent from his native South Africa made me wonder how he ended up in the Valley—a story he’d share later. For now, he led us through the lobby to a literature rack nearly as high as the ceiling. “We offer our guests information as far as birding goes,” Keith said modestly as he assembled a voluminous sheath of brochures, maps, and checklists.

Our arms brimming with birding know-how, Keith showed us up a flight of stairs to the Hummingbird Suite, our home for the night. It was almost as large as our actual home, with two bedrooms, a living room, and a full kitchen. The walls were decorated with hand-painted hummingbird artwork, and twin stained-glass hummingbird lamps lit up the living room. As a writer, I also admired a bookshelf stocked with volumes ranging from literary classics to spy thrillers. “Books change the feel from that of a hotel to something more comfortable,” Keith commented.

I’d purposefully scheduled our visit for a relatively slow weekend, and Keith offered us a tour of the other Valley-themed suites, including the Pancho Villa, the Sea Shore South Padre Island, and the Victorian Edinburgh. Along the way, he recounted the history of the building, which was built in 1919 as the headquarters of the Alamo Land and Sugar Company, just as sugar plantations were starting to clear land near the Rio Grande.

Along with the building’s history, Keith shared details of his own remarkable story. In 1967, he was an exchange student at the Alamo high school, where he fell in love with Audrey Johnson, the daughter of a farming and ranching family. Eventually, he returned to South Africa, and they lost touch. When they reconnected 30 years later and ultimately decided to get married, they moved back to Alamo. While looking for work in the area, Keith helped Audrey set up her medical practice in a rented suite in a historic building on the square. The owner, impressed by the care the couple took in restoring some of the building’s architectural features, offered to sell them the space. After an extensive restoration effort, the couple opened the business in 1999, with Keith as innkeeper and Audrey maintaining her practice next door.

Our tour at an end, Keith graciously bid us good night. Byrdie’s mind quickly turned to a new topic: dinner. Fortunately, along with the birding brochures, Keith had given us a guide to local restaurants. We didn’t have to look far. The first entry, El Dorado Restaurant, was right across the street, and we headed over for a tasty Tex-Mex meal. Byrdie ordered the child’s enchilada plate with fresh-squeezed lemonade, while I opted for a sizzling skillet of pork chops, sausages, and fajitas, served with grilled peppers and freshly made flour tortillas. Stuffed but contented, we returned for stories and an early bedtime since I knew that, like all good birders, Byrdie almost always wakes before dawn.

Sure enough, when I rolled out of bed the next morning Byrdie was already spread out on the floor studying his Sibley Guide to Birds in preparation for the day. We headed down to the self-serve breakfast that’s set up for early-rising birders like us. I helped myself to coffee and prepared toast with strawberry jam to go with hard-boiled eggs from Keith and Audrey’s yard chickens. Then, we were off to the world-famous Santa Ana National Wildlife Refuge, only seven miles away. Byrdie made a beeline for the Canopy Walk, a swinging rope bridge that carries visitors high above the refuge’s towering ebony and ash trees. After a couple of undulating walks back and forth, we stopped in our tracks to watch a majestic Harris’ hawk perch at the apex of one of the ebonies—nearly at eye level.

Back at the Inn after three glorious hours of birding, I perused the Inn’s outdoors store, where guests can arrange birding tours and purchase supplies ranging from binoculars and sun hats to guidebooks and maps. Meanwhile, Byrdie regaled Keith, in whom he had found a kindred spirit, with stories of our morning’s spectacular sightings.

At last, it was time to say goodbye to our generous host. I snapped one last photo of Byrdie and Keith by the Alamo Inn sign, and then led Byrdie reluctantly to the car. Waving goodbye, he brightened as he remembered his new vocation. “I already know what the article should say,” he said proudly. “The Alamo Inn: friendly service, great restaurant recommendations, and the perfect hotel for birders.”