Hike and Bike the Wilds of San Marcos 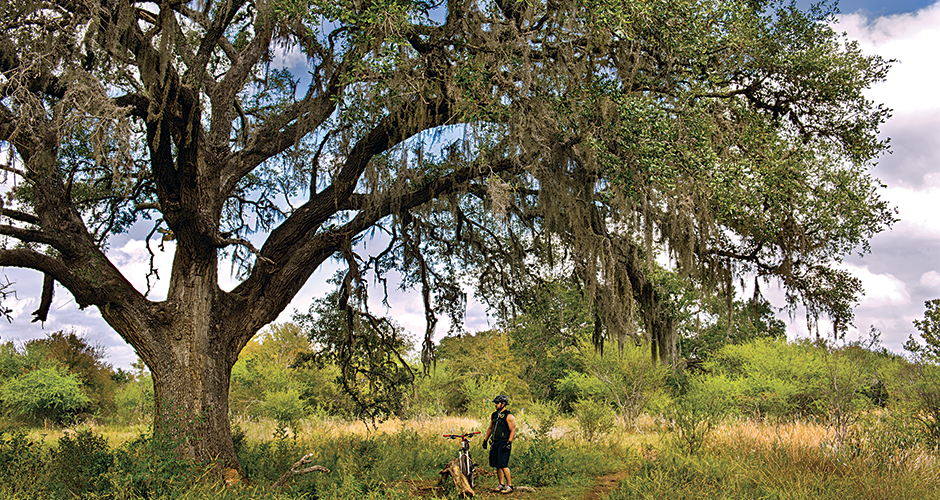 For its size, what small town boasts the most walking paths anywhere in the state, but doesn’t show up in guidebooks about Texas hiking or biking? The answer might surprise you—San Marcos.

Last March, after an hour’s walk under the canopy of 150-year-old oak trees, through stumpy brush and spiky cacti, and across meadows of budding wildflowers, I sat on a cliff’s edge and let my feet dangle over the dry, rocky bed of Purgatory Creek. Nearing the half-way mark of my three-mile hike up Dante’s Trail in the Purgatory Creek Natural Area, I stopped to sip water and to watch birds fly through the canyon. A red-tailed hawk dipped down for prey, and a mockingbird sang in the distance. The staccato hum of insects serenaded me as I relaxed in the cradle of nature … until the cry of a car horn interrupted my reverie.

According to Todd Derkacz, President of the San Marcos Greenbelt Alliance (SMGA), in the past decade the citizens of San Marcos have built and currently maintain more than 17 miles of trails throughout the city. Developed through a partnership between SMGA, the San Marcos River Foundation, and the City of San Marcos, five major greenbelt areas—Purgatory Creek Natural Area, Ringtail Ridge Natural Area, Blanco Shoals, Spring Lake Preserve, and Schulle Canyon Natural Area—draw hikers, mountain bikers, trail runners, and nature-seekers of all ilk.

And so, while San Marcos has long been known for its summertime recreation in the chilly, spring-fed waters of the San Marcos River, the town has now become a not-so-secret destination for birding, hiking, biking, trail running, and geocaching.

Located southwest of downtown off Ranch Road 12 and Craddock Avenue, the 570-acre Purgatory Creek Natural Area offers the city’s longest hiking option with Dante’s Trail, a 4.1-mile route that showcases native grasses, yucca, prickly pear, oak trees, mountain laurels, and in the springtime, bluebonnets. But you don’t have to hike the whole way to witness spectacular vistas: Hike a mile in and turn back; you’ll have a great view of a limestone grotto and several small sinkholes from the Purgatory Canyon Overlook—a 50-foot canyon with its own grotto formed out of limestone. Now mostly dry, Purgatory Creek carved out the ravine over thousands of years. Take a steep side trail just past the overlook to see the rock overhang up close. (Elevation changes on Dante’s Trail are minimal at just under 100 feet, but the trail is still challenging, as it’s rocky in places.)

‘I heard about these trails from a friend of mine. So the next long weekend, I visited San Marcos and hiked Dante. I loved it so much, I started looking for a home to buy. There’s no other place like this in Texas.’

At a quarter of a mile in, I am delighted to find myself at the tremendous live oak known by locals as “Grandma’s Oak.” Many stories tall, the tree impresses me with its girth. The tree’s branches, strung with garlands of Spanish moss, reach across a lush meadow of brush, native grasses, and flowers. Through current conservation efforts by SMGA, the city of San Marcos, and other partners, the area west of Grandma’s Oak has become home to the black-capped vireo, as well as a nesting place for the golden-cheeked warbler. Beneath the tree’s canopy, a fallen limb provides seating. And at the base of the tree, a two-foot-tall stone door protects items to be found by geocache enthusiasts.

While you may find solitude along Dante’s Trail, it’s more likely that you’ll encounter others enjoying the trail; bicyclists and joggers politely call from behind to pass hikers and dog walkers. According to local cyclist Sheila Torres-Blank, parts of Dante’s Trail have “Black Diamond” elements such as narrow widths, steep inclines, obstacles, curves, and—best of all for those who like a challenge—rock “gardens” of stones ranging from grapefruit-size to boulder-size. “The trail is difficult enough to be challenging,” she says, “and a whole lot of fun.”

But not everyone is an expert mountain biker or a weekend hiker. For the nature lover with less intrepid aspirations, San Marcos offers other greenbelt areas and trails. Less than two miles west of downtown, the Ringtail Ridge Natural Area provides shorter walks and the half-mile, wheelchair-accessible Tex’s Trail. Thanks to the hard work of SMGA volunteers like San Marcos resident Maggie Hutchins, Ringtail has been returned to its natural state of ponds, marsh, wildflowers, and brush. “Out here on the trails,” says Maggie, “children can run around, jump, make noise, and be free.”

Ten years after the partnership between SMGA and San Marcos began, word is spreading about the five natural
areas and their trails. A year ago, while I was putting on my hiking shoes at Dan-te’s Trail, I met a gentleman who had recently moved to San Marcos from Plano. He was just finishing his walk. Curious, I asked him why he had moved here.

“I heard about these trails from a friend of mine,” he said. “So the next long weekend, I visited San Marcos and hiked Dante. I loved it so much, I started looking for a home to buy. There’s no other place like this in Texas.”