Volunteer While Seeing the Sights 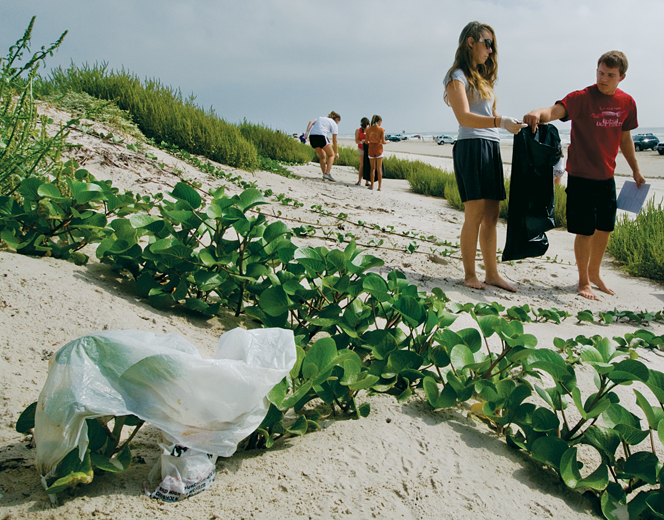 Texas Adopt-A-Beach volunteers (like these in Port Aransas) have picked up more than 7,700 tons of trash from Texas beaches since 1986. (Photo by Michael Amador)

The ferry bumped to a stop at the San José Island dock, and I filed off with 30 or so other passengers. We followed a line of low dunes to the beach, which stretched as far as I could see—all of it littered with plastic jugs and bottles, aluminum cans, buckets, and just about every other imaginable form of detritus. The vast majority of it travels here on currents that enter the Gulf of Mexico, much of it trash from ships originating in far-flung destinations. Our group of volunteers, including 23 science students from Eastfield College in Dallas, sprang into action and, within a few hours, cleaned about a mile-and-a-half of sand. We dragged, carried, and carted many thousands of pounds of trash, enough to fill the 38-foot boat three times. Total haul for the St. Jo and Port Aransas beaches that day: 12,075 pounds of trash.

The shore looked beautiful, the entire afternoon lay before me, and the sun shone on this now nearly spotless stretch of the Texas coast. Beach clean-up, I realized, offered a perfect way to combine volunteering with travel.

Vacations can present excellent opportunities to do good works—you’re likely to have some time on your hands, to be in a place you find worthy of assistance, and the work itself tends to be interesting and unexpected.

According to the Corporation for National and Community Service, more than 3.7 million Americans volunteered more than 120 miles away from home in 2007, and a 2008 MSNBC poll reported that 95 percent of those who volunteered while on vacation indicated they’ll do so again.

What’s more, people who volunteer may benefit almost as much as the people or cause they serve. According to data from a National Institute on Aging study collected from 1986 through 2006, people who do community service enjoy better physical health and suffer less depression. Other research shows that volunteering triggers release of oxytocin and other feel-good brain chemicals, and can also lower the risk of illness, even decades later.

If cleaning beaches sounds like your cup of tea, several organizations spearhead events perfect for families with children of almost any age. The Texas General Land Office Adopt-A-Beach program holds cleanups all along the coast each fall and spring, including the one I joined on St. Jo. The Ocean Conservancy sponsors an annual international cleanup every fall, with a number of locations in Texas, and local coastal communities often organize trash pick-up days.

Opportunities abound in Texas to do good deeds while traveling. Just about anywhere you go, someone needs volunteers for a worthy cause. These examples can help get you started. 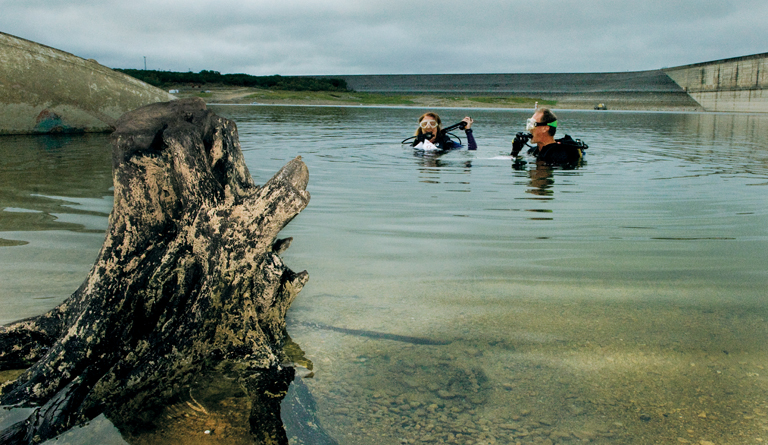 Gnarled oaks, tall palms, waving grasses, and a riot of wildflowers in season cover this refuge on San Antonio Bay north of Corpus Christi. Home to majestic and endangered whooping cranes mid-October through March, the refuge also has alligators, deer, bobcats, wild turkeys, and a variety of shorebirds, including roseate spoonbills. A 40-foot-high whooping-crane observation tower, visitor center, 16-mile driving tour, and seven trails lure travelers from around the continent.

The refuge provides volunteers with RV sites and kitchen, bathroom, and laundry facilities in exchange for working three or four days a week for at least three months (or shorter stints in times of need), says volunteer coordinator Bernice Jackson. These volunteers work in the visitors center, mow, and maintain trails. Jackson also plans day projects for groups (call ahead), and has local volunteers who come in regularly. She says. “We have a real need for people in spring, summer, and fall months.”

Give Back Getaways, Ritz-Carlton, Dallas

Guests at Ritz-Carlton hotels worldwide can volunteer with local organizations chosen by hotel employees through its Give Back Getaways program. Texas ranks high whenit comes to hungry families, and The RitzCarlton, Dallas, picked as its beneficiary the North Texas Food Bank, which provided food for 37 million meals for Texans in 2009. I spent a morning in its bustling kitchen, mixing ingredients for chicken casseroles, some of the 10,000 hot meals prepared weekly here. Participants age 10 and older also can sort and box food in the food bank’s cavernous warehouse, and a full-day experience includes serving after-school meals. Volunteers receive snacks upon arrival at the Ritz-Carlton and a Food Bank T-shirt, but those rewards paled next to the idea that my help meant someone had a meal that day who might not have otherwise.

The swanky Uptown property includes an award-winning spa, a great way to reward yourself for a deed well done.

Grand Hyatt San Antonio offers a volunteer program called Destination Humane. Visit the city’s Humane Society, where you can play with dogs and cats, and post your “vacation” photos on the organization’s adoption website.

Texas state parks rely heavily on volunteers, who provided nearly $7 million worth of labor in 2008. At Palo Duro Canyon State Park, Assistant Park Manager Nathan Londenberg schedules workdays to help maintain the extensive trail network. Volunteers don’t need any specific skills, and there’s work appropriate for teens and adults. The park staff posts a schedule for workdays on signs around the park and on its website.

State park volunteer hosts receive a free campsite in exchange for 24 hours of work each week (36 hours for couples) for at least 30 days. “Their primary task is to maintain the camping loop where they reside,” Londenberg says. ”Hosts serve as the eyes and ears of the park in that loop, too.” Host spots at many parks are hotly contested, and hosts often return year after year.

Nearly all state parks offer both short and long-term volunteer opportunities. Before you go, check with staff to see what kind of help they need. And if your family wants to grab a trash bag and clean up the campground, park staff always welcomes the assistance. They’ll be very appreciative, and you’ll know you helped keep a special place special.

Volunteers work on teams. One team builds and maintains trails and installs signs. A building team helps with construction and renovation of an interpretive center and builds bird blinds, and a nature team coordinates events with schools. Some volunteers, members of the Friends ofinks Dam National Fish Hatchery, lead tours on the trails, says hatchery administrative assistant Cindy Fronk. “We’ll take anyone who is interested, for the long term, a day, or even just a few hours;’ says Fronk, who also welcomes families who want to help out. Volunteers may landscape, clean, or help with office work, and go home knowing they helped keep the property open for visitors.

This annual late-September event mobilizes folks around the country for a variety of one-day projects benefiting our public lands. North of Fort Worth, one location, Lewisville Lake Environmental Learning Area, provides habitat for 270 species of birds, and attracts kayakers, birders, and hikers. Lisa Cole, LLELA’s education coordinator, organizes Public Lands Day volunteers, and welcomes helpers year round for a variety of chores, including moving electric fencing for the resident bison herd.

Volunteer Diane Wetherbee plants trees and prairie species, helps build trails, and leads visitors on hikes through the property’s 2,000 acres of diverse habitat. “I like seeing prairie restoration in a major urban area,” she says. “I feel really good about playing some small part in that. People can see a difference even if they just work a day or two. If you plant something, you might have to come back later to see the results, but what a good excuse to return. It’s fun and relaxing to be outside, and there are rewards that you just can’t quantify.”

Volunteers have the satisfaction of helping preserve this pocket of accessible nature in the midst of a booming metroplex.

In 2009, more than 1,000 volunteers, including 561 divers, collected 4.5 tons of trash. Cleaning up the lake bottom generates a sense of accomplishment, especially since few people have the skills to do it, says frequent participant Warren Roseberry, owner of Tom’s Dive and Swim in Austin. “We’ve been doing it for so long that every year we can see the lake get noticeably cleaner. Plus, people love an excuse to go diving.”

Count my family among them. We snag bits of plastic and floating drink bottles on many a snorkel or dive. Leaving places that we enjoy a bit cleaner than we found them makes us feel good. It also perpetuates the memory of one of our favorite vacation volunteer experiences the time we patrolled for sea turtle nests on a wide, steep Mexican beach. After several hours of walking, we spotted an unmistakable V leading from the water to the dunes and back, with a circle of disturbed sand at the apex. We reported the nest, and a local conservation group moved the 87 eggs it contained to a protected area. Since detritus in the ocean can kill sea turtles, perhaps the trash we pick up these days spares our 87 baby turtles, too.