Where the Birds Are

Black-chins, ruby-throats, painted buntings, and other wildlife delight guests at a B&B south of San Angelo 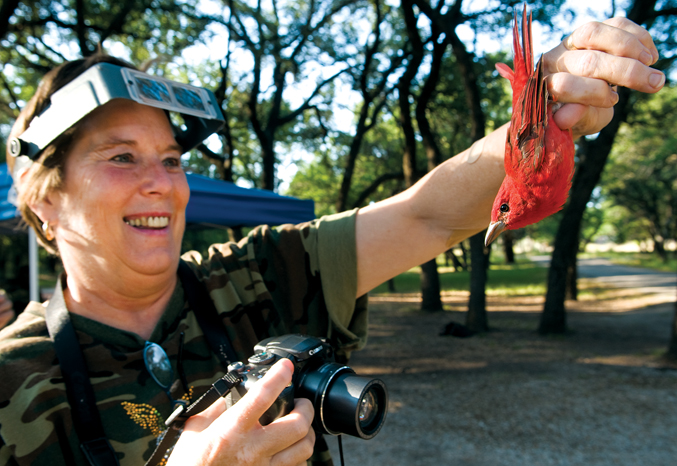 At the Hummer House B&B on the Brown Ranch, near  Christoval, if you snooze, you lose. The main event at this secluded inn with a trio of cozy cottages takes place just after dawn, when scores of hummingbirds begin arriving at seven large feeders hung outside the observation room, just a few feet away from a 30-foot-long wall of windows. So even after a late night talking to owners Dan and Cathy Brown about their 1,200-acre wooded retreat, I wander into the viewing area around 6:45, ready to see the show.

And what a show it is! You don’t have to be a birder to appreciate the antics of these tiny creatures as they maneuver their way around other hummers to a feeder, where they hover in midair and lap sugar-water for a few seconds before flitting away and crowding into a cluster of birds at another station. These rowdy visitors seem to think the “breakfast” in B&B refers to their breakfast, and they’re determined to get their share.

“Try these,” says Dan, handing me a pair of binoculars. The room begins to fill with about a dozen people, all eager to watch the morning spectacle and hear Dan present a lecture on the fascinating behavior of hummingbirds. As I focus on the tiny features of an individual hummer—its bright, dark eyes, long bill, and exquisite, curved toes—I’m entranced. I glimpse one of the birds dart its long, forked tongue in and out of the feeder. “That tongue allows them to scoop up insects, pollen, and nectar from flowers,” explains Dan.

You don’t have to be a birder to appreciate the antics of these tiny creatures.

He points out a male ruby-throated hummingbird, easily identified by its iridescent, red gorget (throat). He then shows me another ruby-throat with a somewhat streaked gorget that he says could be a juvenile male; like the males in most bird species, the juveniles gradually display more color as they mature. Ruby-throats aren’t the only hummers feasting here, though. Dan points out a male rufous hummingbird, with feathers that look like burnished copper, and several black-chinned hummingbirds, the species for which the ranch is most famous.

“See that one over there?” asks Dan, motioning to a hummer with a purple throat and a black chin at one of the feeders. “That’s a male. We have about 3,000 black-chinned hummingbirds on the ranch every summer during the breeding season—April to August—the largest concentration in the state.”

Cathy reminds me that the Hummer House isn’t just about hummingbirds. “We have a lot of birds here—about 135 species. My favorite is the painted bunting,” she says, referring to the particularly colorful songbird. Although it’s native to Texas, it looks like it belongs in the tropics, especially the male, with its blue head and red, green, and yellow body.

“We’ve banded large numbers of both black-chinned hummingbirds and painted buntings at the ranch, most of them netted right around the B&B,” says Angelo State University chemistry professor and licensed bird-bander Ross Dawkins, who leads frequent banding efforts here. The process involves attaching a metal band to a wild bird’s leg, which allows scientists to track the population of a species in a given area.

“Of course, you can spot a variety of birds here, from red-shouldered hawks to moun-tain bluebirds,” adds Dawkins. “And it’s not unusual to see 40 white-tailed deer or more than 100 wild turkeys ga–thered in the backyard.”

Why such an abundance of wildlife? It’s partly because the Hummer House is what Dawkins calls a “mega feeding station.” Last year, the Browns put out 40 tons of corn and three tons of birdseed, and used 1,580 pounds of sugar—more than three-quarters of a ton—to mix up sugar-water for the hummers. “They also provide plenty of nesting material for the female hummers,” says Dawkins.

Indeed, as the light comes up, I can see other types of feeders and structures designed to attract resident birds, plus migrating birds, such as western warblers and cedar waxwings, as the seasons change. An attractive water feature takes center stage- a shallow, 20-by-four-foot, flagstone-lined pool, with an arched metal “bridge” that functions as a perch for avian bathers. Using the binoculars again, I spy 30 to 40 hummingbirds, several painted buntings, and a few lesser goldfinches dipping in the water or luxuriating in gentle sprays from nearby misters. Carolina jasmine, coral honeysuckle, and salvia planted around the pool add further enticement.

Dan tells his audience that even without the feeders and water features, hummers would still frequent the area. “The main reason we have so many hummers is because the ranch borders the spring-fed South Concho River;’ says Dan. “Thousands of pecan and oak trees grow in the river valley. The trees attract aphids and other small insects, which in turn attract hummingbirds, so they flock to the valley.

“We’re also on the eastern end of the black-chinned hummingbird’s range, and on the far-western edge of the ruby throat’s, so the birds overlap,” he says. ”And hummingbirds have phenomenal recall memory, so they come back year after year.”

Picking up a portion of a tree limb with what looks like a knot in the middle, Dan tells the group, “This is a black-chinned hummingbird’s nest.” The tiny nest—about half the size of a walnut shell—looks impossibly small even for a miniscule mother-to-be. “It takes about a week for the mother to build the nest,” adds Dan. “Then she lays two eggs, each one about the size of a Tic Tac. After 14 days, if everything goes OK, the baby birds emerge. The hatchlings grow fast because the mother feeds them a high-protein diet of insects.”

While Dan doesn’t have any formal training in ornithology—he’s actually a geologist and a practicing lapidary—his knowledge of hummers is encyclopedic, gleaned from decades of studying the tiny birds that frequent the ranch. His lecture spans topics from the weight of a black-chinned hummingbird (it takes eight of them to equal an ounce) to the mechanics of a hummingbird nest (the mother uses spider webs—which stretch—to build the nest so it can expand as the chicks grow).

After the lecture, I talk with retired teacher Edna Earle Benton of Mason. She enjoys bringing her daughter Myrtle Bob Keefe and Keefe’s family here when
they visit from California. “It’s such a thrill for the kids to see all the hummers up close and to see so many at one time:’ she says. “My favorites are the ruby throats. My 13-year-old granddaughter Mason, who loves nature, enjoys seeing all the wild turkeys and deer. The ranch is a serene, beautiful place!’

I take this as my cue to head back to my comfortable, native rock-faced cottage, with a swing on the porch and a hummingbird feeder hanging nearby. I
remember that my breakfast also awaits in the fridge—cinnamon rolls and fruit, as well as a slice of Cathy’s homemade coconut cream pie with sky-high meringue to snack on later. (The recipe appears in Cathy’s latest Hummer House cookbook, which she sells in the gift store.) After breakfast, I’ll walk down to the river on one of the hiking trails. But I’m making plans to come back to the observation room later—Dan tells me that the hummers like to tank up on sugar-water again just before dark, and I don’t want to miss the twilight performance.