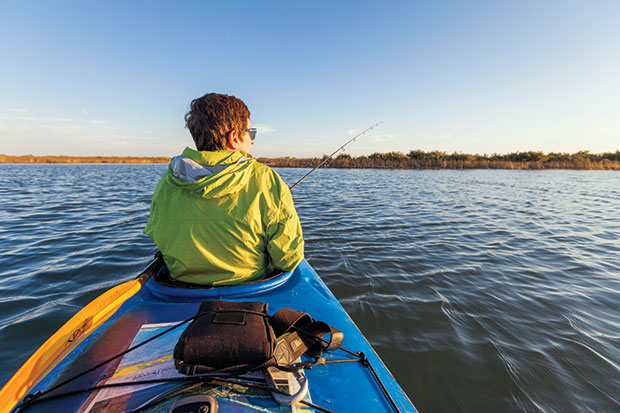 I’m an occasional weekend paddler, launching a canoe or kayak about once a month with my trusty paddling partner and husband John. We’ll go for an hour or so together on Austin’s Lady Bird Lake or the Lower Colorado River.

The Port O’Connor Paddling Trail consists of six trails that together run about 40 miles through Matagorda Bay and Espiritu Santo Bay.

Those gentle paddles are a cakewalk for my über-athletic sweetie, who has conquered multi-day saltwater expeditions and marathon day trips covering 30 miles. I’m not anywhere near that type of athlete. But, I got tired of experiencing his adventures via photos and exhilarating tales.

That’s how we found ourselves recently at The Fishing Center in Port O’Connor, packing up our beat-up, blue tandem kayak for a two-night camping trip to Matagorda Island. One of five narrow barrier islands along the Texas coast, the 38-mile island is protected as the Matagorda Island National Wildlife Refuge and State Natural Area.

Equipped with maps, tide charts, and pre-loaded GPS points—essential tools for a trip like this—we slid into the water late on a Friday afternoon and set off on the 40-mile Port O’Connor Paddling Trail. We quickly shifted into a coordinated paddling rhythm, racing against daylight to make it seven miles to Sunday Beach, our destination for the first night.

Our first challenge was a quick dash across the choppy waters of the Intracoastal Waterway, which provides a navigable coastline route for barges and boats. Once in calmer water, we paddled through bayous of tangled mangroves and around Michelle’s Cut using GPS to follow sign posts on the paddling trail, staying close to shore to avoid the anglers passing by in motorboats.

As if peering into a magical fairy tale, we spied a secluded cove where roseate spoonbills and white ibis pranced through the shallow water on long skinny legs searching for a last-minute meal before dark. A few of the birds took flight, their broad wings catching golden rays of sunlight to create a breathtaking flash.

The sun slid below the horizon as we paddled onto Sunday Beach from the bay side. The entire beach and cove were ours alone for the night. Headlamps on, I prepped dinner while John pitched the tent, careful to avoid crab holes, a tip he’d picked up on a previous trip. “One time, I woke up in the middle of the night to an eerie sound of something hitting the outside of the tent,” he recalled. “I later realized that I’d pitched the tent near a crab hole, and the angry crab was throwing sand onto the side of the tent.”

The north end of Matagorda Island, including Sunday Beach, has no water, toilet facilities, trash cans, or picnic tables. Campers must bring all food and water and pack out their trash.

After dark, the night sky sparkled with constellations and shooting stars. A gentle breeze kept the bugs at bay. I quickly fell into deep sleep with the dim roar of waves hitting the nearby Gulf side of the island, grateful for the soft sand beneath my sleeping pad.

Saturday morning, we walked about a quarter of a mile on a path cut through the dunes to the Gulf of Mexico beach. Shells glimmered on the sand as far as we could see, not another human in sight. Undulating lines of brown pelicans skimmed the water’s surf, looking for their next meal.

We packed up our gear and headed across the bay to a deep inlet called the Fish Pond, a fishing spot recommended by Donnie Klesel at Port O’Connor Rod & Gun. I was dreaming of landing a big redfish for dinner, but I had to be content with a few nibbles on my line. In the narrow inlets, silvery fish jumped all around us, tormenting me. One fish even jumped up and hit John smack-dab on his torso, eliciting a loud exclamation and then a chuckle.

For the next few hours and six miles, we paddled peacefully among the mangrove tangles, accompanied by shy water birds like an American oystercatcher with its long red beak. Occasionally, we encountered muddy shallows that forced us to get out and pull the boat—an unexpected challenge that was inconsistent with the tide forecast. (A local scientist later told us that the shallow conditions were possibly a result of high northern winds.)

Bottlenose dolphins followed alongside the kayak as we neared our campground for the second night, a developed section of the island that was formerly an Army base and state park campground. Closed buildings and crumbling infrastructure gave the area a slightly post-apocalyptic feel. But the covered picnic tables were handy, even if the bathrooms and showers were closed this time of year, and we angled our tent away from the concrete and rusting metal toward a magnificent western view of the island and a small bay.

Somehow John convinced me to take the seven-mile, round-trip hike across the island’s flat, scrubby grassland to see the 1852 cast-iron lighthouse that once served as a beacon providing safe passage to the port of Indianola through Pass Cavallo, which links the Gulf of Mexico and Matagorda Bay. We marveled at the behemoth of a structure, imagining the lonely lives of past lighthouse caretakers.

The next morning was sunny and calm as we loaded up the boat to head back to Port O’Connor. We decided on a direct 2.7-mile, open-water crossing to avoid the previous day’s shallows. The weather quickly turned into rolling gray clouds and a steady wind.

As waves slapped against the boat’s bow, I thought of French explorer La Salle and his ship La Belle, which sank nearby more than 300 years ago. I was grateful when we reached calmer waters protected by mangroves and marshes. At midday, we landed at Port O’Connor after paddling 23 miles in two days. I was now the owner of my own paddling adventure experience. Mission accomplished!