The Sweet Payoff at Journey’s End 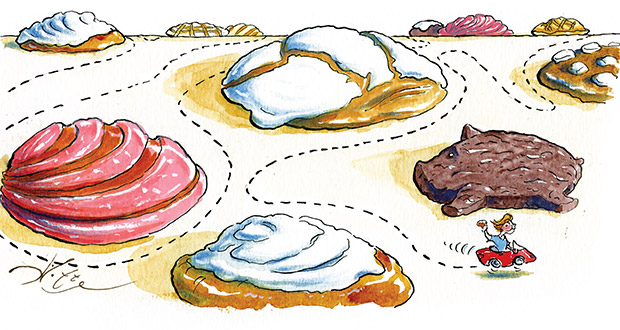 Not all road trips are equal. That is especially true from a child’s perspective. A day’s drive to an amusement park is delightful in theory, but the reality involves hours and hours of confinement before the pay-off.

When I was a child, my younger brother and I were loaded into the family car at least once a year for an eight-hour endurance trip to Nuevo Laredo. It was a journey punctuated by backseat brawls and front-seat threats. When a battle squeal shocked my father into hitting the brakes once too often, my mother would issue the ultimatum: one more peep and no pan dulce. It was a demand for the Quiet Game, and it was used on every car trip with different rewards to varying degrees of success. On this trip, interminable hours of visiting elderly relatives just miles away, the promise of Mexican sugar buns kept my brother and me from killing each other.

Before I was born, grandfather Rodríguez had opened a bakery. A visionary, he had no interest in owning a panadería; his bakery eschewed the traditional larded sweet breads and tarts of the Mexican bakeries in favor of twisted baguettes and French pastries. And yet, the first stop we made once we crossed the international bridge was never Pop’s, but rather our favorite panadería, a sunny tiled cube where a portrait of Queen Elizabeth inexplicably graced one white wall. My father, his tastes jaded by a childhood’s copious consumption of crème horns, would shake his head as we worked tubby fingers across the glass-fronted cases dibs-ing out a smeary trail.

Thick egg-yellow braids and buns, crusty with sugar or oozing with jam, were as uniformly sweet and generic in texture as brands of bubblegum. But the marranitos, plump pigs gorged with ginger and anise, were heads and tails above the others. Empanadas, cinnamon-brown turnovers plump with pineapple or sweet potato, ran a close second. Not that we ever limited ourselves to the pan dulce we favored for eating. Serious dibs-ing was based on color, shape, and grandness, until a sack weighty as a sandbag was hefted to us from behind the counter.

When my grandmother died, the trips to Laredo ended. Ten years passed before I rediscovered those sugared breads. In San Antonio to meet a friend from The New York Times who was interested in exploring all that was Mexican in the city, I suggested we eat at Mi Tierra, a restaurant recommended for its chiles rellenos and year-round Christmas decorations. The warm smells of baking filled the parking lot—vanilla and cinnamon wafted past first, but it was with a whiff of anise that I was transported back to childhood gluttony. Lining an entire wall of the waiting room was a glass case brimming with pan dulce, and overrunning the bottom tray were my dream pigs.

“What is all this?” my friend whispered reverently, glassy-eyed in face of so much glistening sugar. I told him. He asked me to repeat myself, then cleared his throat and swaggered to the counter. I’ll have some pann doolsay,” he said confidently, as if ordering cookware. The dark-eyed teenager looked him up and down, then focused on his bow tie. “What kind?” she said flatly. Lacking any further vocabulary when it came to selections I favored, I joined him in dibs-ing.

It was in the Yucatán jungle when I first realized that like marranitos and empanadas, each twisted, puffed, and shiny piece of pan dulce was distinctive. In a village clearing at the foot of a crumbling pyramid, I entered a cement block tienda. A sweet voiced baker smiled at my stammering delight and taught me to distinguish between conchas, spongy round buns embossed with “shell” patterns, and volcanes, “volcanoes” of cake exploding with cinnamon crumbles.

I began visiting panaderías to increase my vocabulary (ahem). The classic Mexican bakery is organized like a library, a walk-in maze of pan dulce-stocked shelves. Metal trays and tongs are issued at the door for dibs-ing. The selection is often overwhelming, but the essence of all pan dulce is sugar and shortening—and the baker’s imagination.

In Texas, most Mexican bakeries offer a limited variety of high-demand items. Any panadería worth its anise bakes conchas and marranitos. In addition to the familiar pan de huevo (“egg bread”), masterful bakers produce pan finos, delicate puff pastries like campechanas (“hammocks”) and besos (“kisses” of strawberry jam between flaky layers). Others fill their cases with dozens of different pastries, from the devil’s food chamucos (“scorched” cakes) to alamares, a twisted pan fino named for the loop and button closures known as “frogs”.

Wherever I roam, I cannot pass a panadería without stopping in. Always I buy a marranito to later dunk in a cup of coffee—my salute to family road trips.