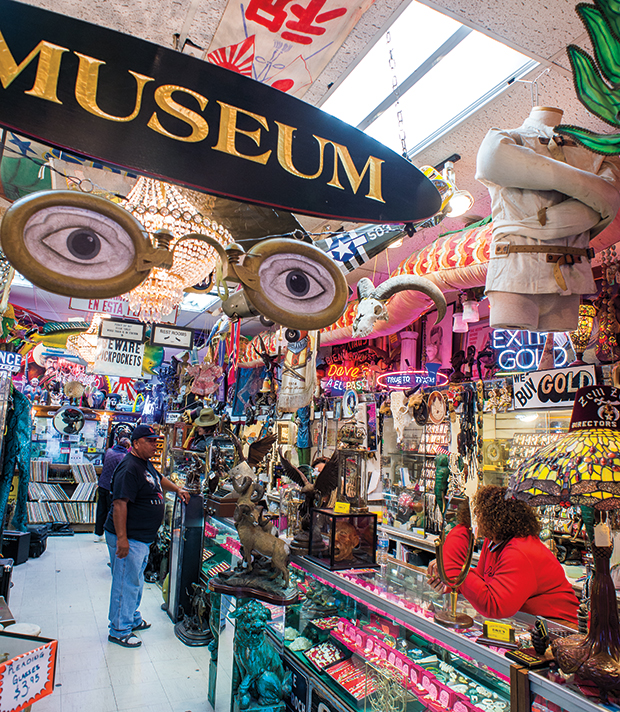 Everyone loves a good story, particularly when it involves Pancho Villa, gunslingers, and border crossings. Such is the legend-soaked history of South El Paso Street in El Paso. Here, Pancho Villa once entertained admirers at the long-gone Roma Hotel, sharpshooters like the lawman Dallas Stoudenmire once gunned down four bad guys in five seconds, and jumbo speakers now pump Mexican hip-hop and Norteño tunes from the many stores serving shoppers up from Mexico for the day.

Dating to the 1800s, South El Paso is the oldest street in town, as well as the main thoroughfare linking downtown El Paso to the Paso del Norte International Bridge, the great concrete arc that shuttles thousands of people and cars between the United States and Mexico each day. Although the sunbaked adobe dwellings and loose cattle that once populated this dusty street have long been replaced by pavement and 21st-Century five-and-dimes, it is still the first strip many folks see upon entering the United States for the first time.

No legend on South El Paso is quite as weird as that of Pancho Villa’s amputated trigger finger. Years ago, I’d heard about a pawnshop that claimed to own Villa’s dismembered forefinger, priced at $9,500—Dave’s Casa de Empeños. When I road-tripped to El Paso recently to meet my friend Luis, a fellow traveler with his own lively tales of crossing borders, it seemed only appropriate that we seek out the alleged trigger finger.

Our quest is easy enough: As soon as we hit South El Paso Street, a 10-minute walk from our hip rooms at the Hotel Indigo, we see Dave’s. With its neon red signs in both English and Spanish and a life-size singing Elvis statue out front, it’s hard to miss. Dave’s pawnshop, it turns out, is housed in the 1882 Montgomery Building; it is El Paso’s only surviving false-front building, an architectural style emblematic of the Old West.

Luis immediately spots the finger in the window—gnarled and gray in a hammered bronze box next to shelves crammed with jewelry, its longish fingernail still intact. A typed message in a wood frame next to it explains that this is indeed the forefinger of a “notorious bandit” and “ruthless killer” who was also considered a local hero. That’s a lot of human paradox wrapped up into one little crooked finger in an El Paso pawnshop.

But is this really Pancho Villa’s? A guayabera-wearing gentleman just inside the door looks like the person to ask; he is speaking in a serious tone to other shoppers, telling them things like where to trade in their gold for cash at the back of the store. This is Rey, the soft-spoken gatekeeper to Dave’s. He says he’s been working there for 56 years, which seems almost as incredible as the idea that this is Pancho Villa’s finger. And when I ask him if it really is his finger, he says with no hesitation, “Claro que si.” We detect neither a twinkle of mischief or mirth in his eye.

Hmmm. We ask about certificates of provenance; Rey says there are none, just the faded message in the wood frame. Uncertain about how to push the question further, we check out a few of the other offerings at Dave’s—a purple alligator-skin coat, a stuffed chupacabra, and a baby vampire heart. (These last two oddities Rey also insists are real, but we remain appropriately skeptical.) This is no average pawnshop, but rather a paean to the fantastical. After marveling at these wonders for as long as we can take it, we break out into the sunlight in search of something a bit less macabre.

Like a guitar. Luis, who is now resuming his life in the United States after a long stint in Vancouver, seeks that one familiar love to help him adjust to a new life back in Texas—a guitar to strum. And South El Paso Street, with its jumble of pawnshops and textile stores, is sure to have an inexpensive guitar in the mix.

Back on the street, we realize that just five blocks stand between us and the bridge to Mexico, and they’re now thick with Saturday shoppers, families strolling with ice cream, and street vendors hawking Mexican churros and helotes con mayonesa. A plump lady beckons outside of her home-goods store calling, “Pásale, pásale, tenemos cubrecamas!” (Come in, come in, we have bedspreads!”) South El Paso Street percolates with the buzz of a border zone—elements from both sides fuse vibrantly into a peculiar in-between identity.

We step into a nearby pawnshop called The Happy Store, which is a cheerful contrast to Dave’s. It is a feast of brightly colored religious iconography—candles, statues of Jesus, nativity scenes—plus random items like Bluetooth speakers and reading glasses. But no guitar; for that, the chatty kid behind the counter directs us to yet another pawnshop on the corner. And when I ask him if he believes that it’s really Pancho Villa’s trigger finger at Dave’s, he says, “Definitely. They have a certificate from Stanford. That’s why it costs $20,000.” Like most good yarns, the tale of Pancho Villa’s trigger finger varies depending on whom you ask.

Fred Morales, an El Paso historian who has written 33 books on the city and hosts walking tours of South El Paso Street, chortles when I call to ask him if the finger at Dave’s was really Pancho Villa’s. “No,” he says. “I’m not into folklore and legends; I’m into real history.” But, Morales says, this street was Pancho Villa’s favorite. After he escaped jail in Mexico City on Christmas Day of 1912, Villa fled to El Paso and took up residence at the Roma Hotel on South El Paso. “He used to hang right next door at some bowling lanes and a restaurant called the Emporium,” says Morales. “He didn’t drink beer or smoke; he just drank strawberry pop.”

Morales also confirms that Pancho Villa was well-regarded in El Paso. “People would come to see him, hundreds of people. He was very charis-matic, and always fighting for the poor,” he says.

The next pawnshop is our home-run; it is fat with musical gear ranging from used microphones to electric amplifiers and ukuleles. While a young clerk with a diamond earring shows Luis guitars, we ask him about Pancho Villa’s trigger finger. This clerk is indifferent as to whose finger it is. Clearly, not everyone is as captivated by the legends as we are. Luis purchases an acoustic guitar and we happily tote it back up the street for one last look at that finger.

Now we are emboldened. We want to know, will Rey sell us this relic if we ask to buy it? But he has disappeared, so Luis asks the woman behind the gold counter, “Hey, how much do you want for the trigger finger?” She nods gravely and disappears into the back of the store. After about five minutes, she returns to report that it’s not for sale anymore. This is one legend that the owners of Dave’s Casa de Empeños want to keep for themselves.

But we do have a guitar. Myth-making comes in many forms, and one of the most reliable ways is to weave a story into song. Perhaps, with some effort and a little songwriting talent, we’ll turn our own adventures into legends worth passing on.