The Soul of Houston in Hermann Park 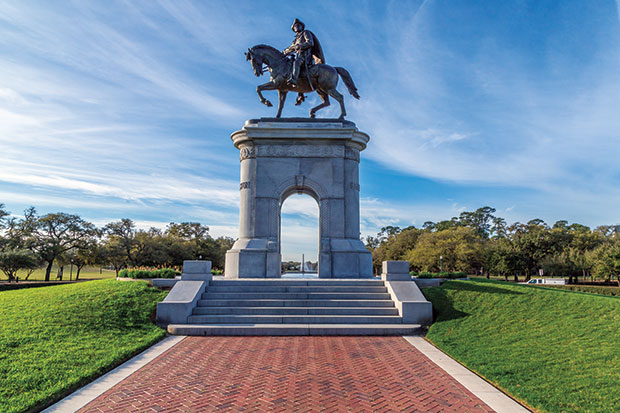 The bronze Sam Houston Monument, created in 1925, stands at the head of a reflecting pool at the park’s main entrance. You’ll encounter another water feature at the main entrance to Centennial Gardens.

Making my case for Houston as an outdoors destination comes with its challenges. Though many people think of the city as a concrete metropolis, those intimate with the southeast corner of Texas understand how verdant our nation’s fourth-largest city is, and how effortlessly and generously the nearby forests spill their natural beauty into this urban center.

Discover many worthwhile diversions all within walking distance of Hermann Park.

Hermann Park is bordered roughly by Cambridge St., Main St., and Hermann Dr., a three-mile drive southwest of downtown. To reach the visitor hotline at the Hermann Park Conservancy, which includes details about the train, pedal boats, and Centennial Gardens hours, call 713/526-2183.

For general information about visiting Houston, including details on lodging, restaurants, and museums near Hermann Park and throughout the city, contact the Greater Houston Convention and Visitors Bureau, 713/437-5200.

Houston easily tempers objections over its humidity and its industrial sprawl with presentations of its natural side.

Houston makes a believer even of a North Texan like me. I figure out quickly to exit the freeway—and stay off. Then, seeing the faithful joggers and walkers along winding waterside pathways in Memorial Park, I begin to get it. Watching people of all ages at play in downtown’s Discovery Green adds persuasion, as does admiring the bicycle traffic alongside the dramatically upgraded and immensely scenic Buffalo Bayou, a 53-mile waterway that empties into the Gulf of Mexico via the Port of Houston and Galveston Bay.

Spending time in Hermann Park, a green space that sprawls across 445 acres between downtown and the Texas Medical Center, completes my conversion. Some of the beauty shows up as obvious and focused, while other aspects grow on me with subtlety. And I discover that while much of the appeal of Hermann Park has been honed through its century-long existence, some of its temptations have only just arrived as part of its grand centennial celebration late last year.

Walking into the recently unveiled McGovern Centennial Gardens, a 15-acre spread on the northeast side of the park near the Houston Museum of Natural Science, I’m captivated by the shiny surfaces of the glass and metal pavilion that opens onto the Centennial Green, an expanse where picnickers convene when the weather’s nice. From the pavilion, named for philanthropist and donor Cherie Flores and designed by renowned American architect Peter Bohlin, I gaze across jumping jets of water in a fountain pool to a 30-foot-high landscaped mound called the Mount, accessible by a winding ribbon of walkway. My breath catches here in much the same way as when I’m just a short distance west, near the formal entrance to Hermann Park, my back to the grand Sam Houston monument installed in 1925, looking down a long reflection pool to the striking Pioneer Memorial Obelisk, a landmark since 1936.

Its majesty is captured in awe-inspiring moments. Whenever I wander through the park, I find stop-motion snapshots that linger long after I’m home again. Among the various sites that inspire me to pause and appreciate the blend of man’s and nature’s talents: The Houston Zoo, with playful bronzes rising from the sparkling waters of a limestone pool shaded by century-old live oaks; the rolling Hermann Park Golf Course, with its Mediterranean-style, 1930s clubhouse framed by mature palm trees; and the nearly 25-year-old Japanese Gardens, a place of serenity with waterfalls and stone and carefully manicured blooms. 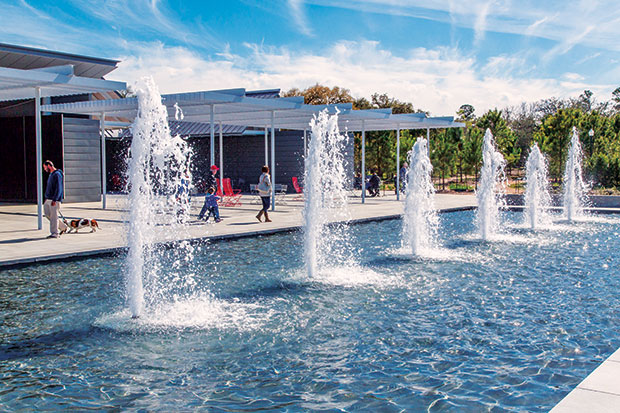 On this most recent visit, however, I’m most drawn to the elegance emanating from the new McGovern Centennial Gardens. This $31 million project was the dream of the Hermann Park Conservancy, a partnership between private supporters and the city’s parks department.

I thank my lucky stars I’m able to explore the place with Director of Horticulture Jane Curtis as my guide. Just before we enter the gardens through the Cherie Flores Garden Pavilion, Jane points to an especially massive live oak—one of about 8,000 live oaks in Hermann Park. Its former position alongside an old carriage path would have blocked a new approach to the gardens, so the tree was carefully relocated 240 feet away.

Jane tells me that the completed gardens project exceeded all her imaginings. She points to the bubbling fountains in the reflecting pool in front of the pavilion; the water dances eye-level to delighted toddlers holding parents’ hands. “Little moments at the gardens affect me,” she confides. “When I first walk in and hear the rush of water, that’s immediately soothing. The whole audio facet surprises me. I knew what to expect with the light and color, but the sound effects are such a bonus.”

“We made sure plenty of things will always be in bloom—camellias in winter; narcissus, daffodil, grape hyacinth in February; and roses will bloom from late spring all the way to December.”

The actual work took nearly 18 months, often with 300 workers on the scene, and included planting more than 490 trees in more than 50 species, along with 760 hedges, 350 rose bushes, 115 camellias, and 650 azaleas, plus well more than 100,000 additional shrubs and perennials in nearly 200 varieties. The idea, Jane notes, is to fill the gardens and the observer’s eye with yearlong color.

“The grand expression of the place is one thing, and then there are the gardens, one after another, each a room unto itself,” she says. “The scale of the gardens is not apparent from the street. The richness of the horticulture, when the flowers explode by late spring, will be amazing,” Jane says. “We made sure plenty of things will always be in bloom—camellias in winter; narcissus, daffodil, grape hyacinth in February; and roses will bloom from late spring all the way to December.”

She takes me to “her baby,” the Family Garden, one of a series of garden rooms lining the northeastern perimeter of the park. Giant wooden planters of vegetables, herbs, citrus trees, fig trees, and blackberry bushes will be tended by local family groups. Wandering through one garden to the next, we wind up on the Sculpture Walk, a repository for many of the bronze gifts bequeathed to the city of Houston. One is a bust of Cuban hero Jose Marti, who died fighting for independence from Spain, a gift from the Cuban community in Houston; another is that of Scottish poet Robert Burns, a gift from the Heather and Thistle Society of Houston.

From there, we ascend the Mount, certainly the focal point of the Centennial Gardens, a site Jane rightfully calls “a magnetic force.” A walking path circles to the top, giving us a spectacular panorama of the gardens splaying out toward the heart of Hermann Park. “From any perspective, it’s impressive,” she says, “most especially when I see hundreds of people going up and down the spiral walk, all at once.”

As we continue along the western side of the new gardens, we come upon statuary of some of the world’s great philosophers. There’s Martin Luther King Jr., Mahatma Gandhi, and, finally, Confucius, figures noted for teachings in peace, justice, and kindness. How lovely, I think, to find them in such suitable surroundings.

“When I come around the corner of a garden and see someone who’s dropped off to sleep while sitting on a bench, I know we’ve done our job. We’ve created a place where people love to relax,” she says. “And on any given day, I will see a patient from a hospital next door to the park, in his or her robe, with a nurse, walking in a garden. That moves me.” 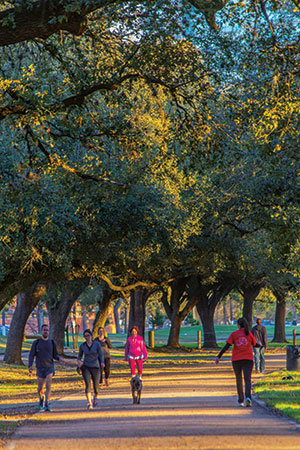 Though I’d be happy to squander all my time reveling in these new jewels, I tear myself away from Centennial Gardens. Visiting Hermann Park, I can’t resist the chance to be a kid again, and I make my way to Lake Plaza, adjacent to the main entrance of the Houston Zoo, where I board the Hermann Park Railroad for a two-mile, winding journey through the park. (Here too are pedal-boat rentals, a restaurant called the Pinewood Café, and the Hermann Park Conservancy Gift Shop.)

During the 20-minute ride, I can see Miller Outdoor Theatre, home to concerts and plays; and catch sight of the tranquil Japanese Garden, which symbolizes the friendship between Japan and the United States. I delight in the creations newly delivered by the park’s Centennial Art Project, Art in the Park. Among several I love, the wildly colorful train tunnel mural, Destination Mound Town, by Houston artist Trenton Doyle Hancock, reminds me of artwork by graphic illustrator Peter Max. I’m fascinated also with Boogie Woogie, a woven maze of locally gathered saplings by Patrick Dougherty, a North Carolina artist who brought this swirling construction to life thanks to help from 150 local volunteers.

Everywhere I cast my eyes, the genius of nature and man unfolds. Above me, the clear, deep blue sky spreads wide its arms as though to embrace this lush artistry. It’s a beautiful day in Houston, and I’m privileged to spend it outdoors.