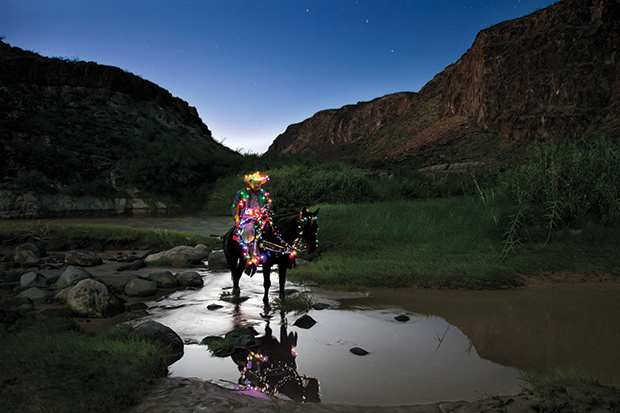 In planning the holiday-themed photo feature that appears in the December 2016 issue, Texas Highways Photography Editor Brandon Jakobeit challenged some of our most creative photographers to interpret the season’s spirit with landscapes and lights.

E. Dan conjured up an image from his childhood as he developed the dramatic Big Bend shot shown above. “I was originally thinking about photographing hikers or backpackers. But then I remembered a poster I’d seen as a kid for the movie The Electric Horseman; Robert Redford’s character rides a horse down the Las Vegas strip. So I tried to re-create that with Christmas lights.”

Photographer E. Dan Klepper, based in Marathon, drew inspiration from the 1979 movie The Electric Horseman, draping a buddy in solar- and battery-operated lights as he rode his horse in shallow waters near Big Bend National Park’s Cattail Falls trailhead. In contrast to E. Dan’s mountainous landscape, Dallas photographer Sean Fitzgerald headed to the Rita Blanca National Grasslands in the Panhandle, capturing a moody, star-dusted shot where the Milky Way, a lone windmill, and an illuminated stock tank on the plains suggest a visual connection between earth and sky. And Kenny Braun of Austin headed to the beach at Port Aransas, juxtaposing a trio of gleaming starfish with the foamy surf at sunrise.

Woodlands photographer Kathy Adams Clark trekked to downtown Houston for a dramatic shot that combined the city skyline with a brilliant Christmas tree, while Laurence Parent of Wimberley re-interpreted the concept of a glittering tree by wrapping lights around the branches of a dying oak atop Enchanted Rock.

Austin photographer Matthew Johnson also seized upon the tree theme, venturing to a family-run tree farm near Magnolia to create a nostalgic image suggesting hard work with a joyful payoff. “The barn itself dates to the 1920s,” says Matthew.
“I was going for a photo that could have been taken yesterday, or decades ago.”

It’s easy to lose track of time when contemplating these unusual images.

In downtown Houston during the holidays, decorations around City Hall and the Hermann Square reflecting pool create a festive atmosphere. 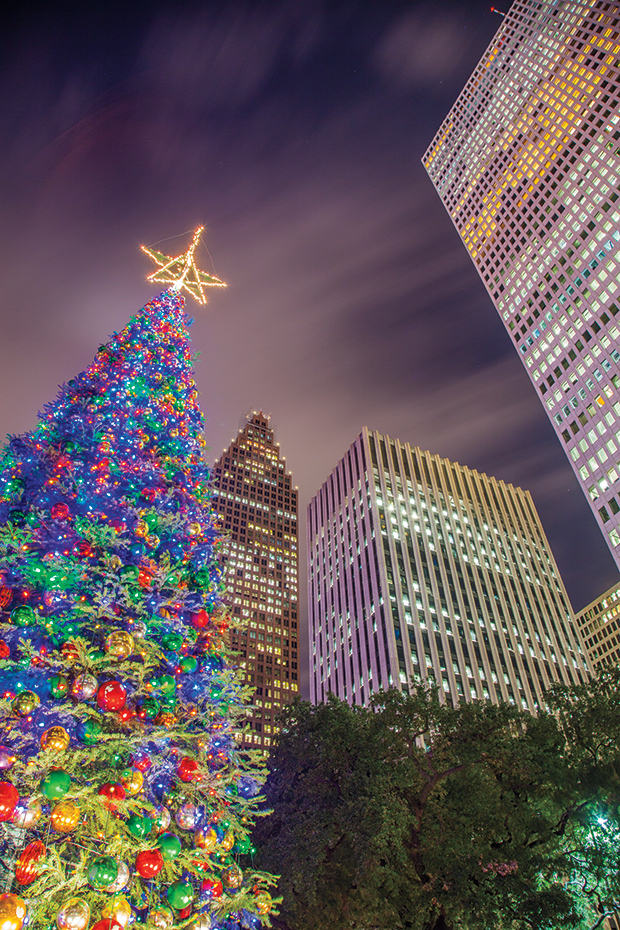 “I had been down to Port Aransas with my family in August, and we were amazed at the many starfish on the beach,” says Kenny.
“So I knew I wanted to combine the ideas of stars at Christmas with the stars on the beach.” 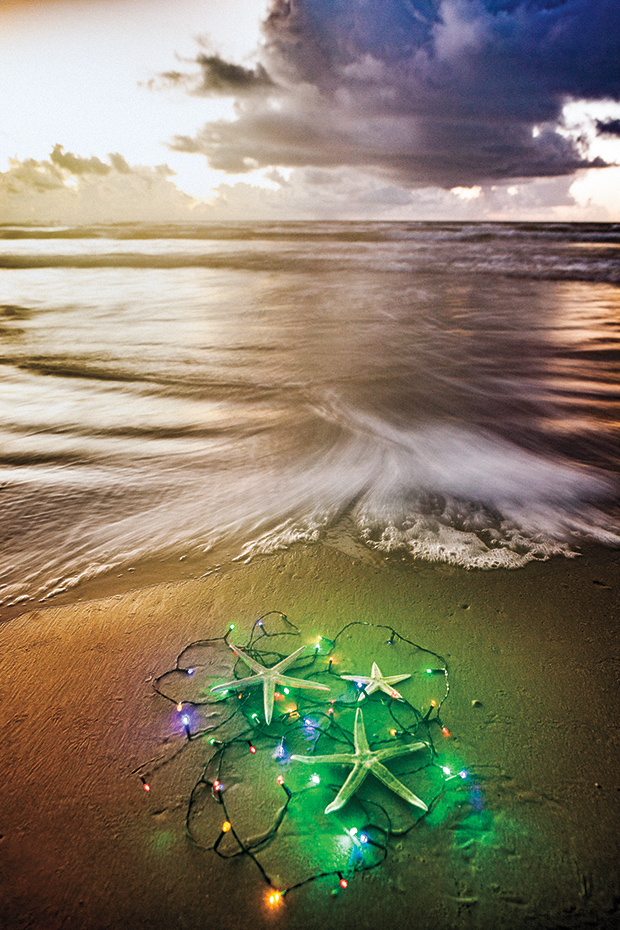 “I’ve been playing with the idea of Christmas lights in the wilderness for some time,” says Laurence of his Enchanted Rock shot. “It’s such a surprise to see lights like this where there is no electricity.” 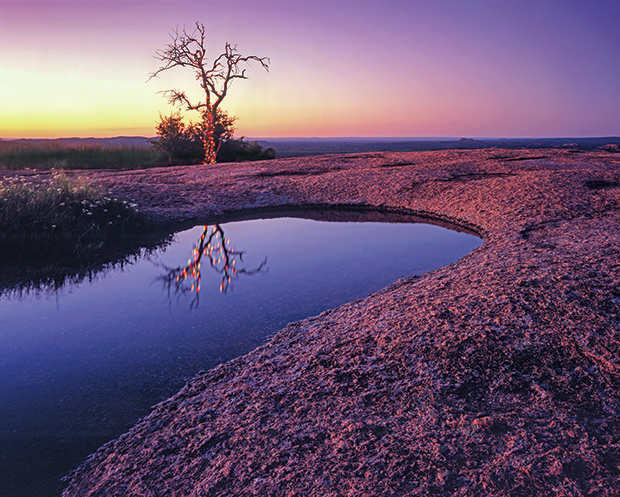 Bob Jones runs Spring Creek Growers in Magnolia with his wife, Carla, and their three kids. “When I saw this neat old tractor parked outside the antique barn, I knew this was my shot,” says Matthew. “I was hoping to capture a romantic view of Christmas, and this also speaks to the essence of their farm.” 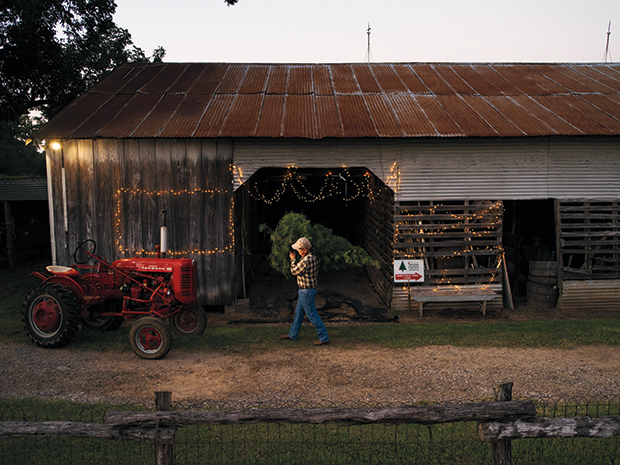 “Out here on the plains is the best place in the whole state to see windmills,” says Sean of his shot at Rita Blanca National Grasslands. “I wanted the feel of the open sky, because the skies become part of us, especially out on the prairie. And I wanted to capture the human drama of the lone windmill trying to pull a little bit of water out of the ground.” 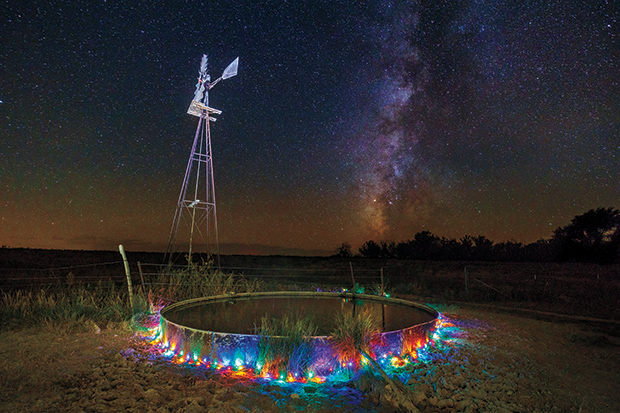