Celebrate history and music in this bucolic Piney Woods town 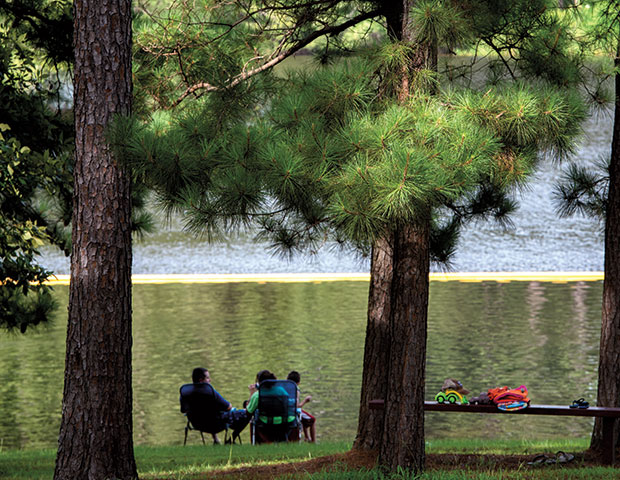 For a city-dweller used to noise, there’s nothing quite like waking up under a colorful quilt in an antique bed and then looking out the window over a small-town street scene that’s absolutely quiet. That’s how my day began at the Warfield House Bed and Breakfast, just a couple blocks from the Crockett town square. Of course, you can find this pleasure in many small towns, but Crockett, population 6,500, happens to be one of my favorite burgs. Crockett offers equal parts history, culture, and outdoor activities, making the most of its rich heritage and the natural beauty of the Piney Woods of East Texas.

The Crockett Area Chamber of Commerce provides visitor information and offers tours of the town and its historic sites by appointment. Call 936/544-2359.

In the front room, a beautiful 100-year-old quilt and a bulky 150-year-old sewing machine vie for attention with handwritten letters of Andrew E. Gossett, a Houston County settler who fought in the Texas Revolution and donated the land on which Crockett was built. The Gossetts named the town after Davy Crockett, a boyhood friend of Andrew’s father, Elijah Gossett, in Tennessee. Crockett is believed to have camped near here on his way to the Alamo in 1836.

Also in the museum, photographs and memorabilia celebrate bull rider Myrtis Dightman, a Crockett native who in 1961 became the first African American to qualify for the Professional Rodeo Cowboys Association National Finals Rodeo. In 1997, Dightman was the first living African American inducted into the National Cowboy Hall of Fame. Each Labor Day Weekend, the Myrtis Dightman Hall of Fame Rodeo and Trail Ride—held at the Porth Ag Arena—honors his pioneering achievements.

In the museum’s other rooms, cotton and agricultural tools portray the story of Houston County’s development. So do bigger displays, such as a re-creation of the local offices of the Houston-Leon County Coal Company, founded in 1900 to mine lignite; the 1930s vintage counter of Bishop Pharmacy; and memorabilia from the local Coca-Cola bottling plant, run by the Edmiston family for 109 years until it was sold in recent years. It turned out to be one of the more diverse small-town museums I had seen in Texas. 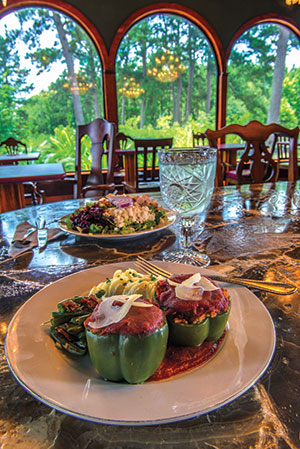 Larry Bruce Gardens grows fresh produce for the onsite restaurant, where he and his wife, Sara, serve a buffet lunch in a bright dining room with broad windows overlooking the gardens.

“Everything here is donated by people from Crockett and Houston County, and we’re always looking for more,” Harrison said.

After the museum, a stroll around the square seemed in order, but first I went a few blocks north to Rosemary’s Hilltop Kitchen for a buffet lunch of Southern favorites. Rosemary’s offered an ample spread, but most of the diners seemed unable to pass up the fried chicken. After helping myself, I could see why: The skin was crisp and crunchy, with moist meat inside.

Back on the square, a patchwork of new and old buildings, I ogled coonskin caps in the window of Davy Crockett Drug. And in Millar & Berry Antiques, one of those delightful, stuffed-to-the-gills stores with items like linen postcards, vintage furniture, and Depression glass, I stumbled onto my prize find: a hefty iron paperweight of a cowboy, complete with hat and boots … on the green, lining up a putt. Evoking an emphatic “huh?,” it was reasonably priced and thus irresistible. I bought it and quit shopping while I was ahead.

That evening I went to meet Pipp Gillette at his Camp Street Cafe & Store on Third Street. Camp Street (Third’s original name) was once the business strip of Crockett’s African-American community. Over the years, the 1931, false-front tin building has housed a barbershop, pool hall, taxi stand, and café. Pipp and his late brother Guy spent summers on their grandfather Hoyt Porter’s ranch at nearby Lovelady. In 1983, the brothers moved from their native New York to take over the ranch. Their grandfather’s Camp Street building was part of the deal, and they restored it in 1998. A singing duo specializing in cowboy music, the Gillette brothers fashioned the café into a live music club presenting acoustic roots music like blues, cowboy, Cajun, old-time, and bluegrass on weekends. Photos, posters, and newspaper clippings hang on whatever wall space isn’t already covered by signed promo shots of the artists who’ve played there.

The Gillettes also researched the neighborhood and its role in Texas music history. In 2002, they spearheaded an effort to get the Piney Woods Arts Association and city businesses to commission local artist Jim Jeffries to create a statue of quintessential Texas bluesman Lightnin’ Hopkins across the street from the café. A native of nearby Centerville, Hopkins was a Camp Street fixture before moving to Houston in the ’40s to make his name.

“You’d be surprised how many people have come to see [the statue] from around the country and even around the world,” Gillette said.

In 2013, Gillette helped make possible a mural of East Texas blues artists painted by Crockett High graduate Robert Morrison on the brick wall of the Knox Furniture building at the corner of Goliad and Camp streets. Vibrant, larger-than-life likenesses of Hopkins, Clarence Gatemouth Brown, Frankie Lee Sims, Blind Lemon Jefferson, Texas Johnny Brown, Big Mama Thornton, and T-Bone Walker look down on the street where these musicians once hustled to earn a living.

I decided to start the next morning with a little physical activity. Just a 20-mile drive east on Texas 7 is Davy Crockett National Forest and Ratcliff Lake Recreation Area, home to camping and picnic sites, hiking trails, and a lake with fishing, swimming, and non-motorized boating. There’d been moderate rain overnight, leaving the morning air cool, clear, and clean as I walked down a short length of the Lakeshore Trail. For 15 years at the dawn of the 20th Century, the Four C Mill, among the largest sawmills west of the Mississippi, occupied the area, along with its company town of Ratcliff. (Visitors can see concrete and brick ruins of the sawmill on the sawmill driving loop.) I wandered around the lake before heading back in the general direction of my car. Before I got there, I noticed a marker for the Tall Pines Trail, so I took that deeper into the woods, until it was so quiet that a simple bird chirp sounded like a scream. (Spring flooding damaged the park’s infrastructure. Check with the park before visiting.)

Crockett offers equal parts history, culture, and outdoor activities, making the most of its rich heritage and the natural beauty of the Piney Woods of East Texas.

Next, I returned to my car for the short drive to Larry Bruce Gardens outside Kennard, a small town about 17 miles east of Crockett. Bruce had been in the landscaping business since 1985, but decided after the 2008 economic downturn that he’d be better off growing food on his property, which has been in the family for five generations.

Bruce’s gardens have expanded from one to seven acres since then, growing fresh produce for the onsite restaurant, where he and his wife, Sara, serve a buffet lunch in a bright dining room with broad windows overlooking the gardens. The restaurant, which also sells canned fruits, vegetables, and jams from the gardens, opens for lunch Tuesday-Friday and Sunday; reservations are required. On the Sunday I visited, we started with the salad bar, featuring mixed lettuce, spinach, and an array of other fresh vegetables. Then there was rich, smooth tomato-basil soup, which perfectly blended sweet and tart. The main course was lasagna in a tangy tomato sauce, with flavorful green beans and red potatoes on the side. A slice of chocolate chip cake with vanilla ice cream ended the meal—and I smiled for the entire three-and-a-half hour drive back home to Austin.