All the Right Notes 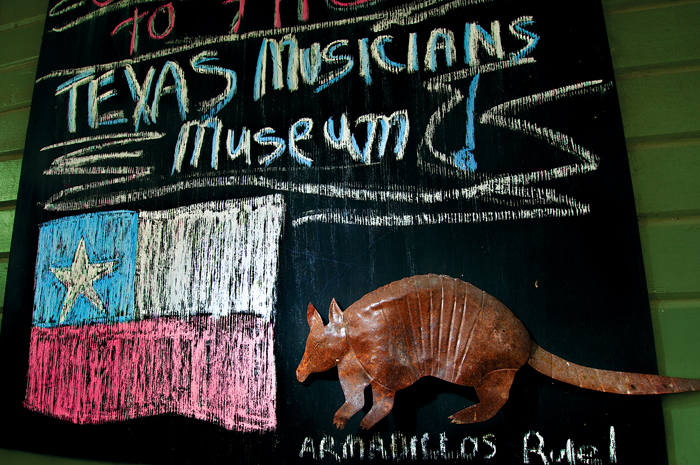 A sign on the front porch of the Texas Musician’s Museum welcomes visitors from across the globe.

Sighting the Texas Musician’s Museum, two blocks north of Hillsboro’s restored courthouse, gave me the metabolic mellow-down that comes when you disembark from the city into the country. The museum occupies a two-story frame house that looks like an apple pie should be cooling on a sill. But I knew to expect a good music exhibit because Director Tom “T.K.” Kreason is a seasoned gleaner of music memorabilia, addicted to collecting since he was exhibits curator for Dallas’ Hard Rock Cafe in the 1980s. He opened the museum in June 2007 to educate the public about Texas music history and showcase his archives—currently tens of thousands of items. He changes exhibits every few months, usually highlighting 100 musicians or groups at a time.

The inside’s not brightly lit. I like that. In contrast, Cleveland’s Rock and Roll Hall of Fame and Museum is lit up like an airport concourse, with chrome and glass everywhere. Here, my boots make a satisfying clunk on the hardwood floors. And in Cleveland, I doubt a docent would whip out a record and yell, “Listen! Listen!” while playing it, as Kreason did, on a turntable battened among exhibits. Kreason smiled as if he were swigging fine bourbon while he spun “Blues In A Bottle” by Prince Albert Hunt’s Texas Ramblers (Okeh, 1928). It’s one of those genre jumbles characteristic of Texas music, melding blues, jazz, and old-time fiddle. And I was hearing it on honest-to-gosh vinyl with requisite scratches and pops, an aural condiment to the place’s rootsy feel.

I gawked at framed blues 78s of nape-tingling rarity—Zuzu Bollin’s “Why Don’t You Eat Where You Slept Last Night?” and Freddie King’s “Country Boy”; both so rare that learning their value is difficult. I admired other 78s, too, by artists Clarence “Gatemouth” Brown, Lightnin’ Hopkins, Texas Alexander, and proto-rocker Big Mama Thornton. On the walls hang numerous posters, including one from Dallas’ RL Blues Palace (one of earth’s last great blues clubs) touting Texas’ own Bobby Patterson, who donated an outrageous faux-leopard pantsuit for the exhibit.

Kreason showed me a Tanya Tucker pantsuit red as a fire truck, a Jim Reeves tux that manages a soft élan like its wearer’s music, and the embroidered jeans worn by Dixie Chick Emily Robison on the group’s  “Fly” tour in 2000. Buddy Holly grins with heart-mashing boyishness in photos flanked by 45s, contracts, and suit receipts. And Janis Joplin’s comically frumpy black dress hangs beside a 1960 Port Arthur high school yearbook affirming that she was a member of the Slide Rule Club. (Not the only time someone geeky morphed into a star.)

Kreason told me he has entertained visitors from Germany, Bali, the U.K., Japan, and France. Only a couple of days before, he said, “A gentleman from St. Petersburg, Russia, spent three hours here. He’d come to Dallas for a concert but said this was the high point of his trip.”

The personable Kreason (who somewhat resembles actor Jeff Bridges) will conduct a tour if you wish, his narratives both informed and informal. Most guests take the tour and linger afterwards, to peruse and reflect at will.

There are Gene Autry records and photos, and lobby cards from his movies (such as Guns And Guitars, 1936). I gaped at garish get-ups for Hank Thompson and Ernest Tubb, the former florid with flame-shapes, the latter a dull gray, like a leisure suit worn by a sad clown.

The place is rife with surprises. I didn’t know Dale Evans, a native of Uvalde, was a seasoned pop and jazz singer before becoming Queen of the Cowgirls on The Roy Rogers Show on TV in ’51. But on view are records she made pre-Roy and a perkily risqué PR photograph of her in showgirl-style tap pants. I lingered over a couple of 1950s Dell comic books (“Still Only A Dime!”) with Dale on the cover; they brought back memories.

Kreason says he enjoys hearing how folks relate to the exhibits. He mentioned last year’s celebrations surrounding the 40th anniversary of Woodstock, and then re–minded me of the Texas International Pop Festival in Lewisville, which happened over Labor Day weekend in 1969 with an equally stellar lineup. It wasn’t filmed or recorded, so the event is a relative footnote in rock lore. He pointed to a classically dizzy Sixties-style poster, signed by artist Lance Bragg, from the fest (featured: Janis, Sam & Dave, Johnny Winter, Santana, Spirit, Sly & The Family Stone, Ten Years After, and—in one of their few festival appearances—Led Zeppelin).

Kreason fell silent a moment, and we gazed. How ephemeral the past can seem without objects to evoke it. And how often such objects vanish in time’s stride!

As I drove back to Dallas, I pondered the museum experience. Music is often rife with turbulence, as are musicians’ lives, and for that matter, our lives, as well. But Kreason’s little museum is calming as it opens the conduits of memory and exhibits fascinating memorabilia from the soundtrack of human experience.