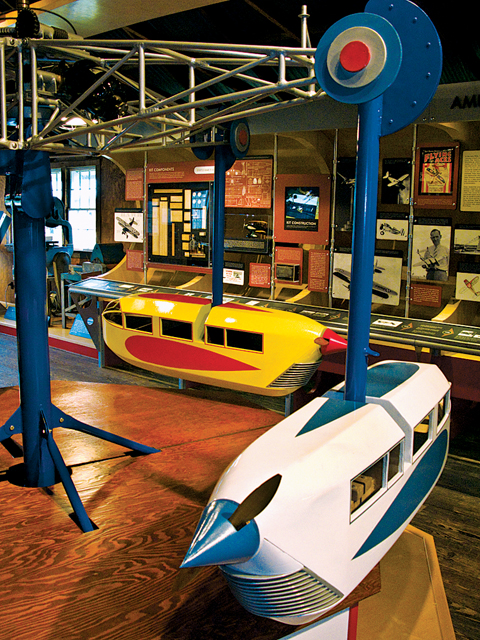 The Stanzel brothers developed carnival rides, including the 1940s G-Ride, which never went into production. (Photo by J . Griffis Smith)

Long before a renovated dance hall and tours of painted churches put Schulenburg on the map, the name was printed on thousands of boxes of Stanzel Company model-airplane kits that were shipped to kids from Maine to California. Today, the Stanzel Model Aircraft Museum is more than a hobbyist’s paradise; it shows anything is possible if you follow your passion.

The main building features 30 displays highlighting the groundbreaking achievements of brothers Victor and Joe Stanzel, who would eventually own 25 patents. While baseball-card collectors have their Honus Wagner, model-airplane enthusiasts have the Tiger Shark, and the original prototype is on display here. The Stanzels unveiled the Tiger Shark in 1939, the first control-line model-plane kit in the world. Previously, model airplanes were carefully built, painted, filled with fuel, and set off for their maiden—and usually final—flights. The Stanzels would continue their innovations in motorized control-line flight with models capable of speeds well over 100 mph.

The adjacent factory museum was the Stanzel Company’s original manufacturing facility. Neatly tucked among giant pieces of machinery is one that’s not so giant: an antiquated Maytag washing machine used to adhere the stickers on model wings. In the 1950s, the Stanzels shifted to pre-assembled toys without skipping a beat. Victor’s imaginative toys and packaging—like the Electromic Scoot Air Car and Space-Kraft Star Raider—are the Holy Grail for collectors of kitsch. Call 979/743-6559; www.stanzelmuseum.org.