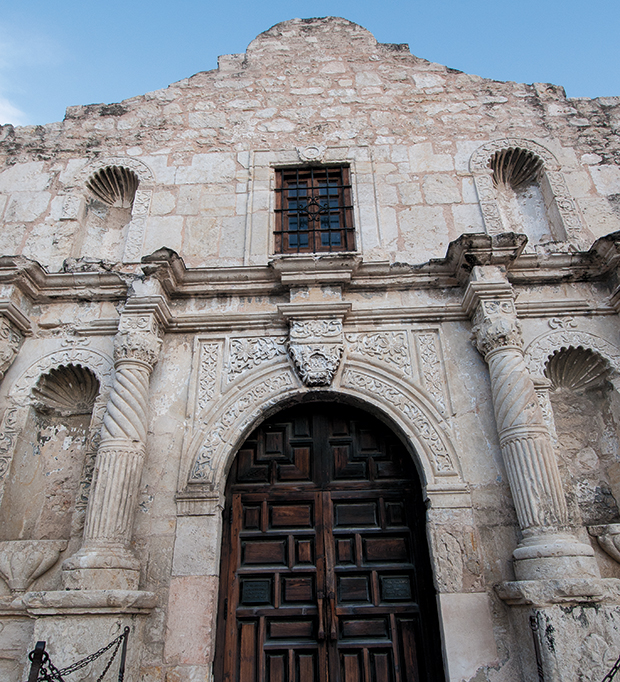 In second grade, I received a beautiful Alamo diorama for Christmas, complete with plastic soldiers and a cardboard backdrop, perfect for replaying the battle over and over with alternate endings. That same year my class visited the “Shrine of Texas Liberty,” where we listened to holograms of William B. Travis and David Crockett recount their experiences in the infamous battle.

Follow updates on the Reimagine the Alamo project at www.reimaginethealamo.org.

The Reimagine the Alamo master plan follows a host of changes at the site in recent years. In 2011, the Texas General Land Office assumed oversight of the Alamo from the Daughters of the Republic of Texas, a nonprofit women’s organization that had been custodians of the site for more than a century. In 2015, the Alamo Complex Management organization took over day-to-day operations. Also in 2015, the United Nations Educational, Scientific, and Cultural Organization (UNESCO) designated as a World Heritage Site the Alamo and its four sister missions in the San Antonio Missions National Historical Park—San José, San Juan, Espada, and Concepción. The World Heritage designation, which recognizes places of exceptional cultural, historic, or scientific importance, typically fosters greater protection for the sites and generates worldwide tourism interest.

While there are hundreds of World Heritage sites throughout Europe and Latin America, there are only 23 in the United States and only three in U.S. cities: The Statue of Liberty in New York Harbor, Independence Hall in Philadelphia, and the San Antonio Missions.

Like many Texans, my childhood fascination with the Alamo inspired a deep appreciation for history, and now, 20 years later, I teach the subject to high-schoolers and live only a mile from the hallowed mission site. And so, I’ve followed closely as the Alamo has become the focus of renewed attention in recent years, including its designation as part of a World Heritage Site and a forthcoming project to renovate and restore the 4.2-acre Alamo grounds and the adjacent Alamo Plaza.

Located in the heart of downtown San Antonio, just steps from the River Walk, the mission is one of the most visited sites in Texas, attracting 1.3 million visitors a year. Tourists from across the globe come to see where General Santa Anna and the Mexican army besieged a few hundred Texan defenders, led by Travis and James Bowie, during the Texas Revolution. The Battle of the Alamo on March 6, 1836, claimed hundreds of lives on both sides. The Mexican army overwhelmed the rebels, and Santa Anna took no prisoners, inspiring the revolutionary cry, “Remember the Alamo!”

Spanish Catholic missionaries established Mission San Antonio de Valero—what we now call the Alamo—in 1718. The missionaries built the Alamo and four other missions along the San Antonio River in the early 18th century to spread Christianity to the area’s indigenous people. About 1,000 Native American converts were buried in a Catholic cemetery on the grounds while the mission was active, according to archdiocese records.

Recognizing the significance of 2018 as San Antonio’s 300th anniversary, the city, the Texas General Land Office, and the private Alamo Endowment recently embarked on a new master plan called Reimagine the Alamo.

Backers describe the project, which is expected to be complete by 2024 and cost from $200 million to $300 million, as an effort to enhance the site’s historical context and to create an experience less about amusements and more about honoring a sacred place. Possible changes include making the plaza more pedestrian friendly by relocating the boot-shaped Cenotaph (a monument to the unburied dead commissioned during the 1936 Texas Centennial) and removing vehicle access on South Alamo Street. On the Alamo grounds, the project aims to reinterpret the historic acequias that brought water from the river to the mission’s first residents. The study will determine the mission’s preservation needs, both structural and aesthetic.

“Most people think the Alamo is only the shrine,” said Becky Dinnin, executive director of the Alamo Endowment. “Right now, you can’t see the whole battlefield because there are three lanes of traffic and the plaza running through it—there’s a lot going on. What we’re trying to do is recapture as much as we can of the footprint of the mission and battlefield so it’s easier for visitors to understand.”

The state recently acquired three buildings across the street from the Alamo, including the Guinness World Records Museum, Ripley’s Haunted Adventure, and Tomb Rider 3D. The plan calls for moving these attractions to a new “entertainment district” nearby and replacing them with a museum and visitor center that will feature a gallery dedicated to the 1836 battle and display the collection of Alamo artifacts donated by British pop star Phil Collins in 2014.

As part of the project, archeological digs are yielding artifacts and understanding about life in and around the missions during the 18th and 19th centuries. A 2016 excavation clarified the positions of the original south and west walls and uncovered various smaller artifacts, such as bone buttons, square nails, glass shards, and ceramic pieces.

Preservation Design Partnership, a Philadelphia architecture firm that specializes in historic preservation, is directing the development of the Alamo master plan. Design Director George Skarmeas presented the most recent iteration to the San Antonio City Council in late November. He spoke to the importance of restoring the complex and plaza with a design that appropriately serves visitors and locals while decommercializing the plaza and respecting the sacred, historic site.

“The only thing that has remained constant over the last 300 years is the church itself,” Skarmeas said, referring to the well-known facade of the chapel. “It is our guiding light.”

Many locals welcome the planned changes, hoping they will round out the site’s history as it pertains to the experiences of Mexicans and Native Americans. “Everything that actually happened there is not represented,” said Siboney Diaz-Sanchez, a San Antonio native.

Though some see room for improvement, a visit to the Alamo is a crucial experience for anybody interested in Texas and North American history. On a recent visit, I noticed the reverence of visitors as they walked through the church, including the sacristy where Susanna Dickinson and other survivors huddled as they listened to the battle raging outside. Other exhibits include a list of the names of the Alamo defenders and a rifle that Crockett sold en route to Texas.

Visitors’ whispering voices reverberated off the church’s thick limestone walls, contributing to the sense of solemnity. Leaning over the chains of closed rooms, I could see thin shards of pale limestone that have flaked off the walls in recent months. Part of the master plan includes an analysis of the building’s disintegration with the goal of long-term preservation.

Adjacent to the chapel, the gift shop building houses a detailed diorama of the battle that gives visitors a sense of what the battle was like. “It puts it in perspective,” a visitor remarked. “You feel like you’re there.” In the historic limestone-and-mortar Long Barrack, additional exhibits recount the mission’s history and the Alamo battle. The Alamo also offers audio tours and guided tours for visitors wanting more in-depth information.

Visitors who walk the grounds of the Alamo today see various illustrated displays of the landmark site and surrounding landscape, ranging from the early mission period to the mid-19th century. Future plans call for enhanced historical depictions, including the possibility of a lifelike hologram portrayal of the battle. Above all, the master plan calls for creating a space that will enable visitors to better visualize the evolution of the Alamo through time and the footprint of the mission and the battlefield.

“These ideas will change the way people understand and experience the Alamo, and that change has been a long time coming,” said Councilman Roberto Treviño, whose downtown district includes Alamo Plaza. “We are excited about showcasing the Alamo in its proper historic context.”

Every time I visit the Alamo, I learn something new and leave with a renewed sense of place. San Antonio residents and all Texans should be excited about the changes to come.