Run with a Ranger at Enchanted Rock 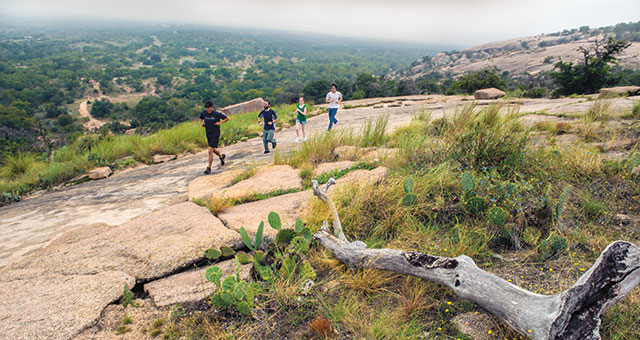 We’ve been running for about 15 minutes—skipping over small boulders and sidestepping cacti that spike up from a trail winding the perimeter of Enchanted Rock State Natural Area.

Tiny rocks slide and crunch underneath my feet as I try to stay balanced. I know that bits of gravel are flying back and pelting my boyfriend, who’s a couple of paces behind, but there’s nothing I can do about it. I focus my eyes down and in front of me, on the wiry legs of Ranger Scott Whitener, who glides across uneven terrain with the muscle memory of a veteran trail runner.

While most of the other park visitors are hiking the Summit Trail—a .6-mile incline leading to the park’s namesake dome, Scott is taking us on the four-mile Loop Trail as part of the park’s monthly Run With the Ranger program, introducing a group of rookie trail runners to the hidden gems of the park trails. Squinting, I make out the tiny silhouettes of hikers at the top of the Summit Trail, and I feel like we’re in on a secret: Some of the most spectacular views at the park aren’t from the top of Enchanted Rock at all, but are found all around its perimeter.

There are actually seven granite domes at the park, with the 1,825-foot Enchanted Rock being the tallest. We run past (and sometimes, up) most of them as we follow Scott in a wide, winding circle. The route leads us up to look-out points where we can observe the rolling landscape from new angles. We’ve stopped for one such view—and to catch our breaths—at the top of a long incline that brought us up-close with the back of a dome known as Little Rock. Like the other domes at the park, Little Rock is known as an exfoliation dome; as the outer layers of rock break and slide off, the next layer begins to peel away.

Scott tells us that these domes have been slowly changing shape for as long as 1 billion years; they formed when molten rock deep underground pushed through the earth’s surface and cooled—all 18 miles north of present-day Fredericksburg. “It’s the heart of Texas,” says Scott—the only one of us not out of breath.

There are more than 100 protected archeology sites here, and the entire park is listed in the National Register of Historic Places as an Archeological District.

Scott seems genuinely happy to run at our speed. He is passionate about introducing people to trail running to encourage fitness and a kind of tranquility. “The reason to run trails is so you aren’t surrounded by roads and cars,” Scott says. “I’ll knock 10 miles out, but I always make sure I smell the roses.”

And Enchanted Rock, with nine miles of trails, offers an abundance of roses to smell, so to speak—whether you run or walk. As Scott puts it, “It’s a great playground.” And one that humans have been playing on for centuries. Certain depressions in the granite, called bedrock mortars, indicate the presence of prehistoric people pounding or grinding their food on the rocks throughout the park. These days, there are more than 100 protected archeology sites here and the entire park is listed in the National Register of Historic Places as an Archeological District.

Running the trail, I am constantly looking and thinking—should I jump over or around that boulder? How steep is this downhill? Or even—yikes, was that a rattle? (“If you hear a rattle, that is what it is,” Scott tells us matter-of-factly.) The need to focus on my steps forces a kind of meditative state that allows me to be awed by the splendor of the park, while challenging myself within it. I’m not going for a best time, but I’m not just aimlessly wandering, either. The physical challenge makes me that much more tuned into—and appreciative of—the park’s beauty. “I find something different every run,” Scott says.

As we run our final stretch, I have finally hit a rhythm. In front of me, bursts of early-spring color pop out in the most unexpected places. Tall purple and blue wildflowers grow down the middle of the trail. Lichen—an extremely slow-growing composite of fungi and algae—covers some rocks, turning them unusual shades of orange and blue. A dulled and bone-dry cactus is in bloom with a fluffy yellow flower.

To me, it’s these intense signs of life amid the dry air and hard rocks that make this area feel truly enchanted. And it turns out that here, as in life, the real magic is found by running the trails less traveled. 