Written by: Sofia Sokolove
Photos by: Will van Overbeek

Written by Art Williams, Photographs by Will van Overbeek | From the January 2017 issue | Updated: December 16, 2016 | Filed Under: TRAVEL 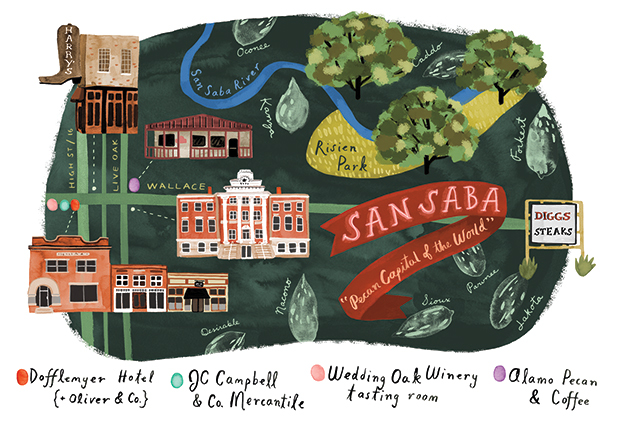 As my friend and I pull into the parking lot of the newly renovated Dofflemyer Hotel in downtown San Saba, the first thing we notice is a weathered mural across the street from the parking lot on the whitewashed back wall of R.B. Bagley & Sons Pecan Company. “Buy Pecans Here,” it declares. And we know, officially, we’ve arrived in the right place.

We have big plans for our weekend getaway in this Central Texas town nicknamed the “Pecan Capital of the World”—especially because there’s more to San Saba than pecans these days. And the Dofflemyer, located at the central crossroads of US 190 (Wallace Street) and Texas 16 (High Street), is an ideal base for exploring the town’s offerings both classic and new, from shops and eateries to a winery and verdant natural parks along the San Saba River.

Originally built by W.C. Dofflemyer as a bank in 1913, the Dofflemyer Hotel building had long been vacant when local attorney Clay Nettleship and his business partners, Hughes and Betsy Abell, bought it in 2011. Their restoration project, completed in 2015, combines design elements of rustic Hill Country and industrial chic, while preserving features like the original bank vaults on the first floor. Historically, the second floor was the San Saba Club, a gala venue and society gathering spot for card-playing; it now holds five rooms and one suite, each distinctively decorated.

“San Saba’s buildings have so much potential,” says Clay, a San Saba native who laid out the plans for the building’s renovation. Clay’s involvement in the Dofflemyer is his sixth renovation project in recent years. He’s also involved in Wedding Oak Winery and the 1910 Campbell-Hagen building, which now houses J.C. Campbell & Company Mercantile.

Clay attributes San Saba’s surge of architectural renovations and restorations to the town’s wealth of early 20th-Century buildings, along with “tremendous buy-in from the community” and “a progressive city council.” Or, as one woman we meet puts it: “We’re bringing our old buildings back. It’s a lot of fun.”

With a large window centered on a wall of exposed brick, our room at the Dofflemyer is a fine example of Clay’s vision. Above our beds hang two framed black-and-white prints of pecans, artfully illustrated. And nestled on our colorful, gold-stitched pillows in lieu of chocolate? You guessed it: two bags of San Saba’s finest nuts.

Eager to begin our day, we stow our bags, grab our pecans, and head out on foot, taking a right on Wallace Street toward our first stop: Harry’s Boots—a sprawling shop featuring 15,000 square feet of all things Western wear. As we near the shop, the smell of leather hits us before we even step inside.

Founded in 1939 by Ike Shapiro (whose son, Harry, later joined him in ownership), Harry’s passed through three owners and various renovations, gradually expanding to five buildings, including an 1885 building that was once the local hardware store. While nearly all of the buildings have been restored, a remnant of the hardware store remains. On a back wall, beyond rows of boots, belt buckles, and tack, a handwritten data chart records the history of the town’s important weather events since the 1920s.

After a quick trip upstairs to the dedicated hat floor, where I narrowly avoid blowing my weekend budget on a silver felt Stetson that fits like a glove, we head back out onto Wallace Street.

We happily spend the afternoon wandering in and out of San Saba’s shops, which range from gift outiques like the charming Madeline & Me to the spacious J. C. Campbell & Company Mercantile, which brings together 12 or so vendors of antique treasures, apparel, and gift items. Where Wallace meets Live Oak Street, we admire San Saba County’s Classical Revival-style courthouse, with its two-story columns and domed clock tower. Built in 1911, the courthouse greets visitors with a saying carved over the brick-and-sandstone entrance: “From The People To The People.” 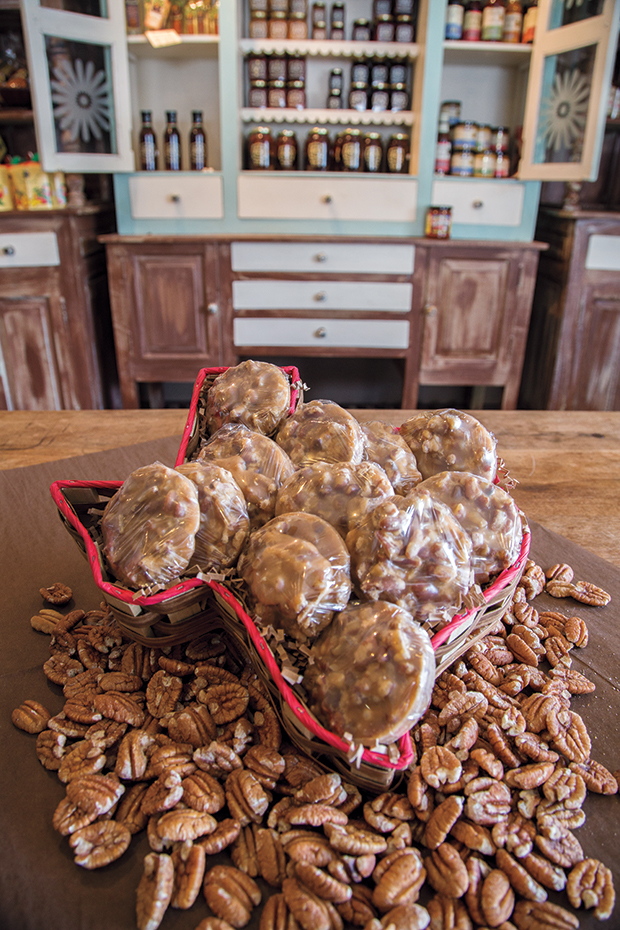 At this point, we decide we’ve earned ourselves a glass of wine. Wedding Oak Winery, named after a 400-year-old oak tree just outside of town, is a convenient skip away from the Dofflemyer. (Legend holds that the tree has been a symbolic site for weddings since Native American times.) The winery opened its tasting room in 2012 in a 1926 building that connects to the 10,000-case production facility. Owner Mike McHenry, who offers us Goldfish crackers between tastings (“the best palate cleanser!” he attests), is committed to making wine from Texas grapes. Wedding Oak’s winemaker, Penny Adams, uses grapes grown in Wedding Oak’s estate vineyards, as well as other Hill Country and High Plains vineyards.

We enjoy our taste of the 2014 Tre Vi (a blend of three white grapes) so much that we each decide to buy a glass and head outside to Wedding Oak’s patio, where a band is playing, and where we quickly realize that we’re the only people who do not know everyone at this local hangout. No matter. A friendly couple welcomes us to their table and invites others over to meet us, introducing us as “their new friends from Austin.” By the end of our glass, it feels as if we are honorary members of San Saba’s close-knit extended family. We might have stayed all evening had we not made dinner plans at Digg’s Restaurant and Club, about a mile-and-a-half east of the Dofflemyer on US 190.

We grab a booth in Digg’s packed, cozy dining room and order the specialty of the house—a mesquite-grilled steak. Served with a perfectly baked, buttery potato wrapped in tinfoil, my steak is one of the most tender and well-seasoned sirloins I’ve had in a long time. As we eat, the restaurant begins to empty out as diners head through the bar and into the connected pool hall. When we finish our meal, we follow suit. Over the pulsing of pop music, a game of pool, and two Lone Star longnecks, we toast our successful San Saba adventure.

We’re scheduled to head out the next morning, but not before breakfast at Oliver and Co., located in the Dofflemyer building next door to the hotel. We order coffee and gooey, delicious cinnamon rolls. Next, we stop at Alamo Pecan & Coffee to pick up pecan brittle for the road. Then it hits us: Our weekend itinerary has somehow overlooked the town’s cash crop. We decide to make a detour to what we’ve heard is San Saba’s most magnificent pecan grove.

When we get to Risien Park, we’re immediately disappointed we don’t have an entire day to spend there. The 80-acre park features rolling open green space, volleyball courts, grills, and an old stone amphitheater. The park connects with the San Saba River Nature Park, giving visitors 38 additional acres of greenbelt along the San Saba River.

We wander toward the river, pass over an old railroad trestle, and find ourselves in the sun-speckled shade of a lush canopy of pecan trees. De-spite having bought it “for the road,” we break into our perfectly sweet pe-can brittle and promise the trees we will return to their capital city soon.