See the Sights… and Save

Top Attractions made affordable in Houston and Dallas 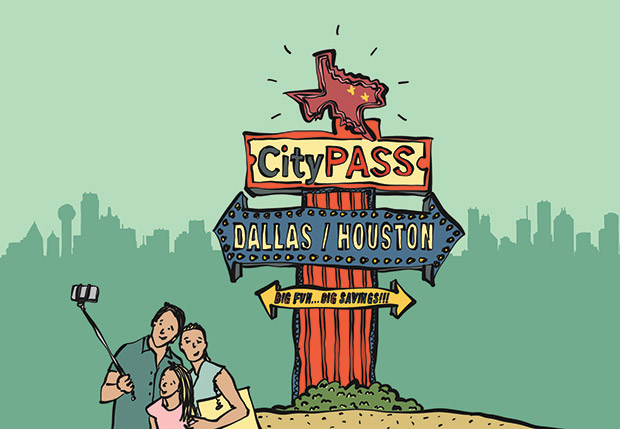 Anyone who travels to a big city for vacation knows that apart from lodging, food, and shopping splurges, the other big expense—especially if you have a family—is admission to attractions. Those costs can be shaved by at least 40 percent in Dallas and Houston, thanks to a program called CityPASS.

For more information or to purchase booklets, visit www.citypass.com.

CityPASS launched its program in San Francisco and Seattle about 20 years ago. The idea behind it was simple: Pick the top attractions in each city, bundle them together in a booklet that could be used over a period of nine days, and offer the pass as a discounted package deal at a savings of close to 50 percent off individual ticket prices.

These days, CityPASS is offered in 12 U.S. cities and regions, and travelers purchase more than a million booklets per year. In Texas, CityPASS Houston has been available since 2008, while Dallas got its CityPASS in 2015. Let’s look at what a trip with CityPASS could look like in each of these cities.

For $56 per adult (age 12 and older), and $46 per child, the Houston CityPASS grants you access to five Houston attractions, including Space Center Houston, the Downtown Aquarium, the Houston Museum of Natural Science, either the Houston Zoo or the Museum of Fine Arts, Houston, and your choice of the Kemah Boardwalk or the Children’s Museum of Houston.

Let’s say you want to spend the first afternoon doing something easygoing. Your first excursion could take you to either the Museum of Fine Arts, Houston, or to the manicured grounds of the Houston Zoo, where you’ll want to note the various animals’ feeding schedules before checking out the lions, gorillas, monkeys, birds, and reptiles. Make a beeline for the wonderful giraffe habitat, where, if you’re lucky, you’ll get to feed romaine lettuce leaves to several of the spectacularly long-necked creatures.

The next day, you might make the 40-minute drive to Space Center Houston, where your CityPASS lets you breeze by the long lines as you channel your inner astronaut. Feel what it’s like when a shuttle launches at the Blast-Off Theater, inspect the life-size
Galileo Seven shuttlecraft from “Star Trek,” then head to Independence
Plaza to explore the replica of the shuttle Independence and its NASA 905 shut-
tle carrier aircraft. Finish the journey with a 90-minute NASA Tram Tour through the 1,600-acre Johnson Space Center (tickets are timed, so you’ll want to book yours online ahead of time to avoid lines).

Perhaps you’ll want to take a break for a day to do some shopping at the Galleria mall. The CityPASS gives you the flexibility to have non-excursion days because you have nine days to use it.

When you’re ready for more arts and culture, however, you could spend several hours at the wonderland that is the Houston Museum of Natural Science. Stop by the Morian Hall of Paleontology to marvel at the dinosaur skeletons on display, and don’t leave without taking a peek at the beautiful jewelry gleaming in the gem vault.

With just three attractions under your belt, your Houston CityPASS has already more than paid for itself. If you still have time, however, your booklet also contains a ticket for the Downtown Aquarium, and a choice between an outing at the Children’s Museum of Houston or an afternoon on the waterfront Kemah Boardwalk, either of which will make a fine conclusion to your stay in Space City.

Dallas’ CityPASS bundles your choice of four of Big D’s most popular attractions into a booklet that costs $46 per adult (age 12 and older) and $31 per child.

You’ll want to spend an afternoon at the Perot Museum of Nature and Science, a state-of-the-art learning space named for the family of entrepreneur and billionaire Ross Perot. The dinosaur exhibit, an 11,000-square-foot space where you can acquaint yourself with a Tyrannosaurus rex and other prehistoric animals, is stunning, as are the 10 other permanent exhibit halls, which let you explore the universe, learn about your body, discover rare minerals, and experience a tornado via a simulation exhibit.

For step two in your CityPASS booklet, take the elevator some 470 feet to the observation deck of Reunion Tower. Here, from the recently redesigned GeO-Deck, you can appreciate 360-degree views of the Dallas skyline, zoom in on landmarks via touch-screen computers, and learn more about the assassination of President Kennedy, an important if tragic chapter in the city’s history. On a clear day, you can see as far as 32 miles.

For your third outing, decide whether you want to spend an afternoon immersed in U.S. history at the George W. Bush Presidential Library and Museum, where you can take a photo in a full-size replica of the Oval Office; or if you’d like to spend the afternoon frolicking in the sun at the picturesque Dallas Arboretum and Botanical Garden—always fun for the kids and a gold mine for family photos.

Your last attraction might be the Dallas Zoo, which beckons with 106 acres of wildlife, including zebras, elephants, giraffes, and hippos. Families with kids might also pack their swimsuits for a break in the zoo’s wading stream. Alternatively, you can take a deeper look at President Kennedy’s life and legacy at the Sixth Floor Museum.

As with all CityPASS offerings, you’ll have nine days to use your tickets, which leaves ample time to explore areas such as Deep Ellum for live music and nightlife, or the Bishop Arts District for the quintessential Big D boutique
shopping experience.