A Day on the USS Lexington 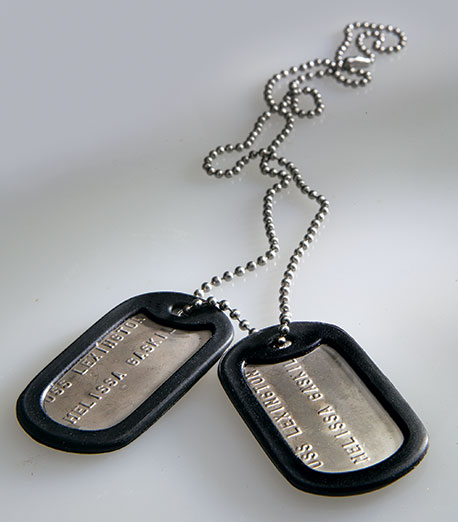 During the Civil War, soldiers were known to pin their names and addresses onto jackets or knapsacks in order to provide their identity should they perish in battle.

In 1913, U.S. Army regulations made identification tags mandatory, and by 1918, all soldiers wore aluminum discs on chains around their necks that bore unique serial numbers along with the soldiers’ names.

When I was a kid, my father, a B-25 pilot in the South Pacific in World War II, kept his battered dog tags in the top drawer of his dresser. Dad passed away in 2004, and while I have many mementos from his military service, the dog tags have somehow disappeared.

When I visited the USS Lexington Museum on the Bay in Corpus Christi, a machine in the gift shop caught my eye. “Make your own dog tags,” it invited, and while nothing could replace my dad’s real ones, I decided they could be a fun reminder of my dad as well as a souvenir of my visit.

Commissioned in 1943, the Lexington served longer and set more records than any Essex Class aircraft carrier in the U.S. Navy. She joined the Fifth Fleet at Pearl Harbor and participated in nearly every major operation in the Pacific Theater during World War II, spending 21 months in combat and racking up impressive statistics: Her planes destroyed 387 enemy aircraft in the air and 635 on the ground, her guns shot down 17 planes and assisted in downing five more, and she sank or destroyed 588,000 tons of enemy cargo and damaged an additional 497,000 more.

The Lexington was briefly decommissioned from 1947-1955, then reactivated with the Seventh Fleet out of San Diego, California, deploying during conflicts in Formosa, Laos, and Cuba. In 1962, she began training operations in Pensacola, Florida, but was eventually replaced by a more modern ship. The retired carrier arrived at a berth on Corpus Christi’s north beach in 1992.

The massive, 16-deck ship—19 stories tall and as long as three football fields—is divided into five self-guided tour routes, which together take at least two hours to complete and can easily fill many more than that. I started with the Flight Deck, which today holds more than a dozen vintage aircraft ranging from 1940s trainers to an F-18 Tomcat.

Next, I followed the Foc’sle Tour, which covers the upper hangar deck on the front half of the ship, or bow. I walked through the original officer’s and junior officer’s quarters, a large exhibit on Pearl Harbor, and past enormous anchor equipment. The next level down, the Gallery Deck tour passes the Combat
Information Center, from which officers directed the ship in coordination with the neighboring air operations center and the carrier air traffic control center.

The Lower Decks tour covers the sick bay, dental clinic, and galleys, all featuring appropriately attired mannequins posed as if in the midst of a normal shipboard day. A Warbirds and Warships Scale Model Gallery here is jam-packed with intricate, true-to-life models of seemingly every military plane and ship known to man, including a B-25. There’s also a chapel on this level and living quarters for the museum’s overnight educational programs.

Then it was back up to the Hangar Deck. In battle, this 40,000-square-foot deck could have held up to 60 aircraft being refueled and rearmed between flights. Today, there are several aircraft on display here. This level also contains a theater, flight simulator, the Mess Deck café, and the ship’s store—my final destination.

Amid the varied collection of souvenirs, I found the dog tag machine. A clerk typed in my information, and after a few moments, out came two shiny metal tags. Slipped onto a ball chain, they look just like the real deal. Back home, I placed them on a hook next to my desk, a constant reminder of dear old Dad and my day on the Lex.