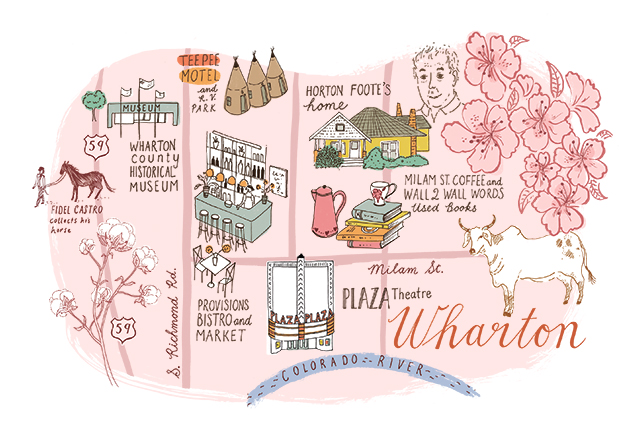 Wharton is the kind of town that invites you to relax on a wraparound porch with an old friend, sip an iced tea—or something stronger—and reveal some secrets. At least that’s what I wanted to do when visiting for a weekend last spring, standing on the front porch of Wharton-born playwright Horton Foote’s childhood home, peeking in at all the old photos on his mantel, and then looking out at the blossoming azaleas and old oak trees that adorn the front yard.

For Wharton visitor information, call the Wharton Chamber of Commerce at 979/532-1862.

Foote, who won Academy Awards for his screenplays of To Kill a Mockingbird and Tender Mercies, died in 2009 at the age of 92, but he lives on through his plays and films, which break your heart open with their simple beauty. He knew how to tell piquant, wistful stories about small-town Texas, and many of those stories took root right here on this front porch, right here in Wharton.

During my visit to Wharton, I could imagine how Foote found inspiration in his hometown. Everywhere I went, I discovered interesting stories. I heard them while clutching my vintage coffee mug at the down-home Milam Street Coffee and Wall2Wall Words Used Books shop, trying to wake myself up. Linda King, the woman with short white hair and comfy sandals who made my Americano, scooted around, rearranging the chairs from last night’s Java Jams music show. Her husband, Carl King, sat in his cowboy hat and Wranglers at a nearby table, chatting with a friend—about the packed house the night before; about the dancing that broke out when band leader Joe Flores closed the night with La Bamba. Every Texas town needs a gathering place, and this is Wharton’s.

Located on the Colorado River about 55 miles southwest of Houston, Wharton is no longer the agricultural boomtown of Horton Foote’s youth in the 1920s, when cotton, corn, and sugar cane prospered. The once-busy train station has closed and morphed into a weekends-only museum, many of the town’s grand homes now look hungry for repair, and the arrival of Wal-Mart made survival impossible for the beloved local grocery and department stores that once kept the main square bustling. But it has maintained a notable thread of kind, no-nonsense authenticity, something you see in many Horton Foote characters like Mac Sledge from Tender Mercies.

A shop owner named Mary Lee from Selections gift shop across the square popped in for coffee while I was telling Carl and Linda that I had stayed the night at Wharton’s kitschy Teepee Motel, one of the tepee roadside motels that sprang up along U.S. highways in the 1940s. The three of them regaled me with Teepee scoop: how Willie Nelson stayed there when he was a boy picking cotton; how it was rescued from disrepair by a guy from Eagle Lake who won the lottery; and how ladies from Katy like to rent out all 10 tepees and stay up until the wee hours drinking and telling stories around the fire pit.

While I could not corroborate Willie’s stay at the Teepee Motel, it is definitely true that the quirky landmark came back to life thanks to Bryan Woods buying that winning lottery ticket at J&K’s convenience store in Eagle Lake in 2003. He used part of his $49 million win to realize his wife’s dream of returning the motel to its former glory.

I parted ways with the coffee shop trio and headed one block up the street to a very different community hub—a new restaurant in Wharton so healthy, stylish, and tasty it would be at home in New York or Napa. Named “Provisions” because it was originally envisioned to be primarily a market for natural foods like homemade yogurt and organic butter, this little gem is somewhere I could waste away hours noshing on its fresh-made breads, soups, and salads while watching the way the light pours in through its floor-to-ceiling windows.

Debra Medina, the visionary and “real food” advocate who brought Provisions to life, is a great talker in addition to being a savvy restaurateur. Particularly since, as the owner of a medical billing firm with a background in politics, she’d never opened a restaurant before. While I sat at he bar, she filled me in about the renovation of this gorgeous 1897 property with towering ceilings and exposed brick.

As I sampled from the Texas wine list, Debra pulled out a big white bind-er with photos that showed how this architectural beauty had originally been a bank owned by local resident R.T. Erwin; although a disgruntled customer shot Erwin down in a Wharton bar, the building remained a bank for decades.

Debra pulled out another relic for me from the binder: a letter from J. Edgar Hoover dated 1938 that had been found stuffed in the building’s crown molding. It reported that a fugitive the FBI had been pursuing had been apprehended. For a minute there, it felt like all of the spirits of this old building were joining us at the bar, telling their tales, and I wished that Horton Foote were around to write it into a play.

I should mention that Foote is not even the most famous son of Wharton; another, different kind of storyteller grew up here, too—Dan Rather. You can visit his very tiny white childhood home while on the grounds of the Wharton County Historical Museum, which is another rich repository of local lore. Looking at the old photos of Wharton’s cotton-picking and Brahman cattle-raising past, you get an idea of how the town sits on the agricultural and cultural border between the Old South and South Texas.

Housed in the same building is the 20th Century Technology Museum, a storehouse of techno-gadgets that will shock your kids with tactile proof of what a telephone used to look like. The owners, Art and Sharon Schulze, own 80 to 90 percent of the treasures on display; to get the most of the experience, make sure you are there when Art is available to show you around. His enthusiasm for a Wurlitzer and other artifacts is contagious.

My adventures in Wharton came full circle when, back at Provisions, Debra introduced me to a pair of handsome men sitting at a nearby table. One of them, Van Broughton Ramsey, is a Wharton-born, Emmy Award-winning costume designer whose extensive oeuvre includes the Lonesome Dove miniseries, Horton Foote plays in New York, and The Trip To Bountiful, a 2014 TV movie based on Foote’s play.

Although Wharton is much changed since Van’s days growing up here, he and his partner, Robert Nelson, who live half the year in upstate New York, remain dedicated to this town and the sense of place it carries. They told me about the time Fidel Castro came through to pick up a horse promised to him by local rancher J.B. Ferguson, the owner of champion quarter horse Go Man Go. We talked about the very active local company at the Plaza Theater, where I had just attended a raucous, full-house performance of the comedy Noises Off the night before. They intrigued me with tales of international church trips, lively dinner parties, and the Beautification Commission. “I’ve never seen so many fish fries or pancake breakfasts in my life,” Robert said. “There is always something going on here to raise money or support someone.”

It seems that Horton Foote is not the only one who has found, woven deep into the fabric of this little town, a wellspring for good stories and nostalgia for home. And if you spend a little time here amid Wharton’s old front porches, tepees, and friendly community gathering spots, you’ll undoubtedly end up with stories of your own to tell.