From goblins to gobblin’: Halloween, Texas-style 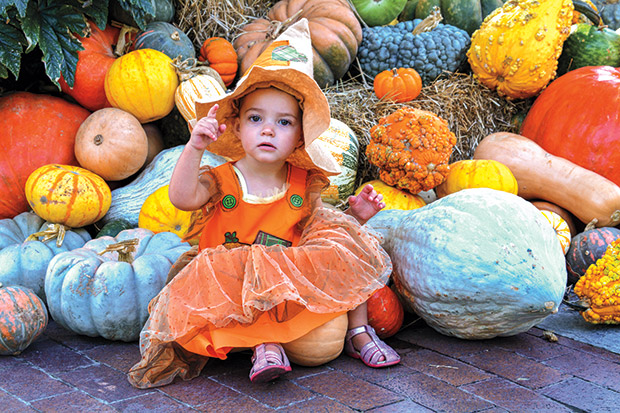 Happy Halloween, boys and ghouls of all ages! The season of jack-o-lanterns, field mazes, spooky houses, trick-or-treating, and other fall frolics has returned. Texas offers a trove of terror, as well as family-friendly fun to celebrate the season. Here are some of our favorite Halloween happenings

Fall lures families by the thousands to the always-blooming Dallas Arboretum, which creates a fantasyland of pumpkins during its Autumn at the Arboretum celebration from mid-September until Thanksgiving.

About 90,000 pumpkins will grace the 66-acre grounds this year, many of them stacked by the hundreds into whimsical houses festooned with vines, corn husks, and multicolored gourds. They’re big enough to go inside, and kids run in and out of these Pumpkin Village houses, navigate a hay-bale maze, and try their hands at identifying types of pumpkins, from green ones that look like super-sized cucumbers to spiny-rinded ones that resemble lemons and oranges.

Ghostly Galveston offers numerous spirit-stalking opportunities, but this hour-long tour aboard the 50-foot vessel Seagull II (Oct. 21-22 and Oct. 28-29) offers glimpses of spookiness you’d have trouble spotting from land. See places like Pelican Island, across the harbor from Galveston’s main island, where it’s said that the ghost of Jean Lafitte guards buried treasure.

You’ll learn about the fierce Karankawa tribe that long ago plied these waters in canoes as you glide past shrimp boats, cruise ships, and other crafts operating in this busy harbor.

The final ghost stop might keep you awake at night. On the north side of a University of Texas Medical Branch building, a stain easily recognizable as the face of man—possibly an angry former landowner—appears very clearly. The university has tried everything from pressure-spraying to sandblasting to remove the visage, but it keeps reappearing. For more details, see www.galveston.com/harbortours.

No need to wait for the zombie apocalypse. You can join San Antonio’s merry band of more than a thousand zombies in celebration of Halloween. Just watch the website www.sanantonio zombiewalk.com to find the date and time and be ready to shamble to the Alamo.

Since 2007, this Zombie Walk has assembled every type of zombie: big zombies, little zombies, red zombies, green zombies, zombies playing mariachi music. This is a highly informal affair, so you don’t have to sign up, pay an entry fee, or plan anything in advance except your outfit. Just show up and BYOB—bring your own brains. For more details, see www.sanantoniozombiewalk.com.

This family-friendly event near Abilene combines frontier heritage with ghost stories shared within buildings constructed between 1875 and 1925. By the light of a lantern, a guide details historical hauntings.

The hour-long trek, happening this year on October 15, October 22, and October 29, includes stories in the two most haunted buildings, the original Taylor County Courthouse and the Hill House, both of which have been investigated by paranormal investigators. Hill House’s ghosts show up most often to Buffalo Gap employees, we’re told. Belle, a daughter of a family who lived in the house, is said to haunt male staffers, leaving buttons behind on tools and in a guide’s pocket. A paranormal investigator who spent a night in the house with a recording device says he detected a male voice speaking—possibly Tom Hill, Abilene’s first city marshal, who built the home for his family in the 1800s. For more details, see www.tfhcc.com.

It’s Grapevine, so naturally your ghost tour will be infused with a little wine. Find out all about Grapevine’s ghosts with the Night Watchman Tour, which winds up with a glass of wine at Grapevine Springs Winery, one of 10 tasting rooms downtown.

But first, a 60-minute trek around the Main Street area introduces the city’s resident spirits: a librarian who haunts a bookstore, occasionally throwing books on the floor; a girl in a red dress who appears at a funeral home; a woman who ran over her husband at a garage that’s now Wilhoite’s restaurant.

You’ll learn other Grapevine lore, as well, including the legend that Bonnie and Clyde visited Grapevine (though they never robbed a bank there), and the story of train robbers who had a falling out in 1890 and wound up dueling. Both robbers’ bullets missed, and nobody ever saw either of them again.

Perhaps scariest: the story of the Victorian-style house built in 1896 at 224 E. College St., now occupied by Renata Salon & Day Spa. The resident ghost has been known to splatter red nail polish on the floor overnight. One former tenant says he once found a toy soldier in the attic and took it downstairs, only to find it back in the attic the next day.

Want an even more wine-infused journey downtown? The Hallow-Wine Trail includes three wine and food samplings
at any of the spots on the Grapevine Winery Trail. There’s nothing about ghosts on this tour, but it’s highly spirited. For more details, see www.grapevinespringswinery.com and www.grapevinewinerytrail.com. 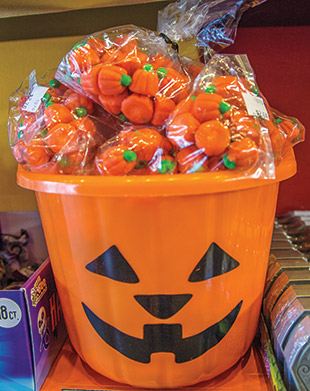 It’s easy to get lost in Halloween at this family-friendly attraction in Hondo, west of San Antonio. For 15 years, farmer Ken Graff has carved out a maze within seven acres of hay-grazer sorghum. Grown for cattle feed, sorghum resembles corn, but it’s taller and denser, making for a better maze. If you visit at night, buy a glow stick in the gift shop to help guide the way. Pick up a list of clues before you enter the maze to help you decide which way to go.

When you’re through exploring the maze, hop on a tractor-pulled, covered hayride. Then head down a man-made slide, watch pig races, pet goats, go for a pony ride, or fire an apple cannon at a target. If kids have any energy left, they can burn it off by bouncing on large jumping pillows.

Scary movie fans, this one’s tailor-made for you. Austin’s Alamo Drafthouse and Do512 have put together a weekend that combines frightful films with the perfect setting: a weekend camping experience at Camp Champions in Marble Falls.

The key feature of Camp Brewhaha Halloweekend is, of course, scary movies, including all-night marathons of horror movies on Friday and Saturday night. You’ll also enjoy a Halloween dance party with a costume contest and other Halloween events. The price of a ticket includes your cabin, meals, activities, concerts, and films, along with an open bar, plus camp activities such as swimming, volleyball, arts and crafts, archery, canoeing, kayaking, and bonfires. And, naturally, since this is an Austin-organized Halloween event, you’ll hear live music. It’s an adult weekend, for sure. Park the kids.

Halloween on the river

On the banks of the Colorado River between Austin and Bastrop, you’ll find the “Pumpkin Patch and Corn Maze at Barton Hill Farms,” a fall weekend attraction that beckons you to stay all day to enjoy its broad variety of activities for both adults and children.

Six acres of drought-resistant corn are mowed into two mazes that change design every year to challenge your sense of direction. The mazes also offer clues for navigation, and there are easy-to-find exits when you want to move on to other fun.

Kids will revel in the pirate-ship-shaped sandbox, then head for the 6,000-square-foot jumping pillow to bounce to their hearts’ content. Don’t forget the train, with cars crafted from 55-gallon drums and painted to look like cows. A barnyard offers the chance to feed sheep, goats, and pigs. Hungry? Chow down on offerings from some of Austin’s most famed food trucks. Adults can enjoy beer and wine, as well as live music. For more details, see www.bartonhillfarms.com.

Thrill your family by visiting one of Texas’ theme parks during the Halloween season. Arlington’s Six Flags Over Texas hosts Fright Fest, with activities for all ages, including a street party with ghouls and zombies, a kids’ costume party, and trick-or-treating with Looney Tunes characters.

At night, visit the 3-D Cirkus Berzerkus and the Cadaver Hall-Asylum – a frightful circus and nightmare doctor’s office. Of course, zombies are all over the place, and they often break into song and dance. Feel like doing the same? Scary-Oke allows you to frighten your fellow visitors with karaoke. 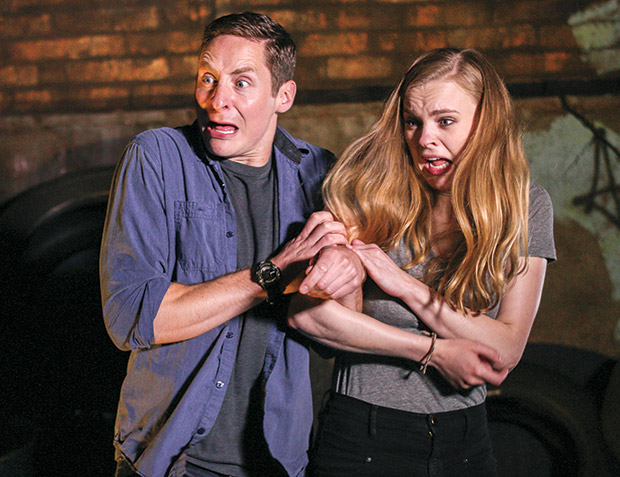 (Photo courtesy of House of Torment)

For adults and teens, there’s nothing like slowly inching your way through a haunted house, wondering when something—or someone—will suddenly scare your socks off.

Austin’s House of Torment grows frightfully bigger this year with a new location in a 40,000-square-foot warehouse on Ridgepoint Drive, two miles from its former Highland Mall venue. A year-round escape room (you’re locked in and have to figure out how to get out) and a Scare Store gift shop will join the animatronic monsters and more than 100 frightening actors who’ll make you feel like you’re in your own scary movie. Last year’s House of Torment included Laughterhouse (clowns take over a slaughterhouse, strengthened by your screams), and an island of witches led by a pumpkin demon.

Houston’s Screamworld offers experiences such as a maniacal maze, a high-tech swamp, and a morgue, along with zombies, and, of course, pitch-darkness. Expect scary touches like chainsaws, snakes, and alligators.

And don’t forget the year-round Haunted Mayfield Manor in Galveston, 12 spine-tingling rooms that make the most of darkness, things that go bump in the night, and scary sounds like … a haunted vacuum cleaner? Oh, yes. For more details, see www.houseoftorment.com, www.screamworld.com, and www.hauntedmayfieldmanor.com.

Let’s take a break from tricks and delve into the great treats you can find in some of Texas’ retro candy stores, whether you’re looking for goodies to toss into little goblins’ bags or something for yourself.

If you’re Halloween-ing in Galveston, check out La King’s Confectionery for lollipops shaped like eyeballs, pumpkins, and candy corn. La King’s also offers cookies decorated with skulls and pumpkins, as well as festive bags decorated with pumpkins and ghosts, filled with seasonal saltwater taffy, including pumpkin-flavored. 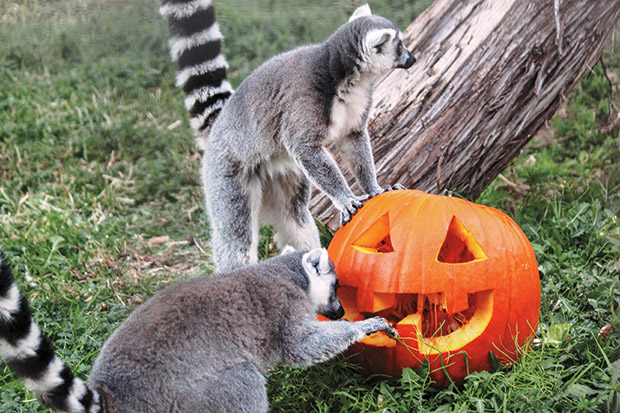 Animals can join in the Halloween fun, too, as Texas zoos present their seasonal events. In Fort Worth, Boo at the Zoo includes trick-or-treating, a pumpkin-decorating contest, a live animal stage show, a pumpkin patch, and chats with zookeepers.

At The Amarillo Zoo’s Boo at the Zoo event, you’ll find costumed animals (two-legged ones; the real animals get to wear their fur) handing out candy. Enjoy eye-popping sights such as a skeleton of the world’s largest frog (the size of a dinner plate) and art created by giant cockroaches and rats. Get your picture taken with Sasquatch, join the costume contest, and try a game of Pumpkin Putt Putt Golf or Batty Bat Toss.

Zoo Boo at the Houston Zoo offers trick-or-treating, music, animal-themed candy stations, and a costume contest. Pick up a small pumpkin to decorate, learn to dance like a zombie, and help create a monster mural. For more details, see www.fortworthzoo.org, zoo.amarillo.gov, and
www.houstonzoo.org.

Off the Beaten Path

Some of Texas’ small towns turn out to be extra ghostly. In East Texas, the Jefferson Ghost Walk, a two-hour-long walking tour, happens Fridays and Saturdays year-round. You’ll visit such wonderful haunts as the Jefferson Hotel, opened in the late 1800s as the Grigsby Hotel, where for many years guests have heard strange noises, experienced cold spots, and reported apparitions of people dressed in 1800s attire.

If that’s a shade too intense for your family, head out to the Hill Country for the town of Comfort’s annual Scarecrow Invasion. Erected by both individuals and businesses, dozens of scarecrows pop up all over town, making for a great afternoon’s driving tour. For more details, see www.jeffersonghostwalk.com and www.comfortchamber.com.