Splash into adventure with a Highland Lakes holiday

Memories old, new among the hills and lakes of Central Texas 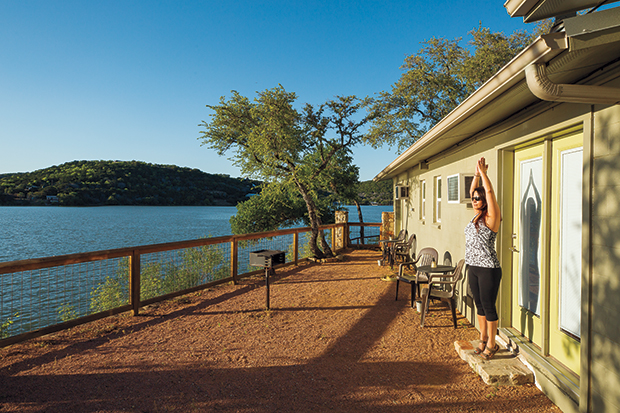 The Hill Country around Lake Buchanan and Inks Lake is one of my favorite parts of the world. As a child, I had family that lived in the community of Buchanan Dam, and I spent many fun-filled summer days with them. Catching my first fish with Grandpa, seeing the Milky Way at night, and eating sweet, juicy watermelon before jumping into the refreshing waters of the lake all stand out as favorite memories.

The area’s natural beauty made a lasting impression on me. Like a string of gems, a series of six sparkling lakes on the Colorado River runs through the wooded hills and granite outcrops of the Llano Uplift. The lakes range from the enormous expanse of Lake Buchanan, where boat wakes swirl like frothy white icing on a blue cake, to the small and serene Inks Lake and family-friendly Lakes LBJ and Marble Falls. With all of the water and hills, this area offers so many things I love to do, such as hiking, camping, and dining.

After too much time away, I recently took a weekend road trip down memory lane, starting from my home in Austin. I stopped for an early dinner in Marble Falls at The Enoteca, the companion wine bar and restaurant to Flat Creek Estate Winery. Flat Creek’s vineyards occupy 80 scenic acres outside of town, producing a variety of wines since 2000. A tour of the vineyard several months earlier had sparked my curiosity about The Enoteca. Its Italian-inspired dining room sports brick walls, a tasting bar, and marble-topped wine barrels for tables, adjoining an open kitchen and wood-fired oven. I devoured a margherita pizza with ripe tomatoes, basil, and fresh mozzarella, accompanied by a glass of Flat Creek’s dolcetto, a refreshing dry red wine made from Texas High Plains grapes.

After dinner, I drove north to Burnet and then followed Lake Buchanan’s hilly east shore for 15 miles on twisting, turning Ranch Road 2341 to my lodging for the night. The extra effort was well worth it for the peace and quiet of Painted Sky Inn, where I relaxed by a fire pit overlooking a wide, tranquil inlet on Lake Buchanan. As water lapped gently at the shore and the sky turned black and littered with stars, Denise Lewis filled me in on her yearlong transformation of the inn. A former Austinite, Lewis bought this then-dilapidated property in 2010, charmed by its potential. She renamed the inn for its colorful sunsets and completely remodeled the place, turning it into a waterfront getaway with 11 rooms, RV sites, a fishing pier, playground, boat ramp, and canoes, kayaks, and stand-up paddleboards.

The next morning I made a hearty breakfast in my room’s full kitchen to fuel up for a visit to Reveille Peak Ranch, a 1,350-acre property catering to mountain bike riders, trail runners, and obstacle-course racers. An Austin friend of mine, Lee Klancher, regularly comes here for what he calls exceptional mountain biking, so I stopped by to see for myself. The ranch offers overnight camping for riders and runners (as well as for scouting, educational, and corporate groups), including six full RV sites and more than 200 primitive camping sites with access to restrooms and hot showers. 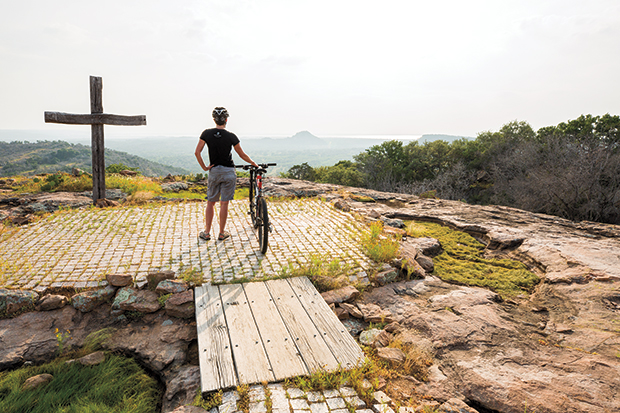 “Many of my biking friends say Reveille Peak is the best riding in Texas. The views from the high points are one of my favorite things,” Klancher said. Routes range from mild to challenging, including rough single track with ledges, rocky areas, and plenty of ups and downs. With some 62 miles of trails—including a new 25-mile non-intersecting endurance loop that’s suitable for beginning mountain bikers and trail runners—the ranch offers ample space for long rides without repeated terrain.

I came just to watch, first loitering beneath the covered pavilion as packs of riders headed out. Then I climbed to the observation deck on the pavilion roof for a panoramic view. The Llano Uplift, which stretches across three counties within the Hill Country, is an exposed island of Precambrian igneous and metamorphic rock that is more than a billion years old. In the late 1880s, the state quarried the distinctive Texas “sunset red” granite from this area to build the Texas Capitol.

Once the riders disappeared into the rugged hills, I headed to nearby Inks Lake State Park to explore a series of trails—Devil’s Waterhole, Valley Spring Creek, and the Devil’s Backbone Nature Trail. These trails wind about 1.75 miles past the park’s popular swimming hole, through wooded areas, and around Spring Creek to a bird blind.

After such a hike, it’s hard to resist the siren call of a chili dog and root-beer float at Sweet Marley’s, next door to the state park store. Founder Jonathan Bedford named his food trailers after his daughter, who loves frozen yogurt (his business operates a second trailer at Enchanted Rock State Natural Area and a snack bar at Longhorn Cavern State Park). The all-beef hot dog came piled with chili and cheese, and the float combined A&W Root Beer and Marley’s beloved soft-serve yogurt, making it creamy and ready to drink. The combo is a most excellent way to refuel.

While none of my Highland Lakes childhood memories include wine, a growing number of vintners are staking a claim in the region. Among them are Karen and Blake DeBerry of Torr Na Lochs Vineyard and Winery. In 2004, the DeBerrys bought 180 acres overlooking both Inks and Buchanan lakes, intending to build their retirement home. In 2011, the couple visited the Margaret River wine region in southwestern Australia and noticed the area’s similarities with their land. Karen enrolled in Texas Tech University’s Viticulture Certificate Program, and after two years of preparation, the DeBerrys planted their first grapevines in April 2014. The DeBerrys cleared plenty of granite to make way for their vineyard and incorporated the rock into Torr Na Lochs’ production facility and tasting room.

With a high ceiling and roll-open doors, the tasting room feels like part of the outdoors and takes full advantage of the mesmerizing views, as does the outdoor patio. Torr Na Lochs’ name comes from Gaelic for “hill over lakes,” and to my right I could see the broad surface of Lake Buchanan and its massive dam; to my left, a blue smidgen of Inks Lake. All around, the blooms of sage and wildflowers mixed with expanses of colorful granite. It was a terrific backdrop for a wine tasting. Two of my favorites were the light, crisp rose and the spicy Fion Dearg (Gaelic for red wine). 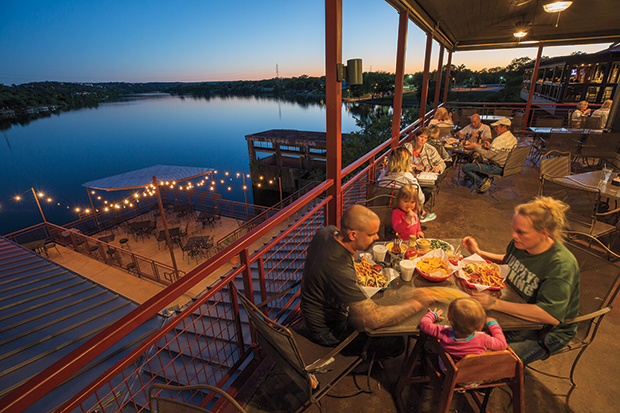 The afternoon sufficiently whiled away, I headed back to Marble Falls for dinner at River City Grille, which literally overhangs Lake Marble Falls. Its extensive menu covers the waterfront, pun intended, with seafood, steaks, chicken, burgers, tacos, salads, and sandwiches, all emphasizing fresh ingredients and drawing on family recipes. I had a thick, juicy pork chop, marinated and grilled with a flavorful dry rub and served with fresh green beans and creamy mashed potatoes. A big square of homemade carrot cake topped off the meal.

After another restful night at Painted Sky Inn, the next morning I drove about 10 minutes to the departure point for the Vanishing Texas River Cruise. Back in the early 1980s, I went on one of the first Vanishing Texas River Cruise outings up the Colorado River on the north end of Lake Buchanan. I am happy to report that it hasn’t changed much since then. Longtime Captain Shawn Devaney, who may well have steered the double-decker boat on my first trip, motored away from the dock at 11 a.m. for our 22-mile round-trip excursion. 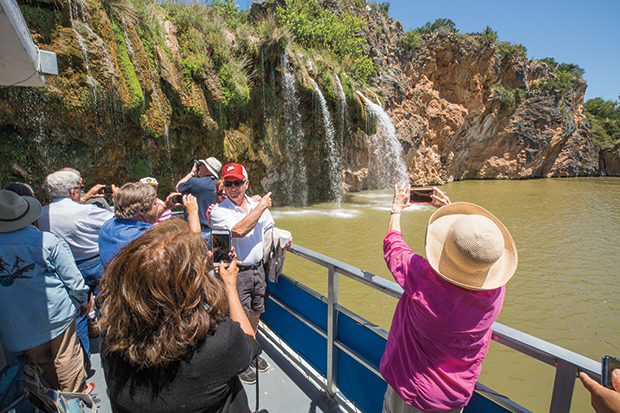 As we passed waterfalls, rocky limestone cliffs, and wooded slopes, tour guide Tim Mohan recounted the area’s history, including the fact that bison, mountain lion, ocelot, and jaguar used to roam these now-flooded canyons, as did hundreds of wild Longhorn cattle. In the 1750s, Mohan said, the Spanish worked three silver mines along the river, tipped off to those deposits by Lipan Apaches. Tonkawa and Comanche tribes once called this area home as well. The cruises are best known for the sightings of bald eagles that winter along the lake from November to March, but tours happen year-round and cruisers can enjoy plenty of other wildlife. We spotted feral hogs slipping through the trees, pelicans squatting on the shore, and stately blue herons flying alongside the boat.

To stretch my legs one last time en route back to Austin, I took country roads out of Marble Falls to the Doeskin Ranch Unit of Balcones Canyonlands National Wildlife Refuge. The unit offers more than 5 miles of hiking trails, and I chose the Creek Trail, six-tenths of a mile across fields, through woods, and alongside a clear gurgling creek. The trail also passes vestiges of the land’s former life as a ranch, including a corncrib, corrals, and rock fences. Balcones Canyonlands is a favorite of birders because it attracts a variety of species, including nesting summer tanagers, red-eyed vireos, and its most-famous residents, black-capped vireos and golden-cheeked warblers. Alas, the birds hid from view during my short hike, but I could hear their chirping across the refuge’s isolated silence.

My Highland Lakes weekend contained a nice mixture of old favorites and new discoveries, and it warmed my heart to see that this patch of Texas remains as beautiful as ever. I almost felt like a carefree kid hanging out with my grandparents and cousins once again. A weekend doesn’t get much better than that.