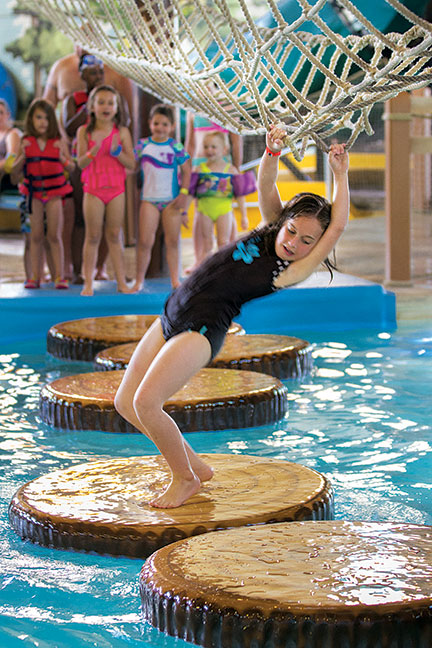 Let’s just say it had been a long day in the driver’s seat, and patience was wearing thin. Each summer, we make the drive from Texas to Minnesota to visit my family, a two-and-a-half-day endeavor each way, only manageable with a stack of Scooby Doo movies for my young children and plenty of snacks

On our last return trip home, by the time we crossed the Texas state line we needed a restorative break—big time—and the adults needed wine.

Luckily, I knew just where to go to give passengers of all ages (me, my mom, and my kids) just what we needed—food, fun, and a place to cool down.

Our timing was fortuitous, as our visit fell during Grapevine’s SummerBlast, an annual festival that runs from Memorial Day to Labor Day (this year marks the sixth). Festivities include loads of water park fun, gallery hopping in the historic downtown, and Friday evenings that end with fireworks over Lake Grapevine. One of the best spots to watch the display is from the rooftop of The Gaylord Texan Resort, so that’s where we settled in.

The resort’s own summer events (called Summer Bash) include culinary activities and a music series featuring the Walton Stout Band, Empire 6, and the David Whiteman Band in the lineup. The swanky property overlooks Lake Grapevine and brims with Texas design swagger (including a ranch-style lobby with comfortable leather couches and a large limestone fireplace). Its awe-inspiring glass atrium is like a mini theme park, with four-and-a-half acres of geographically themed sections—from San Antonio’s River Walk to Palo Duro Canyon—that include pretty indoor gardens, winding waterways, shops, and restaurants. Our first priority was refueling, so the adults sipped a glass of Prosecco before settling into a tangle of seafood pasta at Zeppole Coastal Italian restaurant.

We’ve never met a lazy river that we didn’t like, so the primary draw of the Gaylord for both my kids and me was Paradise Springs, a 10-acre, Western-themed pool and lazy river complex—complete with a town façade housing the snack bar and a windmill by the pool, along with fire pits and a game pavilion—exclusive to hotel guests. For most of the following day, we drifted and bobbed, raced down the winding, 27-foot-tall water slide, ate ice cream, sipped frozen margaritas, and soaked up the sun, which feels much more manageable from a poolside chair with a lively soundtrack of Robert Earl Keen and the sound of rushing water. We had fun watching teens line up for the zipline that extends over the vast swimming area. After wearing ourselves out, two horseshoe-shaped hot tubs were the perfect spot to recover before catching the hotel shuttle, which conveniently transports guests between the lobby and Paradise Springs.

Just across the street, Great Wolf Lodge offers its own water fun and kid nirvana. The last time we were there, we loved being sprayed and soaked from every angle in the four-story Fort Mackenzie (a maze of suspension bridges, slides, and swinging nets), the Coyote Cannon water slide, and the River Canyon Run, which allowed us all to pile into one raft for a white-knuckle ride. There’s also plenty of fun to be had inside the Northwoods-themed resort—kids can grab a programmed wand, follow a map that has them racing up and down on the stairs between floors, and battle a dragon in MagiQuest. My daughter opted for an ice cream-themed manicure in Scooops Kid Spa. I love Great Wolf’s bedtime ritual: Kids of all ages gather in the Grand Lobby, most of them in their pajamas, for nightly fireside Story Time read by the hotel’s animal characters (my kids liked Violet the Wolf).

We devoted our second day to exploring Grapevine, which revolves around its historic downtown. Grapevine’s story dates to 1843, when General Sam Houston and representatives of the Republic of Texas negotiated a treaty of peace with members of 10 Native American nations. They convened at Grape Vine Springs, also known as Tah-Wah-Karro Creek. The resulting document, the “Treaty of Bird’s Fort,” opened the area to settlements. Within a year, the first homesteaders began arriving in covered wagons and populating the Grape Vine Prairie. Originating under the Lone Star flag in 1844, a year before Texas became a part of the U.S., Grapevine is the oldest settlement in Tarrant County.

Its location (between Dallas and Fort Worth, and just five minutes from DFW International Airport) has helped Grapevine flourish, and has made it a favorite meeting spot for families, girlfriend and couples’ getaways, and conventions. Part of the city’s appeal is its devotion to preserving its history via year-round programs and preservation efforts. As a result, refurbished downtown venues such as the buildings along Historic Main Street, the Glockenspiel Clock Tower (where two animatronic train robbers have a “shoot-out” four times each day), historic Nash Farm, and the Settlement to City Museums enhance and remind visitors of the town’s unique heritage.

One of its biggest draws (especially for my five-year-old son) is the Grapevine Vintage Railroad. The nostalgic railroad is serviced by two Victorian-style locomotives, including “Puffy,” an 1896 steam locomotive that is the oldest continuously operating steam engine in the South, and “Vinny,” a 1953 GP-7 diesel locomotive. The regular route to the Fort Worth Stockyards (a 21-mile stretch that rolls at a leisurely pace) departs Fridays, Saturdays, and Sundays from the Cotton Belt Depot at 1 p.m. On Saturdays and Sundays, passengers can participate in a not-so-scary train robbery, helping deputies corral the “bandits” that are trying to rob the train. 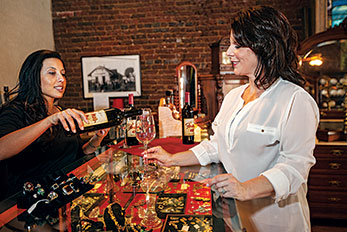 Named for the wild mustang vines that once flourished in the area, Grapevine prides itself on an abundance of locally-owned restaurants and the many wine-tasting rooms that showcase varietals produced in and around North Texas. My favorite restaurant, and the one that seems to be the bustling lunchroom of the community, is Main Street Bistro and Bakery. The menu includes about anything you’d want for breakfast or lunch, including freshly baked pastries and coffee drinks, fancy layer cakes, well-executed sandwiches (try the crispy smoked turkey panini), an array of fresh salads, and wines by the glass. We shared the Croque-Madame (a griddled sandwich of smoked ham with gruyère, Mornay sauce, and topped with a
fried egg) and a bistro salad of field greens, feta, kalamata olives, cucumbers, tomatoes, onions, pine nuts, and lemon vinaigrette.

For dinner, we loved the cozy outdoor patio, richly colored polished wood interior, and menu of Italian classics (salads, juicy steaks, lasagna) at Farina’s Winery and Café. We went with the local favorite, the signature spaghetti pizza, because who doesn’t love some carbs with their carbs? A crispy thin crust is topped with tomato sauce, spaghetti, meatballs, and cheese that meld together in the oven. The
result is as rich and satisfying as it sounds, and is definitely complemented by a glass of Chianti (the lengthy wine list features both local and global varietals).

For art lovers, particularly those partial to cowboy portraits, the Great American West Gallery is an essential stop. Housed in a former bank and newspaper building (declared a Texas Historic Landmark in 1986), the stylish gallery is devoted to the legacy of the American West and specializes in paintings and bronzes depicting Native Americans, frontiersmen, cavalry, pioneers, and expansive landscapes.

As the light fades, it’s hard to miss the Palace Arts Center, with its radiating neon sign. The beautifully restored Art Deco-style theater, listed in the National Register of Historic Places, was built in the 1940s and saved from demolition by the Grapevine Heritage Foundation. Its calendar of classic movies and live music, plus freshly popped popcorn, provides the opportunity to relive downtown’s turn-of-the-century atmosphere. This summer, check out The Grapevine Opry Show, a family-friendly production on Saturday nights featuring country music, rock-and-roll, comedy, and dancing. The regular cast will be joined each week by some of the best local talent in North Texas. From July 29 to August 2, the enchanting, Dallas-based Theatre de Marionette will be performing Hansel & Gretel with extraordinary handmade puppets. 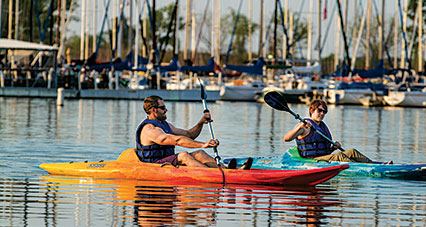 It was time to return to the hotel, but the fun wasn’t over. The perfect end to a SummerBlast adventure is the fireworks over Lake Grapevine, an 8,000-acre freshwater lake. The lake was created in 1952 when the U.S. Army Corps of Engineers built Grapevine Dam on Denton Creek, a tributary of the Elm Fork of the Trinity River. These days it’s a haven for boating (complete with two marinas), water-skiing, wind surfing, fishing, camping, and picnics. With miles of rolling shoreline and wilderness trails, it’s one of the best hiking and biking destinations in the Dallas/Fort Worth area. If you’d rather cruise the trails and simply take in the lush landscape, try buzzing around on a Segway from Grapevine Segway along many of the paths around the lake.

Over the crack and fizzle of fireworks, with tired kids in my arms, it felt like we’d savored a few days of Texas summer in just the right ways. And we had the tan lines, full bellies, and happy memories to prove it.