Padre Island, the longest barrier island in the world, embodies some of the state’s most pleasurable assets, entertaining Texans with miles of warm Gulf waves and sun-drenched, cinnamon shores. Whether your travel time to Padre is 10 minutes or 12 hours, most Texans have made the pilgrimage at least once, if not annually, negotiating the state’s highways for the quickest route to the island’s sand and surf.

Padre Island: Past and Present

Note that shipwrecks within Texas waters are protected and salvaging artifacts is unlawful. Find information at www.thc.state.tx.us/project-review/antiquities-code-texas.
Following is contact information for sites in the story.

Here, along a seemingly infinite stretch of coastal environs from Corpus Christi to Port Isabel, worries drift away like flotsam before vanishing completely beyond the Gulf’s blue horizon.

But our coastline is also a paradox, the final destination for centuries of travelers who, due to storms or just plain bad luck, ended up washed ashore, their own precious assets lost beneath the waves. Dozens of ships have sunk along the Padre Island coastline over the last 400 years, among them a Spanish treasure fleet sailing from Veracruz, Mexico, to Spain by way of Havana, Cuba.

On April 9, 1554, the San Esteban, Espíritu Santo, Santa Maria de Yciar, and the San Andrés sailed out of a port near Veracruz together as a flotilla, beginning a routine voyage that usually took around five months to make. Among the passengers and cargo were returning Spanish conquistadors, European merchants, the Dominican friar Marcos de Mena, around 22,000 pounds of cochineal (the brilliant red insect extract used in dying fabric), and approximately 91,000 pounds of precious metals bound for the treasury of Charles V, the king of Spain. Charles was more than just the Spanish monarch: His titles included King of Sicily, Naples, the Duchy of Milan, and the New World Colonies, and the Holy Roman Emperor, making him one of the most powerful men in the world.

But a mere 20 days after setting sail, all but the San Andrés would founder off Padre Island, wrecked by a sudden storm. While the San Andrés and its portion of the treasure made it to the Havana harbor, the remaining 87,000 pounds of gold and silver sank just off the coast near the present-day Mansfield Cut, a channel originally dredged in the 1950s through Padre Island, across the Laguna Madre from the modern fishing village of Port Mansfield.

Today, the Mansfield Cut—the nearest known landmark for the wrecks—can be accessed by boat or by driving to South Padre Island, then up the beach on a 28-mile trek from Beach Access Road No. 6. Be advised that the route requires a high-clearance, four-wheel-drive vehicle and the skills to drive on wet and dry sand, and should only be attempted at low tide. During high tide, sections of the route are often underwater. The drive offers remote access to the South Padre Island environment, including views of the dune habitat where salt- and sand-loving plants decorate the landscape with bright blooms, sea oats, and stiff, drought-resistant ground cover. Should you arrive at the Cut on the weekend, you’ll often find the massive granite boulders lining the dredged channel fully occupied by beachcombers, campers, birdwatchers, and anglers pulling in Gulf species swimming in and out of the Laguna Madre. 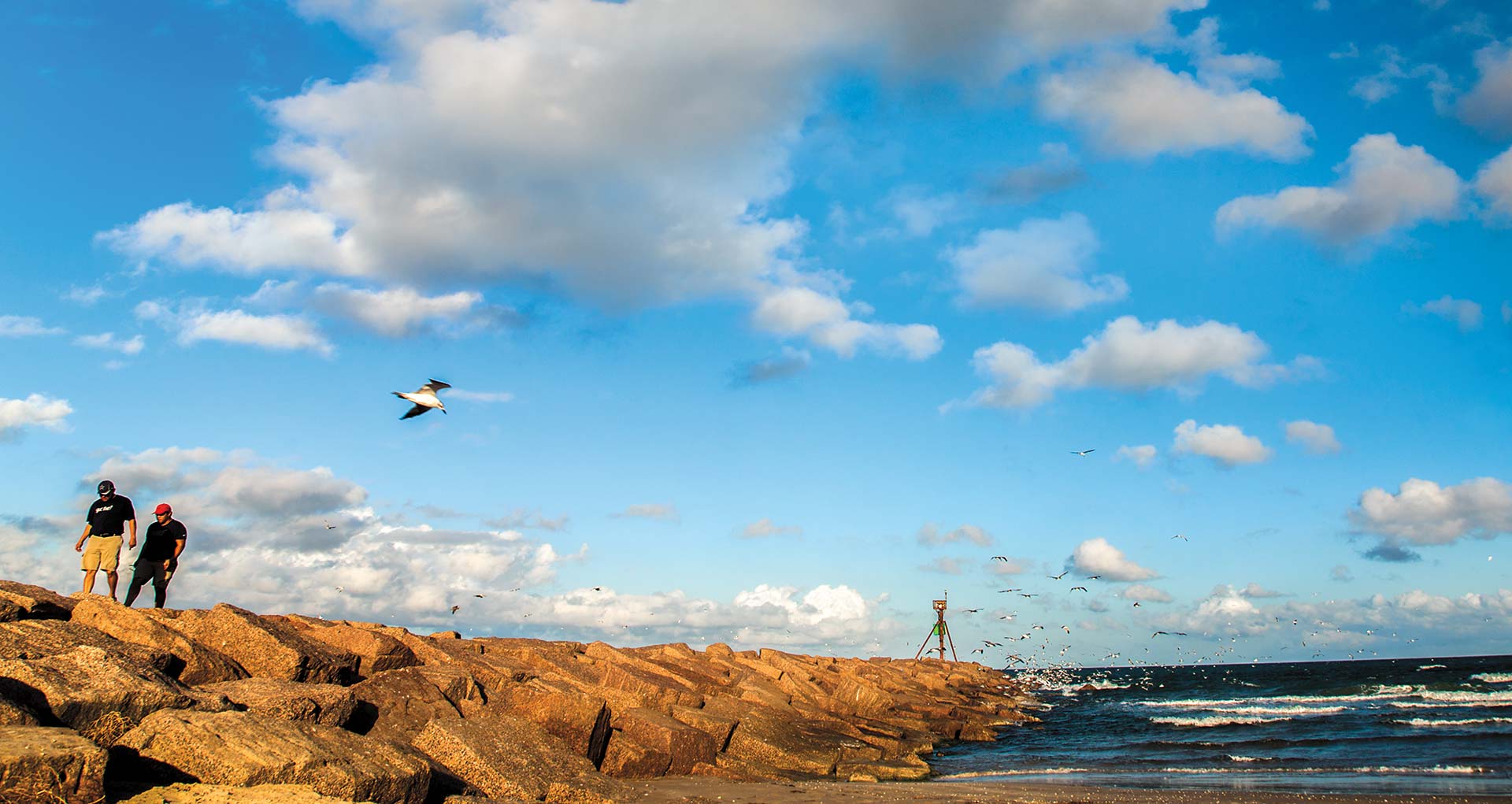 Although approximately 300 people comprised the total passenger lists for the wrecked ships, blown off course by the storm and into Padre’s relatively shallow coastline just offshore, it’s believed that fewer than half of the passengers made it to land. The rest drowned. A small band of survivors, likely the sailors in the group, made their way to Veracruz, most likely in a salvaged launch boat, to report on the disaster.

Some survivors set off on foot for an ill-advised trek south along the beach, believing that civilization, fresh water, and safety were near. Instead, they died in quick succession, overtaken by members of the local native population who pursued them down the coastline. Only two survived, according to an account from Fray Marcos de Mena published after his death. Fray Marcos, wounded by arrows and left to die, found his way nearly 500 miles south to the mission village of Tampico. A soldier named Francisco Vazquez reportedly managed to escape, making his way back to the beach near the wrecks, surviving in the dunes until a Spanish recovery ship rescued him.

We know a remarkable amount about the ships’ cargo, as salvage efforts began within two months of the wrecks. A Spanish salvage crew was sent as soon as news of the shipwrecks arrived in Veracruz. Six other salvage vessels hovered over the wreck site for three months beginning in July of 1554. The San Esteban may have marked the spot, lying in water shallow enough that its masts remained above the water line. Records of the salvage effort estimated that more than 35,000 pounds of the Crown’s treasure were recovered.

Salvage efforts began again in the 1960s and have since aided in archiving a portion of the shipwrecked treasure, providing a look at Spanish sea travel and the 16th-Century way of life. Salvagers and marine archeologists have recovered thousands of artifacts, including cannons, gold ingots, silver disks known as planchas, glass bottles, silver coins, navigation instruments, and personal items. The Corpus Christi Museum of Science and History displays many of the artifacts, and also spotlights another famous Texas shipwreck, the French La Belle, which sank in Matagorda Bay in 1686, part of explorer René-Robert Cavelier, Sieur de La Salle’s ill-fated expedition. 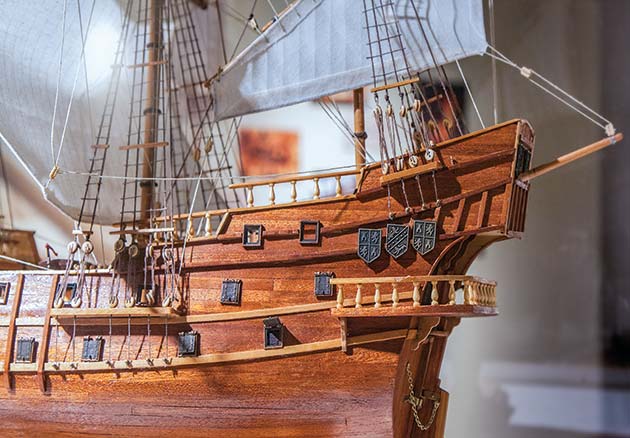 The museum is located just under the Harbor Bridge in the heart of Corpus Christi’s downtown “SEA” District, where the city’s sports, entertainment, and arts thrive. While here, try Brewster Street Icehouse, a restaurant and pub featuring live music every Thursday night, where, in addition to grilled seafood platters and tacos, a selection of hamburgers includes “The Brooks Kieschnick,” a burger and trimmings loaded into a fresh tortilla. Just south of the SEA District, you’ll also find fine, fresh seafood dining at one of several restaurants located on nearby Peoples Street T-Head, home to the Selena Memorial and Harrison’s Landing, which has a lively waterfront bar and restaurant afloat alongside the city’s marina. After your meal, take a leisurely stroll along the bayfront via the city’s dedicated hike-and-bike path, a traffic-free paved walkway that parallels the shoreline, taking detours into several Corpus Christi public parks.

For further immersion into the history of the Spanish treasure fleet, particularly the San Esteban, you’ll want to follow the coastline about 170 miles south to Port Isabel, quiet sister to the popular South Padre, located just across the Queen Isabella Causeway. Port Isabel’s Treasures of the Gulf Museum, part of a three-museum complex located a few blocks from the city’s downtown historic district, helps tell the entire shipwreck story through a permanent exhibition of multimedia displays and salvaged artifacts.

The museum has created a comprehensive chronology of the shipwreck period starting with a general overview of the Spanish empire and ending with a detailed account of the treasure fleet’s fate. A video of the 1970s salvage operation illustrates the recovery of the many artifacts now in the hands of state curators and on permanent exhibition. Included at the Treasures of the Gulf Museum are silver coins, a cannon ball and cannon, a swivel gun, and a hull spike, all recovered from the San Esteban. Of particular interest is the museum’s silver plancha, a rough round ingot of precious metal, from the San Esteban’s treasure cargo. In order to ship quantities of silver across the oceans, 16th-Century smelters would melt down the metal and pour it into depressions they made by hand in the sand. Once cooled, the crude disks of silver could be easily loaded and stored in the ship’s hull for the voyage. Upon arriving at their destination, the disks (or plates) of silver would then be re-smelted and made into coins, jewelry, and other treasure, much like the ingots of gold that often accompanied them in transport.

After your museum visit in Port Isabel, it’s time to hit the beach, located just a few minutes’ drive across the causeway to South Padre. Public beach access points are located every couple of blocks off Gulf Boulevard, South Padre’s easternmost thoroughfare, or from one of the county beach parks along Padre Boulevard, the island’s main roadway. Once settled into your beach chair, dangle your feet in the waves, and take a moment to revel in the warm breeze and bright Gulf skies. Shade your eyes, cast your gaze up the coast toward the Mansfield Cut, then consider that of the 87,000 pounds of silver and gold carried by the three Spanish ships, less than half has ever been recovered. Somewhere, out there, thousands of pounds of 16th-Century treasure still remain, undiscovered, at the bottom of the sea.