Catch the coach for a different take on tourism 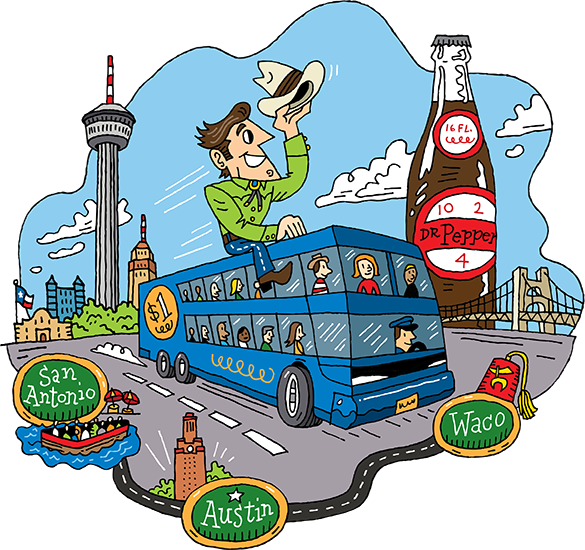 My first trip on a Greyhound bus wasn’t planned. In western New Mexico, my aging sedan had broken down, and the mechanic said the delivery of parts and repair would add up to a week out of commission. I left him the car keys, caught a ride to the flea market that served as the Greyhound stop, and boarded a bus bound for Flagstaff to wait out the repairs.

That unexpected bus trip and several others in the following years formed my initial impressions about regional bus travel as a slow and uncomfortable option that was rarely preferable to driving. I discovered recently, however, that bus carriers have been working to overcome those negative impressions and build ridership with improved service on regional routes.

Last year, Megabus launched service in Texas, and Greyhound Lines, Inc.,  introduced Greyhound Express service to the state. Both companies offer non-stop service between Dallas, San Antonio, Houston, and Austin with amenities like reserved seating, free wi-fi, power outlets for each seat, and a tad more personal space than older buses. Both companies also offer $1 tickets, if you buy them well in advance.

My interest piqued, I scheduled a couple of sightseeing trips to experience how bus travel measures up for tourism in a state as vast as Texas. I saw potential in the fact that many bus stations are located downtown, within walking distance of museums, local public transit hubs, and lodging. Consider Brownsville, El Paso, and Dallas, to name a few examples.

My first tourism bus venture was a daytrip between Austin and San Antonio, where both the Greyhound and Megabus stops are blocks from the Alamo and the River Walk. For $9.50, I booked a Megabus round-trip ticket online, about 19 hours before my departure. I caught the double-decker bus at the University of Texas campus for an 85-minute ride to San Antonio, where we disembarked at a parking lot at the corner of Fourth and Broadway streets.

I walked south on Broadway and in five blocks found the city Visitor Information Center, which sits across the street from the Alamo. Along with spacious public restrooms, the visitor center offers a bounty of tourist brochures and maps, including information about local bus schedules and sightseeing tours. Outside the limestone building, there’s a rack of bicycles available for rent as part of San Antonio’s B-cycle bike-share program.

I spent an afternoon navigating central San Antonio and the River Walk by foot, checking out sights like William B. Travis’ wooden-handled straight razor at the Alamo; the Alamo diorama in The History Shop, complete with recorded narration by Phil Collins; colorful oil paintings at Little Studio Gallery in La Villita arts village; panoramic views from the 750-foot-tall Tower of the Americas’ observation deck; and tasty German sausages at the 1917
Schilo’s Delicatessen.

After about seven hours in San Antonio, I made my way back to the big blue Megabus at the parking lot at Fourth and Broadway. (I had taken the first of four daily trips that Megabus offers from Austin to San Antonio, and the last of four return trips.) I arrived at the bus 10 minutes before my 7:30 p.m. departure, just in time for the quick jaunt back to Austin.

I knew that Waco also held potential as a bus tourism destination, because the Waco Transit Center—home of the Greyhound station—is situated next to downtown. I decided to give it a shot, booking a round-trip Greyhound ticket online ($52.90, purchased nine hours before departure) for a daytrip between Austin and Waco. Greyhound offers five daily trips between the two cities. I snagged one of the last seats on the full bus from Austin—where the Greyhound station is located in a notably non-pedestrian friendly location on the city’s north side—and listened to music on my headphones as I watched the passing prairie hills and nearly uninterrupted roadside development along I-35.

From the Waco Transit Center at the corner of South Eighth Street and Mary Avenue, I strolled around downtown, admiring the 1902 McLennan County Courthouse, the 22-story ALICO building, which was the tallest building in the Southwest when it was built in 1911, and the 1870 suspension bridge that once served as a Chisholm Trail crossing over the Brazos River.

I also visited two Waco museums within a short walk of the bus station. The fascinating Memorial Masonic Grand Lodge Temple dives deep into Texas history and the Masons’ place therein starting with the inception of the Republic. Nearby, the Dr Pepper Museum, set in the 1906 building that served as Dr Pepper’s first bottling plant, displays a plethora of memo-rabilia celebrating the soft drink—and serves up ice-cream floats from the
soda fountain.

I wrapped up my seven-hour Waco visit at Mama & Papa B’s Bar-B-Que, a four-table joint that serves tasty meats swimming in sweet barbecue sauce. Full of brisket and sausage, I walked two blocks to the Transit Center. After a short wait—the people-watching at the bus station is fascinating—I hopped on a Greyhound Express bus with plenty of open seats. I stretched back in my chair, happy to rest my feet, contemplate my travels, and leave the stress of interstate driving to someone else.

For more information on visiting San Antonio and Waco, go to www.visitsanantonio.com and www.waco heartoftexas.com.