The Ballad of Brownsville 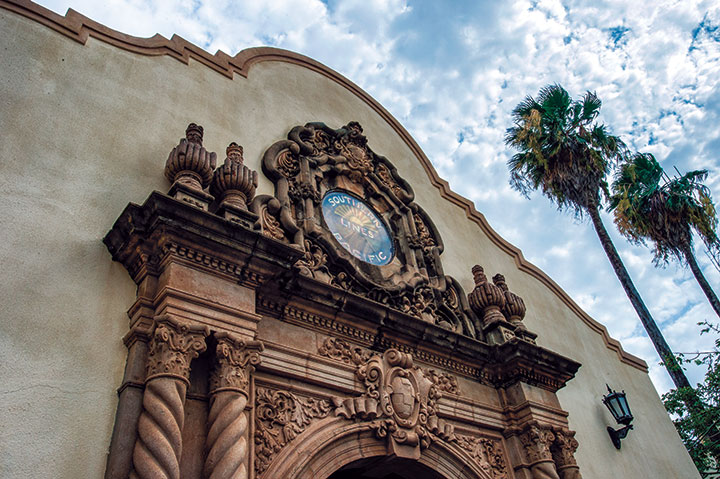 As a crossroads city at the southernmost tip of Texas—and the state’s closest point to the interior of Mexico—it’s fitting that Brownsville would have a memorable train station. The city’s Southern Pacific Railroad Depot, built in 1928 in the Spanish Colonial Revival architectural style, is a beauty.

Inside, galleries accented with tile and stenciled beams lead visitors through a walking tour of Brownsville history that can easily be managed in an hour.

Though the depot greeted its last passenger in 1952, you can still sense the presence of travelers from the past, as the distinctive structure today houses the Historic Brownsville Museum.

Architectural historians praise the old depot as a stellar example of Spanish Revival design, characterized by features such as ornate cornices and parapets. Cast-stone ornamentation—architectural elements made by pouring concrete into molds—adds elaborate detail to the building’s façade. Inside, galleries accented with tile and stenciled beams lead visitors through a walking tour of Brownsville history that can easily be managed in an hour.

The museum’s images and artifacts tell a story that starts around 1700, when Coahuiltecan Indians lived in the area. It continues with the mid-18th Century arrival of the Spanish, and then ventures into the 20th Century, when ribbons of steel brought the outside world—and more rapid development—to the Rio Grande Valley.

The Historic Brownsville Museum also chronicles the political turbulence of the Rio Grande Valley borderlands and the armed conflicts that unfolded here, including the Mexican War, which resulted in the founding of Brownsville. When the war first started in 1846, General Zachary Taylor moved his American troops to the north bank of the Rio Grande across from Matamoros, Mexico. The Americans established Fort Texas, which later became Fort Brown, and Brownsville grew up in the fort’s shadow.

A highlight of the museum’s Mexican War exhibit is the flag of the Mexican army’s Matamoros Battalion. Decorated with the customary eagle and snake of the Mexican seal, the flag flew at the Battle of Palo Alto, the war’s first major battle, held near present-day Brownsville, and also at the nearby Battle of Resaca de la Palma.

The last major clash of the Civil War, the Battle of Palmito Ranch, was also fought near Brownsville. Exhibits include a reproduction of an unsigned painting of the battle, as well as photographs of important figures, such as Confederate colonels John Salmon “Rip” Ford and Santos Benavides.

Images of soldaderas (female soldiers) represent the Mexican Revolution of the 1910s. The museum tells the stories of Valentina Ramirez, who dressed as a man to participate in battles, and Las Adelitas, who were female members of Pancho Villa’s forces. Another display features black metallic cones that were part of magician Adolf Dittmann’s stage act. Dittmann built Brownsville’s first movie house, the Dittman Theater, and filmed Revolution battles in Matamoros for newsreel services.

One large gallery hosts changing exhibits. In November, the museum celebrates Dia de Los Muertos with an exhibit done in partnership with the Mexican Consulate of Brownsville, says museum Director Maribel Guerrero. Along with an authentic Dia de Los Muertos altar, the exhibit showcases skeleton figures in Victorian dress—known as Las Catrinas—and includes presentations about the history and significance of the holiday. In February, the museum will host an exhibit featuring Brownsville’s annual Charro Days Fiesta (February 26-March 18, 2015), including outfits and sombreros from the first Charro Days held in 1938.

Images of a steamboat, a stagecoach, a trolley, and a train explore the history of Brownsville transportation, as does the Rio Grande Railroad Engine No. 1, the original, restored locomotive of the Rio Grande Railroad. Now housed in the museum’s Simon Celaya Building, El Trenesito, or Little Train, ran the 22.5-mile route from Port Isabel (then called Point Isabel) to Brownsville from about 1870 to 1928. The locomotive sat deteriorating for years near the Fort Brown Convention Center before it was restored and moved to the museum in the late 1990s, Guerrero says.

Brownsville’s history is too dramatic and colorful to be contained in just one museum, however. The Brownsville Historical Association also chronicles local history at the Brownsville Heritage Museum, Stillman House Museum, and other sites. The association’s Brownsville-21 Project, started in 2007 with a grant from Preserve America, has placed information kiosks throughout Brownsville’s historical areas, organized walking and multimedia history tours, and developed tours of the Old City Cemetery—both haunted and not.

Brownsville’s location on the Rio Grande, along with the turbulent development of the frontier borderlands, shaped the city’s storied past, says James Zavaleta, curator of the Historic Brownsville Museum. “You have a diverse array of people that came from Mexico, from Europe, and from other parts of the United States,” he says. “South Texas and Brownsville are really the merging of many cultures, and that interchange makes for a very unique cultural identity. This is especially evident in the city’s architecture and places like this museum building.”