The Fruits of Mission 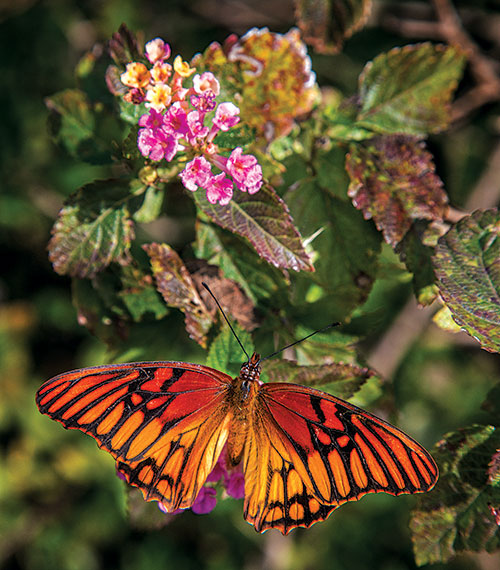 The beauty of Mission wasn’t lost on Tom Landry. In his 1990 autobiography, the legendary Dallas Cowboys coach reflected on his Rio Grande Valley hometown, where he’s now memorialized in a colorful downtown mural.

“There wasn’t a prettier smelling place on earth when the winds would waft the sweet fragrance of flowering lemon, orange, and grapefruit in from the great citrus groves stretching up and down the valley,” Landry recalled.

Long known as the “home of the grapefruit,” Mission has celebrated its agricultural roots since 1932 with the annual Texas Citrus Fiesta in January. But there’s more to Mission than its heritage of sweet citrus. The city also offers eco-tourism attractions, such as the World Birding Center at Bentsen-Rio Grande Valley State Park and the National Butterfly Center, and a fascinating history steeped in Catholicism, which is reflected at Capilla de la Lomita Historical Park.

On the south side of modern-day Mission, an owl’s hoot from the Rio Grande, the Missionary Oblates of Mary Immaculate built a small adobe chapel called La Lomita (“little hill” in Spanish) in 1865. The chapel served as a place of worship and a way station for Oblate Fathers riding a circuit between Brownsville and Roma. The adobe structure was torn down in 1885, and the Lomita Chapel that stands today was built of sandstone from a nearby hill in 1899. At the city park, interpretive signs point out such sites as the chapel, original well, and baking oven. 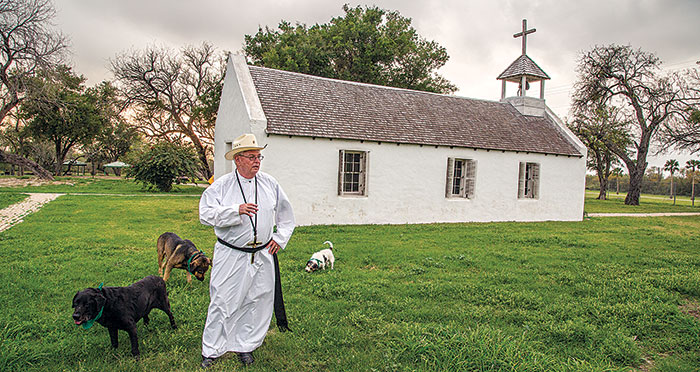 Heading north into town from La Lomita, Farm-to-Market Road 1016 turns into Conway Avenue, named for John J. Conway, who founded Mission in 1907 with J.W. Hoit after purchasing La Lomita Ranch from the Oblate fathers. One block east of Conway, the Mission Historical Museum occupies the 1939 office building of John Shary, who helped start the Rio Grande Valley citrus industry in the 1910s. The museum’s Mission Then and Now exhibit contrasts a 1910 image of La Lomita Chapel with a recent photo. Also on display are military uniforms dating to World War I that honor local veterans, as well as an exhibit about the history of education in Mission, including a vintage school desk with inkwell. The museum annex, housed in a former post office building, features a Works Progress Administration mural painted by Xavier Gonzalez, a na-tive of Spain. Scene Along the Rio Grande depicts a lone cowboy resting by the great river.

Near the museum complex, the former railroad depot houses the Citrus Fiesta offices. The annual event, which draws participants from across the Valley, features a different theme each year; the January 2015 theme will be “’50s and ’60s Rock-and-Roll.” A highlight of the fiesta is the “Parade of Oranges,” in which at least 85 percent of each float must be covered in citrus or locally grown produce. Palm leaves adorn many floats, and citrus gets sliced, wrapped in plastic, and stapled, along with celery, onions, and carrots. “We’ve had 100,000 people lined up along the parade route to see 200 floats,” Director Berta Filut says.

At the Citrus Fiesta Royal Gala, girls age six and up reign in velvet and satin as duchesses and princesses in the Courts of Tangerine, Orange Blossom, Lantana, and Live Oak. Even King Citrus glams it up in bright, fruit-themed peacockery, topped with a crown. But the event that really makes the fiesta distinctive is the costume contest featuring citrus products.

“Everything must be covered in product grown in the Rio Grande Valley,” explains Filut, displaying a burgundy skirt adorned with bougainvillea and a hat made with dehydrated tangerine and lemon peel. Burnt peels make darker shades, and onion skin resembles lace. Arrangements of hackberry, cantaloupe, and pumpkin seeds add decorative touches. Ripley’s Believe-It-Or-Not featured the foodie fashions in a 1940 syndicated article when Mission’s Wilma Beth Shulke submitted a photo of herself modeling an outfit of corncobs and orange peels.

On the city’s southwestern edge, the 760-acre Bentsen-Rio Grande Valley State Park, headquarters for the Valley’s nine-site World Birding Center, grants communion with nature that enlightens, educates, and rejuvenates the body and mind. The state park offers tram rides through its outdoor cathedral of flora and fauna, along with guided nature walks, bird walks, and “creatures of the night” walks. “Our theme for May is family picnicking, and the most prevalent birds to watch for this month are migrating warblers and flycatchers,” says lead biologist Melissa Chadwick. Some 340 bird species have been documented in the park.

Nearby, the 100-acre National Butterfly Center welcomes visitors in a distinctive structure designed by Wendy Evans Joseph, the principal architect for the United States Holocaust Memorial Museum in Washington, D.C. The center attracts butterfly enthusiasts from around the world. “We frequently have visitors come in and declare they are looking for a malachite, a Blomfild’s beauty, or a Guatemalan cracker,” Director Marianna Trevino Wright says.

This fall, the center’s gallery will host an exhibit of 26 butterfly-themed art quilts from the Texas Quilt Museum in La Grange. But the Butterfly Center’s real action happens outside, where a former onion field is being transformed into a Texas savanna of grass and wildflowers. Visitors can hike through three habitats—the meadow, the Hackberry Trail and ravine, and the barretal, a man-made mound on a former wetland. Demonstration and research gardens feature more than 100 native South Texas plants, most of which produce nectar that attracts butterflies. The center’s nursery also sells plants.

“We especially encourage people to plant milkweed,” Wright says, since milkweed is a host plant for monarch caterpillars. Populations of the iconic, migratory monarch butterflies are declining, she explains, due in part to the use of the milkweed-destroying herbicide glyphosate in gardening products. Still, there are more than 150 species of butterflies native to the Lower Rio Grande Valley. “Fall is the peak butterfly season,” adds Wright, “especially October and November, when clouds of butterflies may be so thick here it’s almost surreal.”

The National Butterfly Center is also home to a canvas tipi, which local art students recently painted with a mural that depicts Native American butterfly folklore. “Since butterflies are silent, some Native Americans believe this creature that makes no sound can be trusted with human secrets and desires,” explains Wright. “The tipi depicts someone whispering their wish to a butterfly that carries it on the wind to the Great Spirit. We think this is a wonderful iteration of the butterfly’s divine connection to all of nature.”

Soaring and silent, the beautiful, delicate butterflies continue the work begun so long ago by the pioneer padres, a mission performed in harmony with the timeless flow of the Rio Grande.