In search of eats along the beaten path 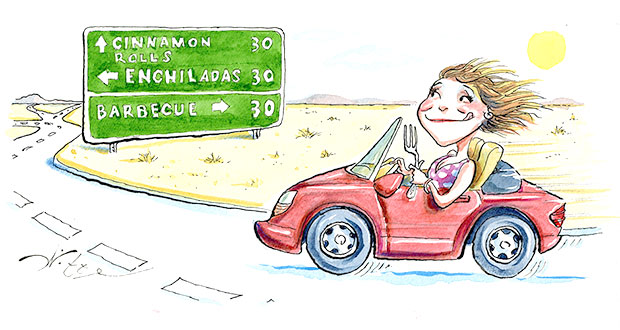 Almost 30 years ago, I drove every mile of Texas’ interstate highways in search of something to eat. Every mile. And not only did I drive those 3,232 miles, but I stopped for a bite approximately every 30 miles along the way.

I was writing a book, and the result of my calorie-intensive labor, The Interstate Gourmet: Texas and the Southwest, is long out of print. But I firmly believe that the culinary territory I charted has not changed in any monumental way.

Interstate 35 acts as the state’s culinary Great Divide. The cream-gravy train rolls west only to stall out in the desert, where Mexican entrées fight fire with fire. In the woodlands east of I-35, barbecue prevails, with ever stickier and sweeter sauce, until at last it gives way to the spicy Cajun borderland. South of San Antonio, crispy tacos become what are known as mariachis, palm-sized, filled soft tortillas. North Texas is sweet-tooth heaven; plump and gooey cinnamon rolls swell to plate size just outside of Oklahoma.

After asking virtually every citizen of more than one small town where to eat, I learned a few things about whom—and how—to ask for suggestions. Service-station attendants decades ago were a favorite source for good hometown chow, but convincing them that I wanted to eat where they ate frequently proved almost impossible. Any crowd is your best bet in the search for an honest opinion; if you can get a clutch of ladies at the thrift shop to arguing, take notes.

You’re in the door, you’ve read the menu, and you have a few questions. This is where you want to watch your language. I once asked a waitress if the fish of the day was fresh, only to be quickly reassured there were laws against that sort of thing. “I couldn’t go down to the lake and haul you in a bass,” she explained.

Another culinary lesson learned: Don’t eat between the hours of three and five, a restaurant twilight zone. And finally, if you order a chili burger and the waitress reappears after 20 minutes to tell you she can’t find the chili, move along.

Looking back, there were many marvelous bites in memorable restaurants. But never, after the first two days, was it what you’d call a picnic. Even so, I’d like to eat up the miles all over again.