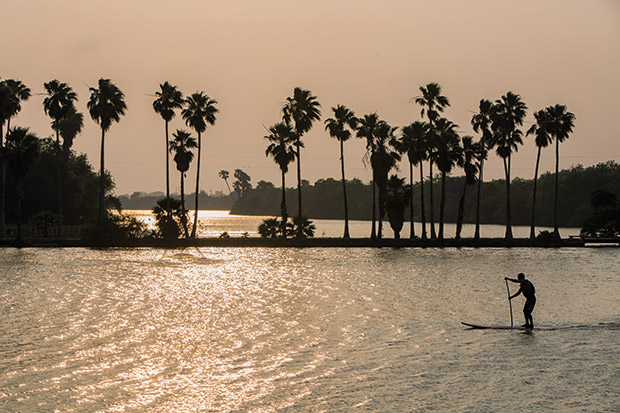 Back in 1973, times were simple on Acacia Lake Drive. Our family had just moved to Brownsville from Mexico City. I was a 10-year-old fisherman who, while in Mexico, used to practice casting with my Zebco rod and reel into the empty lot next door.

After the move north, I found myself living the dream on an oxbow lake, Resaca de la Guerra, and fishing every single day. I felt like I’d landed on Gilligan’s Island. For me, it was paradise.

The Oxbow Lakes or resacas, as they are known in South Texas, are a series of old Rio Grande channels that split off like the fingers of an outstretched hand into the Gulf of Mexico and Laguna Madre bay. These shallow waterways—rich with birdlife and semitropical vegetation—have long ago been cut off from the main river, forming meandering river-like lakes that flow through the eastern corner of the Rio Grande Valley. Many people don’t even know they exist.

To me, the resaca meant freedom, a path to adventure. During my junior high and high school years, I spent seemingly countless days fishing for largemouth bass and catfish from my backyard or from the bridge down the street. I found solitude and independence on the water with the various watercraft I owned over the years, including an inflatable raft, a Styrofoam boat that could be paddled or sailed, a Sunfish sailboat, and a 12-foot, flat-bottom aluminum boat with a Mercury 10-horsepower outboard engine. I also paddled my surfboard, training to surf storm swells that hit the coast during hurricane season. 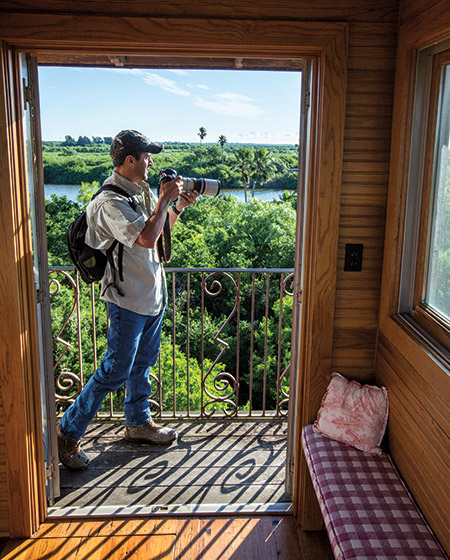 Since those days, I have traveled the world as a photojournalist, documenting everything from war zones to Olympic Games to an Amazon River paddling expedition. And I go back to the Rio Grande Valley many times a year for work and play.

Most recently, in May, I made a nostalgic return to the resacas and launched my canoe by the bridge on Acacia Lake Drive. I paddled behind our old house, and all of those childhood memories came flooding back. The jungle-like shoreline resembled the rainforest I had experienced on the Amazon. And when I posted photos of my trip on Facebook, many friends asked if I was doing a story in Costa Rica.

However, some things have changed. Those flocks of native birds now include pairs of squawking red-crowned parrots that have relocated from Mexico. Birders have largely replaced the anglers that once lined the banks, some of whom have moved on to fish the salt waters of the Laguna Madre and the Gulf. 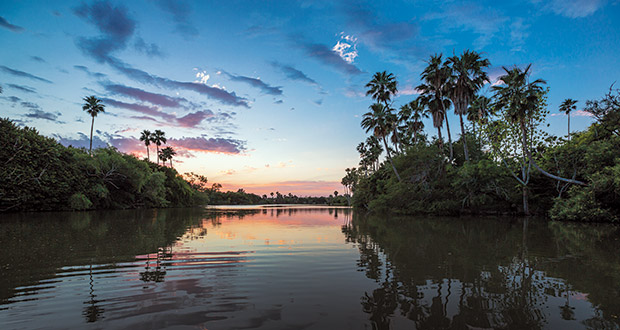 What was home for me then is different in some ways, but the feelings evoked by being on the water are still the same.

Taking a cue from the book The Road Less Traveled by M. Scott Peck, these resacas could be called “The Lakes Less Paddled.” It takes an individualistic streak to bypass the clearer, greener waters of nearby South Padre Island, but if you do, you will enjoy an experience you can’t get anywhere else in Texas. Adventurers, birders, kayakers, paddle-boarders, and anglers (with their families) will be rewarded by these hidden gems.

A handful of locals ply these waters, which average three to five feet deep. At sunrise or sunset, local landscape photographer Carlos Nuñez paddles his standup paddleboard on the resaca behind his house, looking for just the right angle for his next picture. He has exhibited his images at the Historic Brownsville Museum and shares them regularly on Facebook.

“Resacas are unique to South Texas, ” says Carlos. “They have cut out a path for centuries. This perspective has fed my imagination, drawing me to capture their many moods.”

Danny Cuevas, a student at the University of Texas Rio Grande Valley, knows those moods well. He offers kayak tours around Brownsville and educates his clients about life on the resacas—“always an adventure,” he says.

Through their steadfast efforts, both Danny and Carlos bring much-needed awareness to these waters and share the wonderment of the resacas, the secret paradise of South Texas.

Intrepid photojournalist Erich Schlegel credits his childhood explorations of Rio Grande Valley resacas for “developing the sense of adventure and discovery that I have today.”