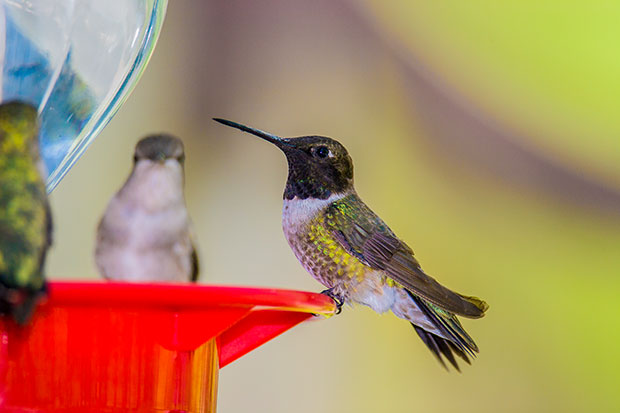 The 10-minute drive from our house in McAllen to Quinta Mazatlan, one of the most popular sites in the Rio Grande Valley’s World Birding Center network, takes us past historic downtown, the airport, and the shopping mall—not exactly what you’d expect for a trip to a lush nature center.

Want to attract hummingbirds to your garden?

And that is precisely the point, says Quinta Mazatlan Manager Colleen Hook. The McAllen metro area is one of the fastest-growing areas in the United States, yet it lies at the convergence of two major migratory flyways. “Our niche is a ‘home and a habitat,’” Hook explains. “We serve as a demonstration site of what you can design around your own home to support and attract wildlife. More than 225 bird species have been documented here. It’s truly an urban sanctuary.”

Quinta Mazatlan’s “home” is an 80-year-old Spanish Colonial Revival-style mansion—at more than 6,700 square feet, it’s one of the largest adobe structures in Texas. Complete with a Roman bath and thousands of hand-painted tiles, it was the wonder of McAllen when it was finished in 1935. But the property had fallen into disrepair by the time it went up for auction in 1998. That’s when city leaders stepped in and purchased Quinta Mazatlan, envisioning a public space that could protect ecologically sensitive land, deliver environmental education programs, and attract tourists to the region. “Thus,” Hook says, “the creation of a ‘mansion with a mission’—restoring habitat one backyard at a time.”

High on a hill, the mansion was the first thing I saw when I arrived with my bird-loving son Byrdie and his plucky two-year-old sister Ana. It was Byrdie’s fourth birthday, and I had let him choose our destination for the afternoon. “Please follow the red brick path to the main house,” the sign at the gate invited, and the kids sprinted along the palm-lined promenade in that direction.

Before we could make it to the gorgeous, hand-carved doors, though, we were sidetracked by an invitingly tranquil courtyard: the hummingbird garden. As Byrdie and Ana marveled at the tiny birds, which darted from one nectar plant to the next, I sat on a stone bench, listening to the distant sounds of the city mingle with the gurgle of the fountain and the rustle of native Turk’s cap and esperanza plants. Although some birds need large expanses of woodland to survive, others—like hummingbirds—are actually well-suited to urban living. The secret is to provide them with the right kind of habitat—such as colorful nectar-producing native plants. If you build it, the birds will come: Quinta Mazatlan is frequented by four different species of hummingbirds, and recently welcomed broad-billed and blue-throated varieties—extremely rare visitors from central Mexico.

After 15 minutes of hummingbird watching, we made it into the mansion. But a full tour would have to wait for another day. By the time I managed to grab a handful of fliers for upcoming events—the park offers programs for everyone from toddlers to Master Gardeners, as well as the annual Hummingbird Days in September and the Vida Verde Earth Day festival in April—Byrdie and Ana had made a beeline for the Forest Sculpture Trail. There, 25 lifelike bronze sculptures of Valley fauna—ranging from big cats to a buff-bellied hummingbird—are set against the backdrop of their preferred habitats. Next, we made our way to the children’s Discovery Center, where the kids burned off some of their boundless energy by climbing logs and boulders.

Soon it was time to return to the mansion’s gift shop to make good on my birthday promise. I helped Ana choose a nifty owl pen while Byrdie browsed through toys, books, and handmade Mexican papier-mâché bird rattles. At last, he announced his selection: a red Best-1 Hummingbird Feeder ($12), which was manufactured in Poteet. His wish: To bring hummingbirds to our own yard. 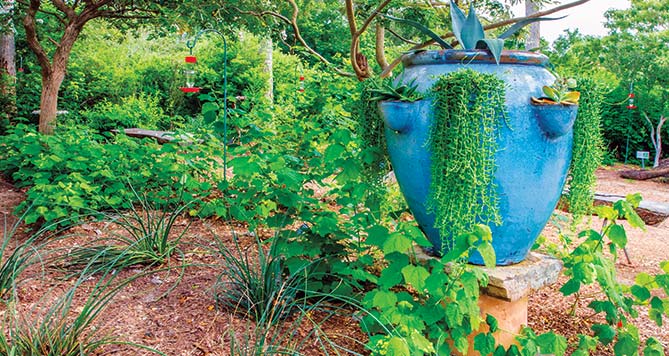 I was touched by the simplicity of his birthday wish. But I was also more than a little worried that he’d be disappointed should no birds arrive. At home, I helped Byrdie follow the instructions for preparing the nectar, and we installed a hook for hanging the feeder on the back porch. For a few days, my fears appeared to be confirmed. No hummingbirds arrived, and Byrdie grew impatient.

Then, one morning, there it was: a migratory ruby-throated hummingbird, so close that we could see the jeweled collar that lends the species its name. Byrdie’s face radiated joy. His birthday wish had come true.

Since then, our success with the feeder has inspired us to try our hand at planting our own garden of native species—and hummingbirds visit by the dozens. Our backyard is no Quinta Mazatlan, but it turns out that birds aren’t really that picky, as long as food and water are available. Thanks to Byrdie, our family has a gift better than any plastic trinket. True to the spirit of the “mansion with a mission,” we have brought the hummingbirds home.