There’s No Place Like Floore’s Country Store in Helotes

Opened in 1942, this little honky-tonk nestled among the live oaks west of San Antonio keeps a fire burning for country music

Written by Art Williams, Photographs by Michael Amador | From the November 2013 issue | Updated: May 2, 2019 | Filed Under: TRAVEL 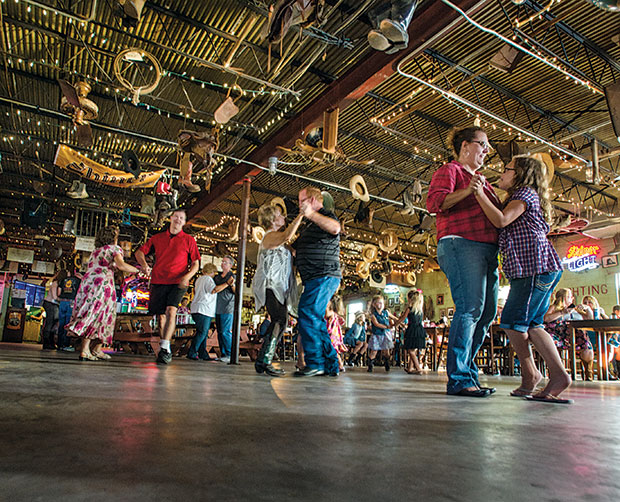 It’s been 50 years, give or take, since a clean-shaven, copper-locked singer-songwriter from up past Waco first took the stage at John T. Floore Country Store, which was then—as now—just a little honky-tonk nestled among the live oaks west of San Antonio. No recording exists of that performance, but why would it? No one knew then that this slightly built guy with the nasally voice would become Willie Nelson, the icon, or that the relationship he built with Floore’s would still be going strong into the 21st Century.

It’s a safe bet that the gig was a welcome one for the future Red Headed Stranger, still a decade away from his outlaw-country heyday and struggling to pay the bills. Floore’s, on the other hand, was already well-established, having hosted the likes of Hank Williams and Bob Wills, the King of Western Swing himself, in the two decades it had been open.

At the time John Floore opened his eponymous dance hall/meat market/bar/grocery store back in 1942, tiny Helotes might have seemed an unlikely mecca for music lovers. Though it had boasted a post office since 1873, the former Lipan Apache community was still little more than a stream crossing for those traveling between Bandera and the Alamo City. (Helotes wouldn’t even be incorporated until 1981.) But Floore, a music promoter and manager of San Antonio’s Majestic Theatre, saw a promising future in this wide spot in the road, and he invested in that future.

Thanks to his know-how, Floore booked big names right from the beginning. Patsy Cline and Faron Young played here; later, so did Little Richard, Elvis, and Bob Dylan. Playing Floore’s, whether on the inside stage or the larger one outside, became a rite of passage on the touring circuit and now is, for many artists, a can’t-miss homecoming each time they’re planning to be anywhere near South Texas. These days, you can catch Robert Earl Keen, Charlie Robison, the Randy Rogers Band, or the Josh Abbott Band a couple times a year, and Willie at least once. Lyle Lovett and Dwight Yoakam try not to let too much time pass between their own Floore’s shows.

The three owners who have presided over Floore’s since John’s passing in 1975—he sold the business to his cook for $10 shortly before his death—haven’t changed the dance hall much over the years. Neon beer signs were hung, an ATM machine installed, and a strictly enforced no-smoking policy implemented. And about 10 years ago, the business added new picnic tables outside, and, at long last, air-conditioning inside the tin-roofed metal building. That’s also when Floore’s built a tall corrugated-metal fence to discourage music fans from backing their trucks up to the fence, dropping their tailgates, and enjoying outdoor shows under the stars, free of charge. 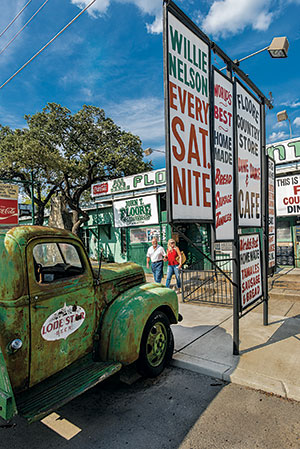 Kari Campbell of Boerne has been coming to Floore’s for years. She makes the 16-mile drive for concerts, both inside and outside, but insists that AC doesn’t make much difference when the place gets rockin.’ “It’s hot and crowded—and lively and fun,” says Campbell, whose three college-age sons are also Floore’s regulars. “It makes me nostalgic for my college days and takes me back to all the dance halls of my past.”

Campbell’s first Floore’s show was Robert Earl Keen in the mid-1990s—“crazy-crowded,” she says, adding that the vibe changes quite a bit depending on who’s playing. Keen draws a crowd that gets a bit rowdy, while a Dwight Yoakam concert is all about the dancing. With Willie, the atmosphere is more laid-back.

But what never changes, Campbell says, is the intimacy of the venue, where all seats are general-admission and “you are literally a few feet away from whoever is performing.” Indeed, Floore Country Store—especially its indoor stage—is as intimate as it gets. You wouldn’t get any closer to the stage at your third-grader’s holiday concert in the elementary school cafeteria. And once you’ve sat near enough to see a single bead of sweat roll down Josh Abbott’s neck as he croons “Oh, Tonight,” well, it’s hard to go back to the nosebleed section at a 20,000-seat arena better suited for enjoying a basketball game than the emotion of music.

Then there’s the wonderment that comes when you ruminate on the hallowed ground beneath Josh’s boots. Elvis’ gyrating hips got the crowd screamin’, Bob Wills and his Texas Playboys got them swingin’, Bob Dylan got them thinkin’, and it all happened right here on this concrete floor. General Manager Becca Payne has worked at Floore’s for 12 years and says she still gets overcome when she considers the place’s storied past. “The vibe is indescribable,” she says. “It doesn’t matter if there are 50 people or a line out the door. There is a certain feel that we have because of our history that few other places can match.”

In the main hall, the cinderblock walls are still their original hospital green, and the wooden ladder-back chairs and four-top tables are sturdy but comfortably distressed by decades of use. Hanging from the ceiling are corny hand-lettered signs (“Home Cookin’ Is Where A Man Thinks His Wife Is”) and strings of white Christmas lights, as well as boots and hats, some contributed over the years by couples holding their wedding receptions at Floore’s, but most offered up for posterity by past performers. The western wear is unlabeled, but as with the stage, it’s tempting to let your mind wander. Is that Waylon’s black Stetson? Merle’s dusty Luccheses? George Jones’ straw Resistol?

Even without its vintage décor, Floore’s is a place that is uniquely Texas, the kind of place you take your kids so they appreciate what’s special about the Lone Star State. Open Friday through Sunday, the atmosphere varies depending on whether you come for a Friday-night concert or Sunday’s free family dancing. The latter is where you’ll see fathers introducing their daughters to two-stepping, the girls’ tiny bare feet standing on their dads’ big boots as they stomp and glide around the dance floor. 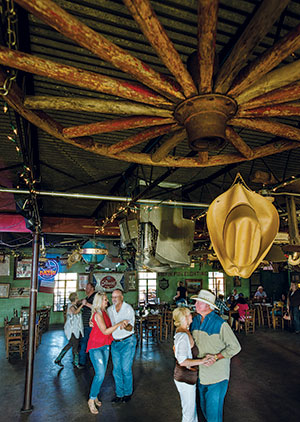 Floore’s had a few tough years recently, like most everybody did, when folks waited as long as possible to buy their concert tickets, ate at home before coming to a show, and bought less beer and merchandise than in the ’90s. But Payne says that receipts these days are better than ever—the best they’ve been in her tenure.

So as each workweek comes to a close, Floore’s is still where you’ll find couples and groups of friends out relaxing, the guys clad in faded jeans, boots, and maybe a Cavender’s gimme cap, the girls in shorts or a denim skirt. The line at the bar will grow and shrink depending on how busy the waitresses get as they shuttle burgers, brisket, and cold bottles of Lone Star to their tables. You’ll see Floore’s unofficial mascot, a five-foot armadillo figure, sometimes sporting a cowboy hat, that’s been there as long as anyone can remember. And if it happens to be a night when Willie’s playing, you’ll see a lot of Floore’s signature tamales flying out of the kitchen—they’re a favorite of Willie, his crew, and band members.

What you won’t find is anyone putting on airs or fretting about their high heels or neckties. And you may not see the ghosts of any old troubadours, although it’s possible that you’ll feel their presence. After all, there are not a lot of places left anymore where they can go and feel this comfortable. There’s not much out there, anywhere, that feels quite like Floore’s.