Spontaneity can be the spice of life 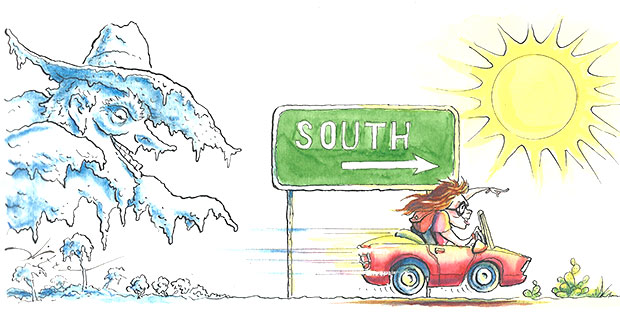 I am a planner. I arrive hours early for flights, almost that early for doctor’s appointments and even —much to my child’s annoyance — movies. I inherited the “be prepared” gene from my father, a career military man. I have likened his approach to planning any vacation to creating a battle plan. There were always endless maps, brochures, schematics and graph paper (for packing) involved in every trip, well into the years when he was just planning a weekend getaway with my mother.

All of which is to say, spontaneity and traveling, not so much. Getaway fares, last minute deals, a “let’s just see what happens when we get there approach” — alien concepts. Right up until 1984.

It was January that year when the well pump of my ramshackle, unheated Hill Country farmhouse froze solid for the second time since Christmas. There was nothing flowing from the taps, no chance for hot tea or a warm shower. That scenario was tough, but tolerable. Then, the water in the toilet bowl froze.

Should you question how I came to be living so rough, allow me to note that I was young and in love. I lived with the starving artist of my dreams on 6,000 acres of rolling heaven near the Blanco River. When my beloved and I spotted the canted farmhouse, abandoned and forgotten, we drove into the nearby tiny town and asked around until we found a realtor who knew the owner. We literally begged her to rent the splintery house to us. And so, she did. It had neither heat nor air-conditioning and the only source of water was a nearby spring via the hinky pump, but there were million dollar views out every cracked window.

We moved in mid-summer. And everything was grand right up until the first freeze.

When the second freeze hit, overcome by discomfort, I did something I had never done before: I packed up in less than 20 minutes and left, with no clear plan other than to head south. Pointing my nose toward the Rio Grande Valley, I drove into a steady drizzle that became my silent escort all the way to Rio Grande City.

In McAllen the sun rose at last. The air felt hot and steamy after weeks of showers, and when the gray clouds scudded off, a world of unexpected wonders opened up.

Exploring a grand new landscape unconstrained by expectations made for the best sort of travel.

But all was not sweetness and light in El Valle. The freeze that drove me out of the Hill Country was more insult to injury for Valley residents still struggling to recover from the even more brutal one that had slapped the flora flat weeks earlier. It was a historic event, only the third hard freeze to threaten the survival of the iconic Washingtonia palms since they were planted by land developers in the 1920s.

Along the highways and surrounding hotels and resorts the palms stood tall and placid as ever, but rough brown turbans had replaced leafy crowns. At the McAllen Botanical Gardens succulents were stiff and broken, and everywhere bougainvillea dropped leaves like cornflakes. The freeze had laid waste to the citrus crop and devastated the aloe vera fields.

And there I was, a burgeoning writer, right in the middle of a story no one else was writing.

And just like that I found the beauty of the unexpected journey. I was grateful for the sunshine and warmth but also that I had run away from home smack into the first great story of my career. I discovered, too, that exploring a grand new landscape — already beginning its slow recovery — unconstrained by an itinerary or expectations made for the best sort of travel.

I didn’t change my planning ways over night. I still set forth carefully most of the time. But not always. Spur-of-the-moment decisions saw me hop a bus for Nuevo Laredo with a backpack as my only luggage. More radically, I once headed for the airport with a set number of dollars in my low budget and a determination to catch the first flight out that I could afford, wherever it went. I once spontaneously headed out for a camping trip on Christmas day and discovered my own version of Silent Night. Another time, I hit the road to Livingston in a quick decision that had me sorting out the best ways to deal with a hurricane determined to meet me there.

It was that sprint from Jack Frost all those years ago that opened my eyes to just saying yes to heading out without a battle plan once in a while. Not every impromptu trip has been successful. But the ability to accept the unexpected and embrace the journey-less-planned has frequently been the road to an epiphany — always a destination I look forward to.