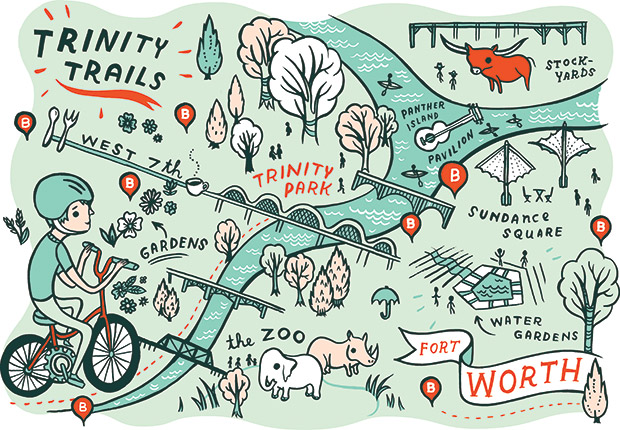 From my seat on the shaded patio at Woodshed Smokehouse, the view takes in a wall of leafy green trees and rippling water that glimmers in the sun. This restaurant overlooks the Clear Fork of the Trinity River and Fort Worth’s Trinity Trails, about 70 miles of paved and crushed-limestone routes suitable for hikers, bikers, runners, and equestrians. The trails connect many of the city’s parks and attractions, setting the stage for my weekend of outdoor recreation, dining, and relaxation—all without a car.

For information, including maps, check out the online forum www.trinitytrails.org and the Tarrant Regional Water District, www.trwd.com/fort-worth-trinity-trails-map.

I’ve started my Trinity Trails adventure with a hearty lunch. Chef Tim Love draws on a variety of woods like mesquite and pecan stored in onsite sheds for his expertly grilled, roasted, and slow-cooked meats, fish, and vegetables. I order the butcher’s sandwich, piled high with brisket, pulled pork, sausage, coleslaw, house pickles, and mustard, along with a side of Mexican roasted corn. It’s more than adequate fuel for the bike ride ahead of me.

The Trinity River rises from four tributaries—the East Fork, Elm Fork, West Fork, and Clear Fork. Near downtown Fort Worth, the Clear Fork empties into the West Fork, which then runs toward downtown Dallas, where it meets the Elm Fork. The East Fork starts north of Dallas, skirts east of the city, and joins the West Fork south of town. From that junction near the community of Rosser, the Trinity then flows 423 miles to the coast, making it the longest river entirely in Texas.

Historians believe Spanish explorers gave the Trinity its name in 1690. In the 1800s, steamboats plied the river carrying people and goods, including cotton. Railroads later supplanted the steamboats, and in the 1950s, a flood-control project channeled the Trinity’s routes through Fort Worth and Dallas. For decades, both cities mostly ignored the tamed river, but more recently, each community has realized its recreational potential. Fort Worth developed the Trinity River Vision, a master plan for the river, and the Tarrant Regional Water District built the Trinity Trails system as part of that plan.

My meaty sandwich devoured, I check out a bicycle at the B-cycle station next to the restaurant and head out to explore the network of trails. I ride toward downtown, about three miles away, slipping under bridges, past forests of sycamores, willows, oaks, redbuds, and junipers, and in the water, herons, egrets, ducks, and turtles. The trail traverses Trinity Park, home to a duck pond, several playgrounds, and a fishing pier. As the Forest Park Miniature Railroad train crosses the trail, I stop briefly as passengers wave merrily.

I detour through the park, leave my trusty two-wheeler at another B-cycle station, and walk a short distance to the Fort Worth Botanic Garden. This jewel features more than 2,500 species of plants in 23 themed gardens—rose, Japanese, fragrance, perennial, seasonal, and water conservation among them—as well as a conservatory. I opt for the Texas Native Forest Boardwalk, an elevated path with platforms that provide views of the garden’s major features. Active educational exercises entertain along the way, like walking on balance beam logs, using spotting scopes, and crawling through hollow tree replicas.

Back astride another bicycle, I continue on my way, stopping to refill my water bottle at one of the fountains dotting the route. Several times, I pause to watch people trying their luck at one of the trail’s fishing areas. Matt Oliver, public information officer with the Trinity River Vision Authority, informs me that people catch yellow and blue catfish, crappie, and largemouth and black bass. (The Texas Parks and Wildlife Department releases fish periodically to improve anglers’ chances.)

The afternoon almost gone, I swing into downtown on Taylor Street, return my bike—more than a dozen stations in the downtown area and 44 in all make it easy—and pop into my lodging for the weekend, the Courtyard by Marriott, to clean up. Then it’s a short walk to Panther Island Pavilion, a beach and waterfront stage on the Trinity that hosts a variety of events year-round. During the summer Rockin’ the River concert series, live bands play to a crowd lounging in tubes on the river. I’m here for Oktoberfest Fort Worth (September 22-24, 2016), a line-up of live music, traditional German beer and cuisine like schnitzel and strudel, keg rolling, stein hoisting, and a dachshund parade.

All this fun has me ready for a good night’s sleep. My hotel, originally called the Blackstone Hotel, opened in 1929 and hosted famous guests including Richard Nixon and, according to rumor, Clark Gable. Restored in the late 1990s, the hotel became a Courtyard by Marriott. Most of the original interior is gone, but a small set of original terrazzo steps remains in the lobby—nicknamed “the steps to nowhere.” And the exterior retains its historic Art Deco look—23 stories of bricks and windows with original spires and terraces. Best of all, the hotel is in the heart of downtown and only about 10 blocks from the Trinity Trails.

Next morning, I hop on another B-cycle and pedal a little more than a mile to the West 7th District, a trendy, pedestrian-friendly area covering nearly five blocks. I meet a friend for breakfast at Righteous Foods. Formerly Lanny’s Alta Cocina, this brainchild of Chef Lanny Lancarte serves breakfast, lunch, and dinner crafted from locally sourced ingredients. My “slow coffee” tastes rich and smooth, and I devour the Ranchero Green Eggs and Ham—organic eggs, corn tortillas, pork shoulder, tomatillo, and queso fresco—along with a side of crisp, flavorful uncured bacon.

After lingering over another cup of coffee, I ride back to Panther Island Pavilion to rent a kayak from Backwoods Paddlesports, which offers single and tandem kayaks, canoes, and paddleboards. I paddle upstream on the West Fork for about an hour, checking out birds and turtles before turning my boat around and encountering beautiful, photo-worthy views of the Fort Worth skyline.

I turn in the kayak and pedal to downtown’s Sundance Square Plaza, a recently renovated outdoor space that serves as the centerpiece for a 35-square-block entertainment and business district. A Chisholm Trail-themed mural covers a two-story wall, giant umbrellas shade outdoor tables and benches, and 216 individual fountains spray from the ground, prompting more than a few kids to soak their clothes. At Bird Café, located in the 1889 Land Block Title Building on the corner of the square, I admire the walls and their watercolors of birds painted by Fort Worth artists Scott and Stuart Gentling. The café’s lunch menu carries tantalizing salads, lunch plates, and a selection of sandwiches. I opt for smoked chicken salad on a croissant, and I’m delighted to find watermelon and goat cheese in my side salad.

Next, I spend the afternoon exploring other parts of the Trinity Trails by bicycle, riding up to the famous Fort Worth Stockyards, northwest of downtown, then pedaling east along the West Fork. Back downtown, I descend into the Fort Worth Water Gardens, several city blocks of various water features, from a still pool to fountains and, my favorite, the Active Pool, a series of steps and terraces that descends four stories from street level, covered in cascading water.

As I make my way back toward my hotel for the night, I stop along Main Street for dinner at Grace, a posh eatery set in a refined yet comfortable space, which takes a sophisticated spin on classic American cuisine. Then—why not?—I splurge on dessert with the chocolate-and-hazelnut tart, with candied huckleberries, marshmallows, and chocolate mousse and ice cream. It seems a fitting conclusion to my active Fort Worth weekend. I’ve earned it.