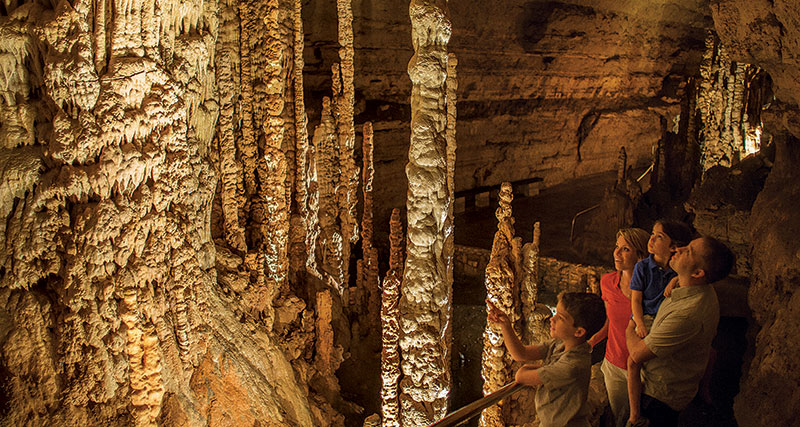 As the smallest of the college students exploring a Hill Country cave on March 27, 1960, 19-year-old Orion Knox found himself elected to wriggle first into a previously unexplored crevice.

“It was a really tight little crawlway,” he recalls. One of eight St. Mary’s University students exploring a cave on the Wuest cattle ranch in New Braunfels, Orion led a group of four down a narrow passage beneath a slab of limestone known locally as Natural Bridge.

“I had to break off some rocks along the way to get through,” Orion remembers. After he slithered some 60 feet, his headlamp suddenly illuminated a large cavern filled with formations created over thousands of years by rain seeping through the limestone and depositing calcite upon reaching the cavern. Waxy calcite stalagmites, looking like towers of melting ice cream, arose from the bottom of the cavern while icicle-like stalactites dangled above.

“It was spectacular,” Orion says. “After that, we just kept finding room after fantastic room.”

Otherworldly patterns inside the caves resemble melted ice cream and undulating ribbons. The caves are a National Natural Landmark site.

Orion dropped out of school for a couple of years and helped the Wuests turn the caverns into a commercial attraction. On July 3, 1964, the first tourists took the trek 180 feet down into Natural Bridge Caverns. Families have been oohing and aahing ever since.

Natural Bridge Caverns celebrates its 50th birthday with offerings greatly expanded over the years. Visitors can now take several different cave tours, including a daybreak lantern tour and two adventure tours for those who want to experience the caverns much as Orion did a half-century ago.

Natural Bridge Caverns also offers non-caving fun. Kids giggle as they lose themselves and each other in a 5,000-square-foot outdoor maze. Adults and older children howl down ziplines and teeter (safely harnessed) along the planks and rope ladders of a 60-foot-tall obstacle-course structure while, far below, toddlers balance on a beam a few inches from the ground. In Natural Bridge Mining Company, parents can buy a bag of dirt embedded with treasures, which kids can run through a sluice to discover handfuls of rough gems and minerals, fossils, and arrowheads. At Big Daddy’s Sweets, kids find not only rock candy and saltwater taffy but also creamy fudge, Blue Bell ice cream scooped in waffle cones, and freshly squeezed lemonade.

The main attractions, though, remain the caverns. As we start the Discovery Tour (the original 75-minute trek offered for 50 years), 37-year-old Travis Wuest, who first entered the caverns as a baby in his mother’s backpack as she gave cave tours, points out where Orion first glimpsed the vast cavern, along with a special stalagmite designated as a touchstone. Elsewhere, touching the delicate cave formations isn’t allowed, as perspiration and oils from the skin can cause damage. But since children (and adults) love to grab things, this stone lets everyone feel the cave’s claylike texture.

Inside the caverns, imaginations run wild. In a room known as Sherwood Forest, a cluster of lean, towering stalagmites conjure the feeling of a real forest. The Castle of the White Giants, announced by a honeycomb of graceful little pools, features the cave’s largest formations, some of which look like frozen waterfalls. Nearby lies Grendel’s Canyon. Might a dragon live in there? The Hall of the Mountain King, 350 feet long and 100 feet wide, looks like a cathedral for cave-dwelling gnomes.

The second cave tour, Hidden Passages, lasts 70 minutes and descends steeply some 180 feet into a second cave found about seven years after the first one opened to visitors. Unlike the Discovery Passages, which harbored colonies of bats thousands of years ago, this cave never did, probably because it was entirely sealed until explorers drilling shafts from above discovered it. This lack of access likely contributed to the cave’s delicate formations, explains Travis.

Thousands of delicate stalactites called soda straws decorate the cave’s ceiling, along with thin, wing-like projections. At the bottom, in the huge Cathedral Room, massive drip formations resemble a pipe organ. Here, guides turn out the lights, and in the darkness, nervous laughter echoes from children and adults alike, especially when the conversation turns to the cave’s blind spiders and crickets, who have developed extra-long appendages to help them feel their way around in the dark.

What goes down must come up, and our calves get a workout on the way back up. The caves remain a constant 70 degrees, but with 99 percent humidity, we’re sweating by the time we see daylight again.

Cavers still seek new caverns on the Wuest ranch, Travis says, and the explorers include Orion, who lives in Austin and says he still loves to poke around inside the caverns with his wife, Jan.

“Anytime we’re headed south, we swing by the cave,” says Orion. “I like seeing all the people taking tours and knowing that I had a part in making it happen.”