The revival of downtown Houston as the city’s playground 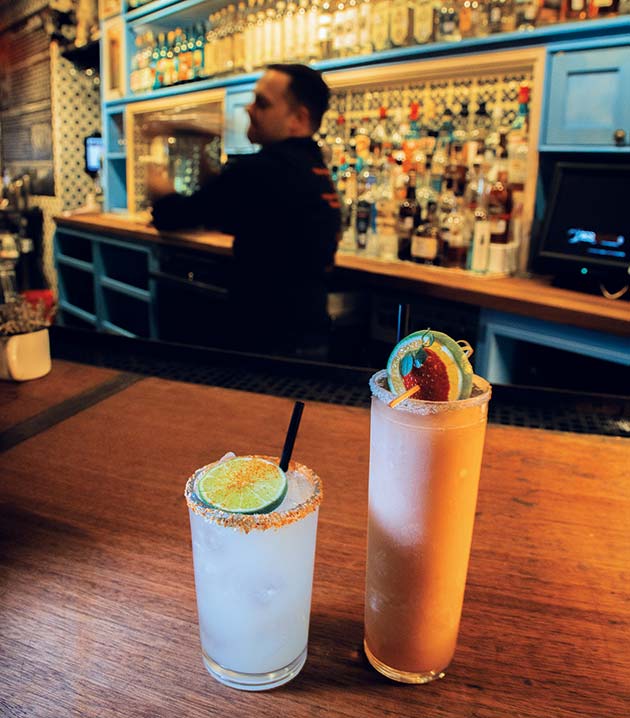 Visiting my Houston cousins a few years ago, I joined them for a late-afternoon trip downtown to sip wine at La Carafe, perhaps the oldest bar in the city.

The Houston Visitors Center opens 9-4 daily except Sundays on the first floor of Houston City Hall, 901 Bagby St. For maps and other travel information, call the Greater Houston Convention & Visitors Bureau at 800/446-8786.

Listening to Edith Piaf and Hank Williams tunes wafting from the jukebox, we marveled that the 155-year-old building, with its dark and cozy corners, could survive in a world devoted to all things new and shiny. As we walked back outside to head home, I thought it a shame that there was little else to bring folks downtown for some fun.

That wistfulness has disappeared today, as downtown Houston explodes with reasons to spend a weekend roaming around the city center. No longer a place frequented only by conventioneers or workers employed in the cluster of high-rises, downtown Houston has become a destination for much more than the Hobby Center for the Performing Arts, the Alley Theatre, and the popular Downtown Aquarium. Forgotten corners and dilapidated buildings fade into hazy memories as old structures with viable bones get new life, and new high-rises take shape.

“I never would have believed how much fun it is to live downtown now,” remarked a friend of mine who recently moved into a loft in a beautifully renovated early 1900s building. “Everything I want to do is in walking distance.”

So what is there for all these new downtowners and visitors to do? Plenty. My recent weekend in downtown Houston revealed vibrant throngs attracted to popular new places for eating, drinking, and relaxing. I found plenty of out-of-town visitors in my midst, as well as Houstonians enjoying the ease of hopping on Metro Rail Houston for the quick light-rail trip into the central business district for an afternoon or evening of play. Some, I noticed, arrived downtown via the newly renovated Buffalo Bayou hike-and-bike trails, or explored the area on Segway tours.

To better appreciate how threads of old Houston weave into the tapestry of the city’s contemporary heart, I found a pair of worthy sites in the northwest corner of downtown, just two blocks south of the Hobby Center. Situated between Sam Houston Park and Hermann Square, the beautifully restored 1926 Julia Ideson Building houses the Houston Metropolitan Research Center’s extensive collection of historic maps, photos, and other records; a reading room; event space; and rotating history exhibits. Across the street, The Heritage Society at Sam Houston Park displays 10 historical structures dating from 1823 to 1905 across 10 verdant acres, offering a window to Houston’s history.

My weekend was filled also with a wealth of gustatory pleasures, all of which mentioned here can be reached by foot within a one-mile journey in downtown, moving north to south.

At the corner of Main Street and Congress Avenue, I found a spot worthy of a long linger over breakfast—and again at lunch. Sitting just across the street from the handsome and recently restored Hotel Icon, The Honeymoon Café & Bar answers a need for anyone jonesing for great coffee, food, and wine. There’s a distinct Parisian bistro feel in the tile floors and café tables and chairs, as well as its smartly dressed crowd. Serving java roasted nearby at Boomtown Coffee, this corner spot persuaded me to nurse another cappuccino while watching the sidewalk traffic from my window seat, long after I finished my BLT croissant topped by a sunny-side-up egg.

Another day, I returned to The Honeymoon for lunch with a friend. Chef Amanda McGraw’s fried chicken-liver po’boy sandwich, garnished with green tomato-onion jam and rainbow chard, won me over, as did my companion’s smoked salmon sandwich with chèvre and tarragon aioli. The Honeymoon keeps late hours for the cocktail crowd, too.

A few doors down from The Honeymoon, The Pastry War casually combines style and theme. Inspired by an 1838 Mexican-French fracas that took place in Mexico long before the Battle of Puebla, Houston cocktail bar genius Bobby Heugel partners with Alba Huerta to infuse French sensibilities throughout their Mexican saloon. Heugel, whose Anvil Bar and Refuge in Houston’s Montrose area has earned national accolades, and Huerta describe Pastry War as a “mezcaleria,” serving spirits the two have curated on visits to Mexico. My husband Marshall and I savored the handmade margaritas—my favorite is the strawberry-balsamic version, while his is the habanero-serrano—and a game of pool, which became livelier as the evening wore on.

Four blocks south, Springbok introduced us to a South African rugby pub experience. While I expected a boisterous and burly crowd, the surprise came in a darkish but dignified and inviting space within yet another historic building. Marshall and I pulled up high stools at the bar for a chat with the bartender, who steered us to a refreshing shandy, a blend of beer with lemonade and bitters.

South African native Peter Walker named the restaurant and bar for the national rugby team of his homeland and included rugby jerseys and trophies of springboks (similar to antelopes) and wildebeest in his décor. We liked chef Seth Greenburg’s interpretation of South African dishes, especially the boerewors, a spicy beef-pork belly sausage that’s grilled and presented topped with beer-braised onion and pickled carrots on a large roll smeared with whiskey mustard. That, we decided, was fit for a rugby player after a rough match. Upstairs, the lounge offers soft leather sofas and a pool table, plus a fabulous balcony overlooking Main Street. 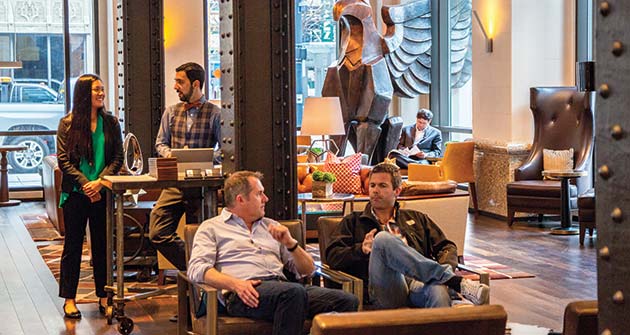 A quick block down Main Street, the elegant new JW Marriott Houston Downtown provided us with a couple of luxurious, restful nights of sleep. Occupying a vintage skyscraper that sat mostly empty for a long while, the building was renovated extensively but retains its stately character, as seen in exposed steel pillars on all 22 floors. My favorite aspect was
the spacious bathroom, complete with an enormous tub with a window view of downtown.

Throughout the JW, I admired a wealth of local artwork, the most magnificent of which is a rendition of the JW’s signature griffin. The 1,500-pound bronze mythical creature by Dallas sculptor Brad Oldham keeps a regal watch over the lobby living room and adjacent restaurant. That restaurant, called the Main Kitchen, flourishes under expert guidance from chef Erin Smith. Among the flavorful treats on her breakfast menu were the gluten-free carrot pancakes, served with yogurt and purslane salad; and blackened Gulf shrimp over cheese grits, the latter sourced from the Homestead Gristmill near Waco.

After wandering through the Discovery Green Flea, the wonderful outdoor market that takes place the third Saturday of each month at Discovery Green, the 12-acre park adjacent to the George R. Brown Convention Center, we walked over to Reserve 101 for a late-afternoon cocktail. We got a kick looking at the sizable collection of domestic and imported whiskey amassed by proprietors Mike Raymond and Steve Long, who have developed a devoted clientele that loves their elixirs. While my husband and I aren’t connoisseurs able to afford the $750 shot of Glenmorangie Pride 1978 that Raymond brought in from Scotland, we nevertheless enjoyed hearing about the visits from famous guests, such as Sean Penn and Charles Barkley. And we found a $30 treat: Raymond’s silky-smooth house special, a bourbon barrel-aged Manhattan, aged on-site for six months.

Before leaving Houston for home, we vowed to return to its downtown as often as possible to enjoy some of the places yet to open. You can bet that when we do, we’ll set aside a leisurely morning for coffee at the Honeymoon, watching—and envying—those happy downtown denizens in their burgeoning new environs.