Walking to the Water

The magic of Gorman Falls 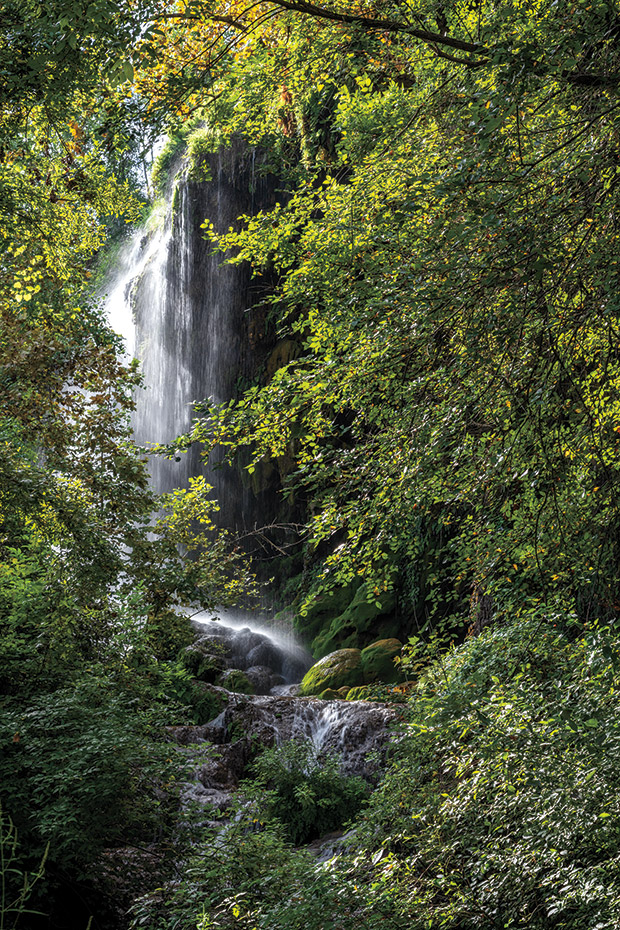 My friend Callie and I had been hearing about Gorman Falls—the 70-foot waterfall that’s the centerpiece of Colorado Bend State Park—for the past few years. So when we wrapped up a weekend getaway to San Saba this past spring, we followed our whims and detoured to the park before the 100-mile drive back to our homes in Austin. Our goal: to hike to the bottom of the waterfall.

While park rangers lead regular tours to the falls, we opted to tackle the three-mile, round-trip hike without a guide. At first, we questioned the wisdom of our decision; even though the map assured us we were headed in the right direction, nothing about the trail indicated that we were walking to water. We hiked single-file along a narrow, bone-dry path, with blistered cacti and yellow wildflowers sloping down from both sides. “It’s like a different planet,” I said to Callie as we navigated the rugged terrain. Instead of rushing water, we heard only the crunching of leaves and twigs under our feet and some faint rustlings.

Animal rustlings? There’s a good chance, confirmed Colorado Bend State Park Ranger Jason Hairston when I caught up with him after our visit. “Our park is very primitive, and it’s wild—that’s part of the appeal,” he explained. Colorado Bend State Park is a prime park for spotting wildlife, he noted, because while it spreads across more than 5,300 acres, the footprint of the infrastructure is pretty small, meaning that much of the park serves as a wilderness area.

During the day, he suggested, we should keep our eyes peeled for some of the 155 species of birds found in the park, including golden-cheeked warblers in the springtime and bald eagles in winter. And if we were camping, we could expect to see deer or armadillos once the sun set. We might even hear from some of the park’s coyotes. “Those are fun to hear at night!” said Jason, who may or may not have been joking.

Before Callie and I had the chance to see anything dart across or fly above our path, though, the terrain dramatically shifted. Suddenly, we found ourselves making our way down a steep hill and headed into a valley. This new, tree-lined path offered a different experience than the sunny path from earlier, and we stopped to marvel at how the differences—especially the soil (much softer) and the lush vegetation (much greener)—made us feel as though we had walked into an entirely different climate.

Holding the rope railings as we steadied ourselves down the steep decline, we soon came face-to-face with Colorado Bend Park’s pièce de résistance: Gorman Falls, a spring-fed, rushing 70-foot waterfall surrounded by cascading moss, ferns, and foliage. From the very beginning of our Gorman Falls hike, we’d encountered surprises at every turn. But this felt as unexpected as a cool day in August. The flowing water was spectacular, but the rich shades of green framing it on all sides truly distorted our sense of place. Were we in Central Texas, or had we suddenly walked straight into Puerto Rico?

“This area of the Hill Country is generally a lot drier, with sparser vegetation,” explained Jason, “so when you do make your way down there, and you see sort of a jungle, and it has the feel of a rainforest, it’s quite a surprise. I think the contrast with the surroundings is what makes it special.”

Jason told us that the view changes in the winter, too, when the trees lose their leaves. “Every time you go down,” Jason said, “it’s a unique experience.”

Depending on the amount of rainfall, the waterfall itself changes during the year, as does the cliff formation, Jason explained. Over time, calcium-rich water deposits (called travertine) form on the cliff structure itself, creating stalactites—icicle-like for-mations usually found in caves. As water runs off over the years, the travertine builds up, sometimes creating crevices that alter the direction of the water’s flow. That’s why they refer to Gorman Falls as a “living waterfall,” Jason told us.

Another big part of Jason’s job is to preserve the park and keep the waterfall “living.” “Being that Gorman Falls is such a heavily visited area,” he explained, “we have to be very careful about saving it … so that in five or 50 years it will provide the same experience that visitors get today.”

We easily could have spent all day, or even all weekend, exploring Colorado Bend State Park. The park offers 35 miles of hiking and biking trails, fishing, swimming, wildlife-viewing, kayaking and canoeing in Lake Buchanan, and even cave tours. We’ll definitely be back to take in more of the park offerings now that we’ve gotten to know its heart, the mesmerizing Gorman Falls.