A holiday retreat to the Gingerbread City 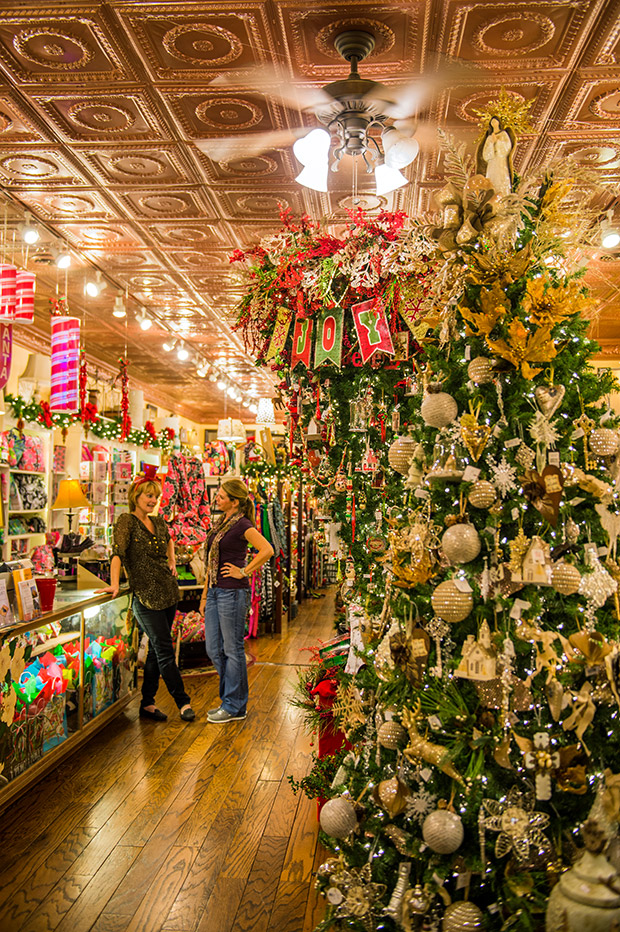 Have you ever noticed that, come December, we tend to focus on pursuits like buying and baking for those we love to the extent that we neglect actually spending quality time together?

For tourism information, including seasonal events, and lodging, call the Waxahachie Convention & Visitors Bureau at 469/309-4040.

To combat this dilemma, my family enjoys occasionally stepping away from the holiday season’s cacophony of crowds, mall madness, and to-do lists. We’ve found exploring a small town full of holiday charm to be an effective antidote to seasonal stressors. Last year, after learning that a town known as the “Gingerbread City” was within a 45-minute drive from our home in Dallas, we loaded up the kids and headed south for a Christmas adventure in Waxahachie.

The evening we arrive, we become acquainted with Waxahachie through a candlelight home tour, which showcases four elaborately decorated homes in different parts of town. The magic of twinkling lights, glowing candles, and festive evergreen accents transforms abodes ranging from an airy downtown loft to a lavish lake house and a charming Victorian (its intricate “gingerbread” cut brackets and frieze boards indicative of the prevalent architecture that inspired the town’s nickname). We chat with the homeowners, sip wassail, and admire the variety of holiday styles.

Next, we decide to get to the heart of the Waxahachie Christmas experience and head to the dramatic production Bethlehem Revisited, held behind the Central Presbyterian Church. The production, now in its 19th year, immerses visitors in a dramatization of historical Bethlehem. Against the backdrop of a rustic, open-air village, more than 200 costumed actors transform themselves into Roman centurions, marketplace vendors, and the central characters of Mary, Joseph, and Jesus.

As we approach the entrance to Bethlehem Revisited, a centurion—imposing with his red cloak, crested helmet, and golden shield and spear—barks, “What brings you to Bethlehem?!” Our 10-year-old son Caleb, a bit intimidated, answers hesitantly, “A census?” The boy’s quick thinking satisfies the guard, who allows us to pass. We walk among the dramatization of various marketplace shops and glimpse scenes of home life, watching women bake bread, children practice writing Hebrew letters, and men carve wood.

As we wander near the torch-lit path, a guard yells to the stroller-wielding woman ahead of us, “Clear thy chariot from the path!” We all scoot out of the way, and a trio of camels appears. Marching just inches from our reach, the lanky creatures seem resolute in their mission to bring their royally garbed riders to the starlit stall where a young man and woman playing Joseph and Mary sit tending a small baby. 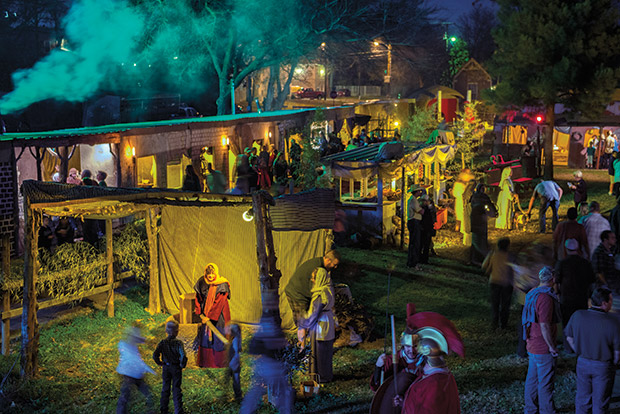 After leaving Bethlehem, we step into the sanctuary of Central Presbyterian Church, where Donald Locke displays his masterpiece The Supper Quilt. Modeled after Leonardo da Vinci’s The Last Supper, the 15-foot-wide quilt uses more than 51,800 half-inch quilt squares to portray Jesus breaking bread with his disciples. Locke worked on the quilt for two and a half years while maintaining his day job as a local dentist. He now spends his retirement showing his creation around the country; he’ll be back at Central Presbyterian this December 4-6 and 11-13.

As dusk turns to star-filled night, we know it’s time to get our tired children some slumber. For a good night’s sleep close to the action of downtown Waxahachie, it’s hard to beat Chaska House, a mansion built in 1900. Now a bed-and-breakfast, it features five rooms in the main house, all named for famous authors. Peering into the Margaret Mitchell room, I note an ornately carved 1850 queen canopy bed, which originally outfitted an Alabama plantation. “Rhett Butler probably slept in that bed,” innkeeper Louis Brown jokes.

The opulence of the Revival-style mansion is tempting, but our brood needs room to spread out. For that, we head across the street to Chaska House’s companion quarters, a three-bedroom cottage called The Retreat. Hidden behind a bamboo grove and shaded by pecan trees, the muted green cottage blends with nature, creating a tranquil getaway. An ode to Ernest Hemingway’s Key West house, the interior is decorated with mounted animal horns, telescopes, and weathered trunks, along with modern furnishings like a whirlpool tub. Croquet sets and a sprawling porch invite guests to enjoy the shaded lawn.

In the morning, we decide to explore Waxahachie’s historic downtown square. Surrounding the striking, nine-story 1895 Richardsonian Romanesque courthouse, the square is lined with antiques stores, specialty shops, and cafés. Even though we’re taking a break from shopping-mall madness, we can’t resist the lovely window displays in the quaint storefronts and decide to dabble in a little retail therapy.

We find a number of treasures in T. Beresford, which features exclusively American-made goods. While I gravitate to the alpaca throw rugs and the line of gentlemen’s candles, Caleb hones in on the bullet key chains, and our girls, Madi and Esther, become fascinated by something not for sale—Willow, the fluffy Irish wolfhound lounging at the back of the store.

A few blocks away, The Briarpatch Gift Stores features one building stocked with trendy handbags, women’s apparel, and jewelry, and another building that focuses on home accessories and decor. Christmastime sees Briarpatch transformed into a winter wonderland with armies of nutcrackers, sparkling reindeer, and a Christmas tree hung upside down from the ceiling that looks as if it will fall from the weight of glittering, golden ornaments.

When it’s time for lunch, we head just off the main square to a 1913 building that once served as a hardware store. Now called the Doves Nest, the establishment features an antiques and gifts store alongside a popular eatery dishing out “new southern cuisine.” The restaurant occupies the hardware store’s former saddle and tack room, transformed with French country elegance by way of buttery yellow walls, a black-and-white-checkered floor, and a pressed-tin ceiling.

In honor of our preschooler learning her alphabet, we start with the ABC Spread—a cheddar spread with almond and bacon served alongside crostini and strawberry jalapeño jam. We also tackle the house burger, a half-pound black Angus patty topped with sharp cheddar and bourbon molasses mustard and sandwiched between a fluffy toasted brioche bun. Those of us with a lighter appetite enjoy the chicken apricot salad sandwich, accented with toasted almonds, sherried apricots, and rosemary honey Dijon mayonnaise. Dessert, a chocolate bourbon pecan pie, consists of an incredibly rich chocolate-chip-studded wedge with the consistency of dense cake. A generous scoop of vanilla ice cream and drizzles of chocolate and caramel sauce top it off.

Walking around the square after lunch, we stumble upon Mosaic Madness, a mosaic and stained-glass studio specializing in “make your own” projects. “This is beautiful!” Esther says as we step into the shop, awash with sparkling glass. The kids browse the various options for mosaic bases and decide on a wooden cutout in the shape of Texas, about one foot square. Then, they select pieces of tile and glass for their project and use a hand-held tile cutter to customize the size of the tiles. Art meets geography when they deliberate over how to arrange the tiles in the shape. “I’m working on the Gulf Coast. You take the Panhandle,” Caleb instructs his sister. And eventually they manage to fill the state in with tile. Their masterpiece appears random in design and extremely colorful, perhaps a fitting depiction of the Lone Star State.

Heading to the car, I hustle our crew past a small downtown museum, but Caleb becomes distracted by its window displays. “Is that a museum? Can we go? I like museums!” he says. And that rare feeling of parenting success overcomes my exhaustion as we turn around to enter the Ellis County Museum. It contains historical exhibits including a cotton field scale from Ellis County’s cotton era, antique guns, and a vintage teller change machine. The girls delight in playing with antique phones, and Madi is both fascinated and alarmed by the permanent wave machine, a torturous-looking beauty device from the 1920s that used electrical currents to curl hair.

From vintage beauty products to historic Bethlehem, we’ve stepped back in time in more ways than one on this trip. Thie gift of oldl-fashioned Christmas experiences is something that our 21st-Century family won’t soon forget.